5 BYU newcomers who could make a splash in 2018 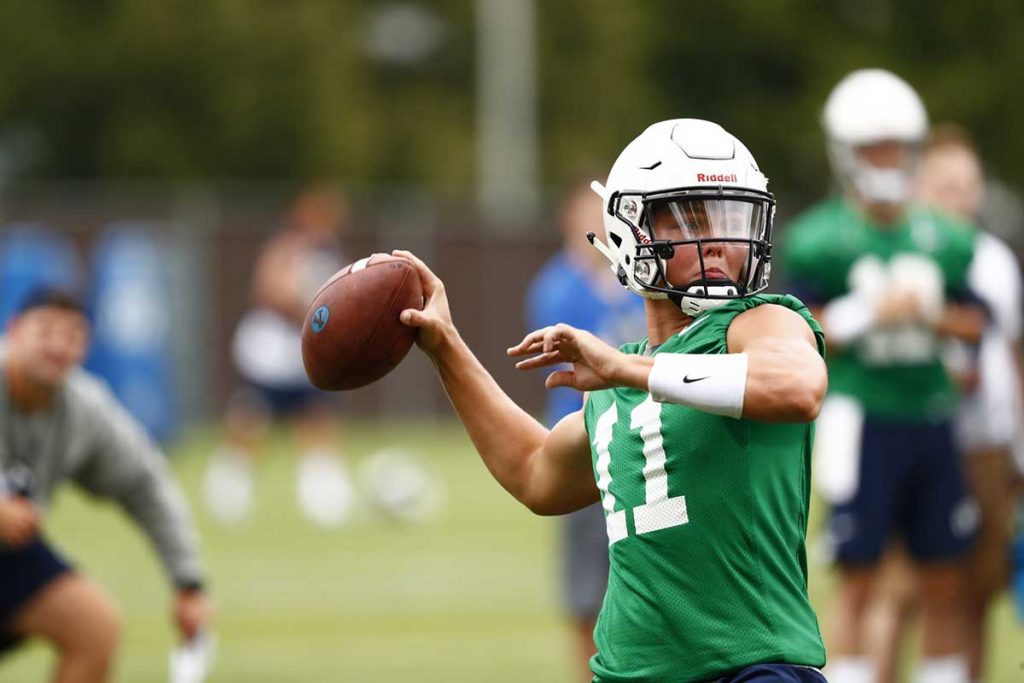 Many position battles are far from settled as BYU opened up its fall football camp on Thursday. That may not be a bad thing for the Cougars as they look to bounce back from a disastrous season.

Competition at quarterback, receiver and other key positions is giving BYU a chance to develop some quality depth. It’s something the Cougars lacked a year ago, once injuries began to pile up as the season progressed.

“Every year is so different, but I like the fact we have a lot of guys competing for spots,” BYU head coach Kalani Sitake said.

A healthy dose of newcomers are pushing for playing time in many of those spots. Transfers now eligible after sitting out a year, returned missionaries and true freshman are all in the mix to make a major impact right away.

Here are five newcomers poised to make a splash for BYU during the 2018 season:

For his final season of football, Collie joined the Cougars as a graduate transfer. The senior put together three productive seasons at Hawaii following his LDS mission. Now he is back at BYU after spending his freshman season in Provo.

Collie brings sorely needed experience and leadership to a young cadre of receivers. He emerged as a go-to threat for the Rainbow Warriors, tallying 1,300 yards and nine touchdowns on 118 career receptions. Collie enjoyed his best season a year ago when he led Hawaii with 636 yards on 56 catches.

Coming from Hawaii to BYU has required some adjustments. The Cougars employ a more traditional scheme than what Collie grew accustomed to in the islands. Still, he is steadily growing comfortable with the nuances of this new offense.

“I’ve never been in a huddle before,” Collie said. “I’ve been in a no huddle with signals and things like that, so being able to hear and understand what the quarterback is saying is a learning curve and that’s something that I’ll need to pick up on and that comes with time.”

No true freshman has arrived on campus with more hype than Romney. He headlined BYU’s 2018 signing class as a 4-star prospect out of Arizona. 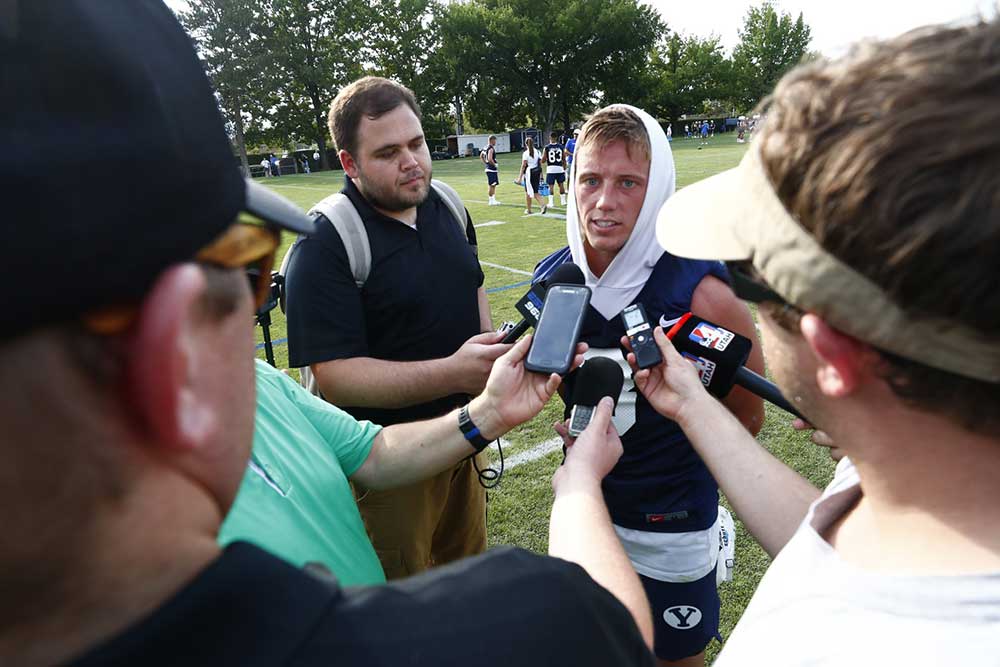 Romney seems to possess all the tools to be a big-time playmaker right away. He totaled 1,554 yards and 19 touchdowns on 80 catches during his final season at Chandler High School. BYU coaches love Romney’s speed and his reliable hands. Even if he doesn’t start right away, Romney will likely be a key receiver in the rotation.

Sitake singled out Romney, along with Collie, as a standout on the opening day of fall camp. He said the coaching staff threw a ton of offensive plays at the new receivers on day one. They rose to the challenge in the way he hoped they would.

“They’re the guys that we thought they would be and I think they’re performing really well right now,” Sitake said.

The Cougars should receive a major boost at the line of scrimmage with Hoge finally eligible to play this season. Hoge originally signed with Notre Dame as a 4-star recruit out of Idaho. He played in six games for the Fighting Irish in 2016 before transferring to BYU.

NCAA rules required Hoge to sit out last season. He didn’t let the time go to waste. Hoge added 10 pounds of lean muscle to his frame. He also prepared himself mentally to hit the ground running once he could get back on the field.

“That year off was beneficial for me in every way, getting my mind stronger and my body stronger,” Hoge said. “People may say, ‘Yeah, it sucks to sit out a year.’ But me, I think of it as a plus. That was a year of preparation that I took full advantage of.”

Hoge will have a chance to grab a starting spot right away on the offensive line. BYU must replace graduated seniors Tejan Koroma, Keyan Norman and Tuni Kanuch. He already has the makings of a fiery vocal leader, something that a mostly inexperienced line sorely needs.

Tanner Mangum’s return to action in fall camp means he is likely the frontrunner to be named the starting quarterback within the next two weeks. It isn’t safe to assume it will be a two-man battle between Mangum and Joe Critchlow.

True freshman Zach Wilson is making a serious push to land atop the depth chart when BYU opens against Arizona. Wilson looked impressive at times during the spring. He has the natural skills he needs to become a successful quarterback from day one.

He’s another headliner from the Cougars’ 2018 signing class and offers a true dual threat dimension that should serve BYU well in future seasons. Wilson tore it up at Corner Canyon HS where he threw for 2,986 yards and 24 touchdowns as a senior. He also added 719 yards and eight scores on the ground last fall.

Kicking field goals was not usually an option for BYU last season if the Cougars could not get inside the red zone. As a team, BYU converted just 14 of 20 field goal attempts, tying for 84th among FBS teams. Starting kicker Rhett Almond made 13 field goals on 19 attempts. Very few of those attempts were 40 yards or longer.

That could all change with returned LDS missionary Skyler Southam in the mix. Southam emerged as  one of the nation’s top kickers before he committed to BYU out of Wasatch High School. He got Cougar fans buzzing about his leg strength in February after posting video clips of 60-yard field goals he kicked at the BYU Indoor Practice Facility and on the Wasatch High School football field.

Southam was rated the No. 1 kicker in the west when BYU originally recruited him. He set state records for single season and career field goals made during his time with the Wasps. As a senior, Southam tallied 20 made field goals. He finished with 36 field goals over his high school career.