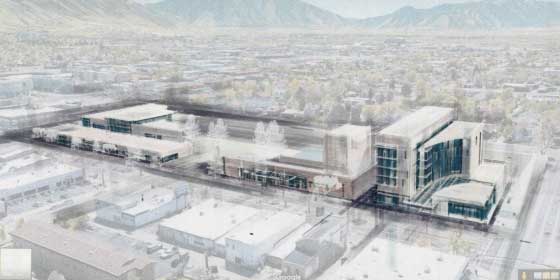 In November, Provo voters will decide whether they want to spend $68.9 million to build a new public safety and city center building in downtown as well as a new fire station.

The city council chose the option over two others on Tuesday. The other choices included moving into the old Sears building at Provo Towne Centre and building a new police and fire facility while making upgrades to the existing city building.

The council voted unanimously to put the option on the ballot, though two councilmen — George Stewart and Dave Knecht — said they preferred the Sears choice.

The new downtown facility could be built at the city center site, at about 350 W. Center St. Or it could be built at another location in downtown. In that case, the city would sell the land on which the city center now sits. If voters approve, property taxes will increase $9.98 per month, or $119.45 per year, for a house valued at $265,000 — the median home value in Provo. Taxes would increase by about $34 per month, or $410 per year, for a business valued at $500,000.

Both the Provo police and fire chiefs supported the new construction choice, also known as Option 3, over the other two.

The police department has 107 officers and about 60 civilian employees working in a space designed for about 50 officers, said Provo Chief Administrative Officer Wayne Parker. It’s already moved the dispatch center to the basement of the nearby Covey Center. But that space is in a flood-prone area. “We do not want to have a significant rain event affect the ability to dispatch emergency services.”

Plus, the current building has failing systems and serious seismic issues, he said. “In a moderate seismic event, the building comes flat down.”

The city will rebuild Fire Station 2, which is at 2737 N Canyon Road, as part of the bond. The city built that station around a home constructed in the 1950s, Parker said. And then the city added on to the structure in the late 1960s. “It’s in pretty serious need of either a very significant investment or construction of a new building.”

Councilman Dave Harding, who voted for the new construction choice, said the decision for him came down to a value judgement. “What do we value? Who do we want to be? Who are we as a community? The city hall is where we conduct the people’s business. I think I want to be a part of a community that is passionate, that cares about things that aren’t just raw numbers. I think there is value in being downtown.”

For Knecht and Stewart, they said they decided to vote for new construction because they want to support police and fire departments.

The majority of people who spoke at the meeting also supported the new construction choice.

“I was against the whole thing until I came to the open house, and particularly the police,” said Provo resident Stephen Lengel. “They’re like sardines. Something needs to be done. We ought to go with something that keeps them satisfied for a long time. … We need to consider more than just money. Let’s do it right in the first place.”

Harding said that the majority of people who participated in the discussion on open city hall also supported the new construction choice. And a survey of 700 likely voters — a scientific rigorous survey — showed the same.

“It’s about what is the intangible feeling of Provo,” said Provo resident Wes Marriott, who supported the new construction choice. “Option 3 is hands-down the best option.”