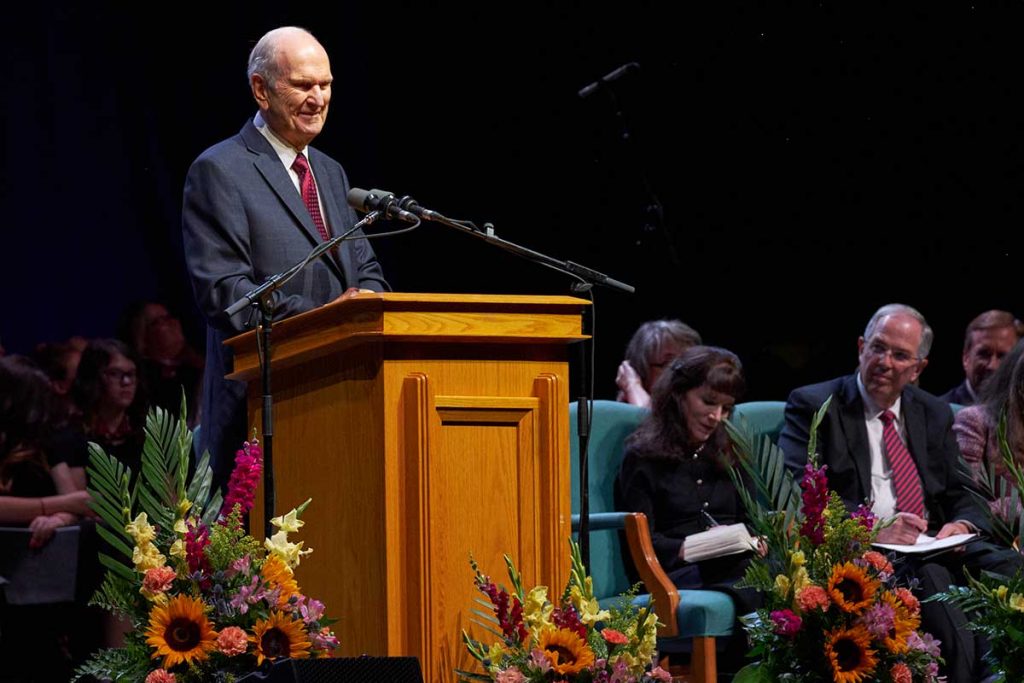 President Russell M. Nelson, prophet of The Church of Jesus Christ of Latter-day Saints, speaks to the congregation in Hamilton, Ontario, Canada in August 2018. (Photo courtesy of Mormon Newsroom)

While on a trip where he was visiting members of The Church of Jesus Christ Christ of Latter-day Saints in Canada, President Russell M. Nelson explained why he made an announcement clarifying the name of the Church the previous week.

“We just want to correct an error, that’s all,” President Nelson told the congregation in Canada.

The 93-year-old prophet of the Church of Jesus Christ was visiting three provinces in Canada along with his wife, Wendy; Elder Neil L. Andersen of the Quorum of the Twelve Apostles; and Elder Andersen’s wife, Kathy. During his speech, he took time to explain the decision the Lord had revealed to him.

“The Lord said the name of the Church shall be The Church of Jesus Christ of Latter-day Saints. Period. That’s not negotiable,” President Nelson said. “So these errors that have crept in are only to be corrected. It’s not Mormon’s church. It’s not Moses’ church. It’s the Church of Jesus Christ. The suffix of Latter-day Saints simply distinguishes us from the earlier forms of the Lord’s true church.”

On Aug. 16, President Nelson released a statement with an updated style guide for referring to The Church of Jesus Christ of Latter-day Saints. The statement said:

“The Lord has impressed upon my mind the importance of the name He has revealed for His Church, even The Church of Jesus Christ of Latter-day Saints. We have work before us to bring ourselves in harmony with His will. In recent weeks, various Church leaders and departments have initiated the necessary steps to do so. Additional information about this important matter will be made available in the coming months.”

During his speech, President Nelson also added that the Church wasn’t “tossing out” the name Mormon.

“We have to be careful to protect the name ‘Mormon.’ The media will think that we are tossing it out. We aren’t,” President Nelson said. “We just want to be accurate. Mormon was a man. He was a prophet. He was a writer, a record keeper. We honor him and treasure the book that bears his name. We’re talking about the name of the Church.”

Elder Andersen added that the decision to furthermore be called by the name the Lord had appointed was a permanent change.

“There is such unity in the First Presidency and the Twelve on this subject,” Elder Andersen said. “The president has spoken; the Lord has spoken to the president. And this is going to be an extended, multi‑year effort, but this will not be something that will be attempted and then pulled back on.”

Provo dancer called 'poster child' of 'So You Think You Can Dance,' advances to Top 6 Next post