Keys to a better season for BYU football in 2018 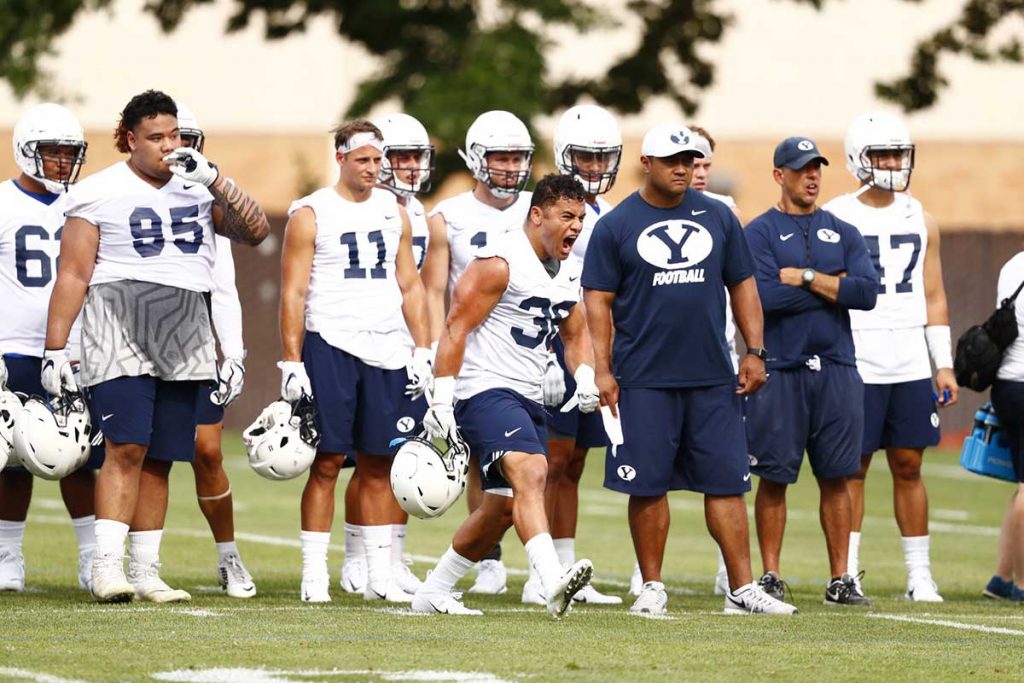 No better example of Murphy’s Law exists than BYU’s 2017 football season. Everything that could go wrong for the Cougars did go wrong.

A flurry of injuries, an inept offense, and an inconsistent defense all combined to help BYU finish with its most losses in a season since 1955. Now, the Cougars are looking to turn the page and write a new chapter. They are cautiously optimistic this latest chapter won’t fall into the horror genre.

“You have to learn from the past and then move on,” senior quarterback Tanner Mangum said. “You can’t dwell on it or let it define you. You just keep going, keep working, keep getting better and looking forward to the next opportunity.”

BYU coach Kalani Sitake shook things up by overhauling his coaching staff on the offensive side of the ball. Only tight ends coach Steve Clark survived last season’s debacle. There’s also some fresh blood on defense. Preston Hadley joined the staff as a safeties coach after Steve Kaufusi resigned as linebackers coach after 16 seasons in Provo.

Will coaching changes translate into a change in fortune? It can go that route if five specific things happen for BYU in 2018:

More than three dozen major injuries through the first half of last season contributed to the Cougars sliding down the win/loss column. BYU got hit hard by the injury bug across the board, particularly at quarterback and linebacker. It forced the Cougars to plug in inexperienced players at several key positions.

Head coach Kalani Sitake moved practice sessions to the afternoon in fall camp to try to alleviate past injury issues from reoccurring.

One other thing BYU has done in fall camp to avoid a repeat scenario is to move players around on both sides of the ball to give younger players more experience. On defense, for example, Troy Warner and Dayan Ghanwoloku both moved from cornerback to safety while Sione Takitaki dropped back to linebacker from defensive end.

Such moves opened the door for the Cougars to develop younger players faster and position the team to better weather another flurry of injuries this time around.

“That’s a great way to baptize them into football is to make them cover the no. 1 and no. 2 guys,” BYU coach Kalani Sitake said. “That change has helped them and it’s helped us.”

Moving the chains and scoring points became an absolute chore last season. The Cougars could not sustain drives when needed. A low point came against LSU when BYU never crossed midfield at any point during the game.

BYU will need to make a huge leap in production from a year ago. The Cougars ranked 119th in total offense among FBS teams with 325.2 yards per game. They ranked 121st in first downs with 16.5 per game and 124th in scoring offense with 17.1 points per game.

Cutting down on turnovers is another priority. BYU finished minus 10 in turnover margin in 2017, which ranked 118th among FBS teams.

Quarterback play must be more consistent

A revolving door at quarterback materialized for BYU last season. Injuries and ineffective play meant that Mangum, Beau Hoge, Koy Detmer Jr., Joe Critchlow and Austin Kafentzis each took a turn behind center. Such a scenario cannot be repeated if the Cougars want to take a step forward in 2018.

Mangum and true freshman Zach Wilson exited fall camp locked into a battle for the top spot. The senior has a likely edge on the starting job because of his overall experience. It isn’t a sure thing, though, with Mangum trying to bounce back from an Achilles tendon injury that ended his junior season in November.

For his part, Mangum is hungry to fully realize the potential he showed as a freshman.

“I’m just giving it everything I have,” Mangum said. “I worked extremely hard recovering from my injury to get healthy and get myself ready to go.”

BYU’s defense must be disruptive

Abysmal offense wasn’t the only culprit in BYU’s struggles a year ago. The Cougars experienced equal difficulties in stopping opponents from marching down the field.

BYU could not put pressure on opposing quarterback. The Cougars forced just 17 turnovers and tallied 17 sacks in 13 games, ranking among the bottom 20 FBS teams in both categories.

Position switches in the defense in the spring and the fall were designed to address that issue. BYU is trying to improve the overall defensive speed. Some players could already see a difference in fall camp practices and scrimmages.

“Overall, you’re just putting guys in spots where they’re able to run around a little bit more than maybe they were able to in their last position,” Warner said. “Just by making little switches like that, it can enhance the speed of the group.”

BYU will not get tested much at home this season. California is the only P5 opponent to visit Provo. The rest of the slate includes Utah State, Hawaii, Northern Illinois, New Mexico State, and McNeese State. These opponents are counterbalanced by a brutal road schedule that could leave the Cougars clawing to get to six wins.

BYU will have road games against Arizona, Washington and Wisconsin in September. Road trips to Boise State and Utah await later in the season. Going 0–5 in those games is a realistic possibility for the Cougars.

BYU can’t afford to throw in the towel if it enters October with a 1–4 or 2–3 record. Getting to six wins is a plausible goal, but the Cougars will need to take care of business against beatable home opponents.

Journey ends for The Pulse on 'World of Dance' Previous post