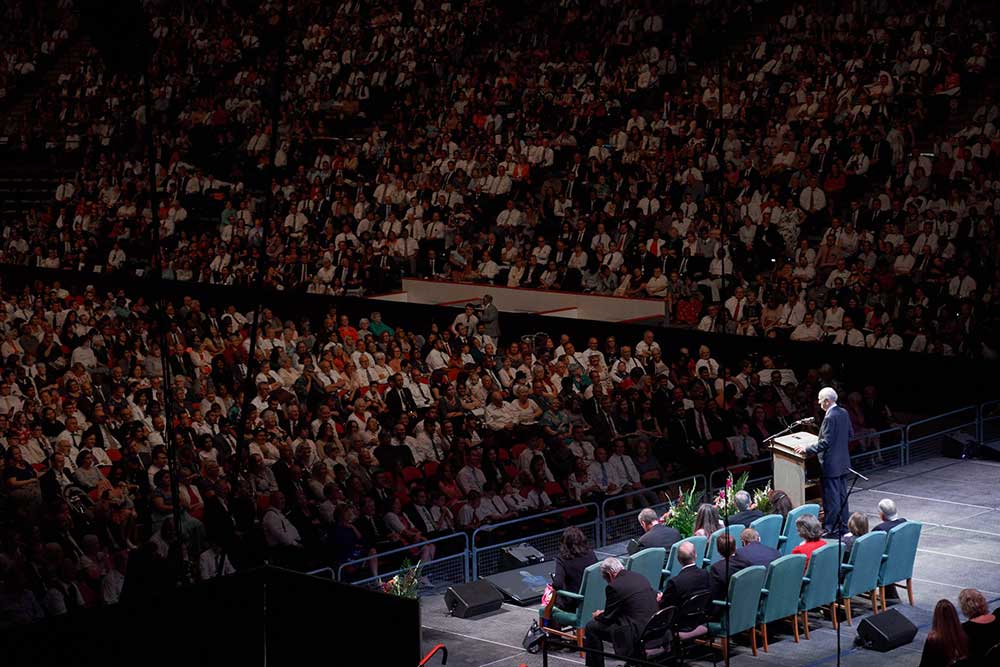 President Russell M. Nelson speaks to the congregation in Toronto, Canada. The prophet of The Church of Jesus Christ of Latter-day Saints visited three provinces in Canada in three days. (Photo courtesy of Mormon Newsroom)

From Aug. 17–19, 2018, President Russell M. Nelson traveled to three provinces in Central and Eastern Canada to address members of The Church of Jesus Christ of Latter-day Saints. The Church’s prophet was accompanied by Wendy Nelson, his wife; Elder Neil L. Andersen, a member of the Quorum of the Twelve Apostles; and Elder Andersen’s wife, Kathy.

“The Lord’s hand was once again strongly evident in the teachings of President Nelson,” Elder Andersen wrote on Facebook. “He walked to the pulpit without any notes. He began by expressing his love and appreciation for those in attendance. His attention riveted on the children and he titled his 45 minutes of counsel, ‘The Sacred Responsibility to Teach Our Children.’”

Elder Andersen wrote that besides reiterating that parents should teach their children that they are children of God as well as about Jesus Christ, President Nelson instructed parents to focus on a few other basic doctrines. Here are the nine essential things to teach children from the prophet, according to Elder Andersen:

5 places to get waffles in Utah County Next post