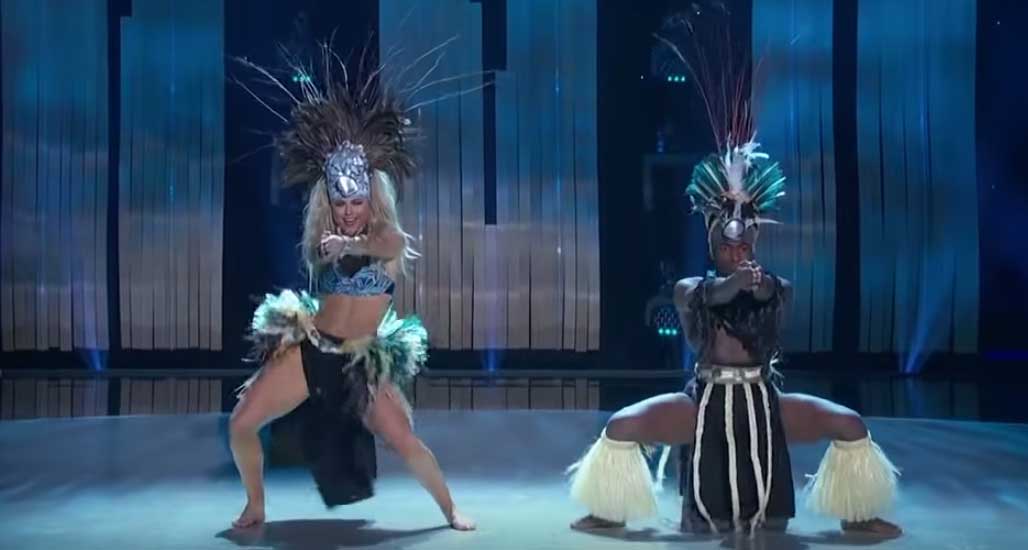 Jensen Arnold and Jay Jay Dixonbey perform a Tahitian dance on “So You Think You Can Dance” on Monday, Aug. 27, 2018. (Screenshot)

Multiple Utah County dancers united on “So You Think You Can Dance” to help Jensen Arnold advance to the Season 15 finale on the show.

For Jensen’s cha-cha routine during Monday night’s show, Jensen’s older sister, Lindsay Arnold, was her mentor and Provo’s Jenna Johnson choreographed the routine. Lindsay Arnold was on Season 9 of ‘SYTYCD’ and has been a professional dancer on “Dancing With the Stars” since 2013. Johnson followed a similar path, gaining attention on Season 10 of “SYTYCD” and then became a troupe member on “Dancing With the Stars” in 2014.

As part of the semifinals, the competitors were asked who had helped them get to where they are today. Jensen talked about her sister Lindsay.

“I remember watching her and wanting to dance up on that stage and do what she is doing,” Jensen said.

Jensen auditioned for Season 14 of the dance competition show, but was cut in The Academy. But she returned to audition again for Season 15 with the support of her family.

“I’m so proud of Jensen. She’s somebody who goes after what she wants,” Lindsay said in an interview for the show. Later she added, “She is not just my little sister. She is Jensen Arnold, the most incredible dancer I have ever seen.”

Season 14 finalist Kiki Nyemchek partnered with Jensen for the cha-cha routine that received rave reviews from the judges.

“It was great to see both of you in your styles tonight,” said judge Mary Murphy. … “Jensen, I just want to tell you that your fast and furious footwork was amazing.”

Judge Nigel Lythgoe added, “You came to us as a really good dancer and you are getting better and better every week.”

The cha-cha was one of three routines Jensen performed Monday night. She also performed a Tahitian routine with partner Jay Jay Dixonbey as well as a group routine with the two other remaining females.

For her routine with Dixonbey, Jensen took on a new style, a Tahitian dance. Tiana Liufau created a routine that represents the waves in the ocean, and consequently, gave the dancers a leg workout.

“Both of you just set that stage on fire,” Murphy told the duo following the routine.

Lythgoe added, “Only Tiana will know if the technique was right. All I can say is, your hips don’t lie.”

At the end of the night, two contestants were eliminated. Through audience votes from the previous week and a final decision by the judges, Dixonbey and Darius Hickman were eliminated from the show.

Coming and going: movies and shows on Netflix in September 2018 Next post