Home Sports BYU Reboot and reload: A breakdown of the BYU football roster for game day

Reboot and reload: A breakdown of the BYU football roster for game day 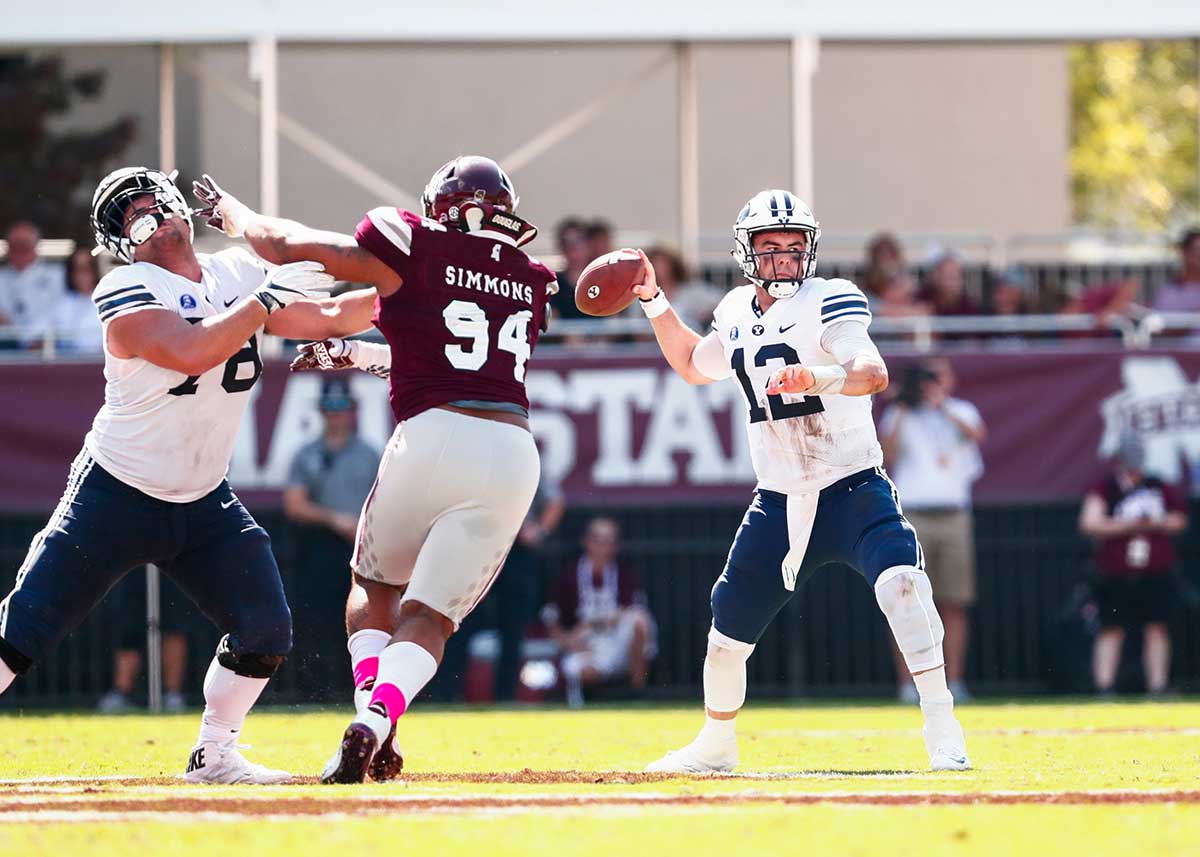 BYU football quarterback Tanner Mangum throws the ball during a game in 2017. Mangum earned the starting quarterback position for the Cougars for the 2018 season. (Photo by BYU Photo)

Everyone involved with the BYU Cougars football team — fans, players, parents, coaches, groundskeepers, cheerleaders and food vendors — agrees that finishing the year 4-9 is not OK. Fine. Done. Can we all take a cleansing breath and move on?

With significant changes to the coaching staff (especially on the offensive side of the ball) and a returning core of players who have learned from losing, the Cougars face a new season full of excitement and optimism.

And we caught their contagious optimism up the street at our Orem office.

Coming off a dismal — and, thankfully, unusual — year that saw BYU finish ranked 118th (out of 129 teams) in total offense, the Cougars have almost nowhere to look but up. New offensive coordinator Jeff Grimes was coaching against BYU last year as an assistant at LSU, but now passes that SEC experience back to Provo.

After a fierce competition all fall camp, senior Tanner Mangum beat out true freshman Zach Wilson to sit atop the depth chart. Mangum burst onto the scene as a freshman in 2015 when he finished with 3,377 yards passing and 23 TDs. An Achilles’ tendon injury against Fresno State cut the 2017 season short, but Mangum has healed and the senior is ready for the season.

The fact that Wilson has competed with Mangum for playing time should be a good sign for depth this year and success in the years to come.

Senior Squally Canada returns as the Cougars’ leading rusher from last season (710 yards, 6 TDs) and is expected to shoulder the lion’s share of touches, but in today’s college football, the backfield is a matter of “the more the merrier.”

Redshirt freshman Lopini Katoa will see touches early in the season as the primary back-up for Canada. Junior Riley Burt has improved in the off-season and is ready for more carries. Four other Cougars have moved to the backfield after playing other positions last year, led by junior Beau Hoge, who saw action last year at quarterback. Tanner Jacobson (safety), Matt Hadley (linebacker) and Johnny Tapusoa (linebacker) have all made the position switch and are in the mix for playing time.

KJ Hall, a junior who had 206 yards and a touchdown last year, and junior Kavika Fonua both start the year injured, but are working to get back on the field.

No matter who gets the carries, they will have a strong lead blocker in senior fullback Brayden El-Bakri, who is a fan favorite for his big hits.

Sophomore Matt Bushman (49 catches, 520 yards, 3 TDs) was the highlight in a receiving corps that most people feel underperformed last season. However, junior Moroni Laulu-Pututau is back from a season-ending foot injury last year and the crew is also bolstered by freshman Lehi High standout Dallin Holker.

A trio of juniors should all provide quality targets for whoever is playing quarterback. Aleva Hifo (37 catches 437 yards, 2 TDs), Micah Simon (27 catches, 386 yards, 3 TDs) and Lone Peak grad Talon Shumway (25 catches, 257 yards) are joined by Hawaii graduate transfer Dylan Collie to move the markers. Sophomore Neil Pau’u started his career with a 28-yard touchdown catch against Portland State and should enter the endzone a few more times this season. Redshirt junior Akile Davis and freshman Gunner Romney add size and depth to the outside.

The offensive line is anchored by a pair of returning starters in senior Austin Hoyt at right tackle and junior Thomas Shoaf at left guard. Senior Ului Lapuaho also has some starting experience and adds depth to the line. However, the rest of the crew is made up of talented but unproven underclassman. Sophomore Tristen Hoge seems ready to step up as the starting right guard, while freshman James Empey and junior Jacob Jimenez are battling for the starting center spot. Sophomore Chandon Herring is also in the mix and adds depth to the crew.

Redshirt freshman Brady Christensen will protect the blind side at left tackle, and
he will be backed up by redshirt sophomore Kieffer Longson.

In 2017, if something positive was happening on defense, it seemed more likely than not that linebacker Fred Warner was in the middle of things.

Well, Fred Warner is playing on Sundays now and defensive coordinator Ilaisa Tuiaki will look for the next crop of athletes to make plays from sideline to sideline.

The defensive front may be one of the Cougars’ deepest spots, with senior Corbin Kaufusi and junior Trajan Pili on the ends and a rotating group of Khyiris Tonga, Merrill Taliauli and Lorenzo Fauatea at nose guard. Add sophomore tackles Bracken El-Bakri and Zac Daw and the front four is even better. Freshman Earl Tuioti-Mariner rounds out the defensive line’s initial depth chart.

Watch for senior Zayne Anderson to turn heads. Anderson will be a major factor in replacing the productivity lost by Fred Warner’s departure.

A trimmed-down Butch Pau’u should get plenty of tackles in the middle and freshman Christian Folau may turn out to be one of BYU’s best middle linebackers.

Senior Sione Takitaki will put more pressure on quarterbacks again this year after moving back to linebacker.

BYU still has a Warner to rely on in the defensive secondary as junior Troy Warner (Fred’s younger brother) will be in the mix at free safety, along with junior Austin Lee. Dayan Ghanwoloku (who, like Troy Warner, saw action at cornerback last year) is expected to make plays as a strong safety. Junior Austin Kafentzis has moved from running back to safety and should add depth and leadership to the defensive backfield.

Seniors Michael Shelton and Beau Tanner will lock down the left corner while junior Chris Wilcox and redshirt freshman Keenan Ellis rotate at the right corner.