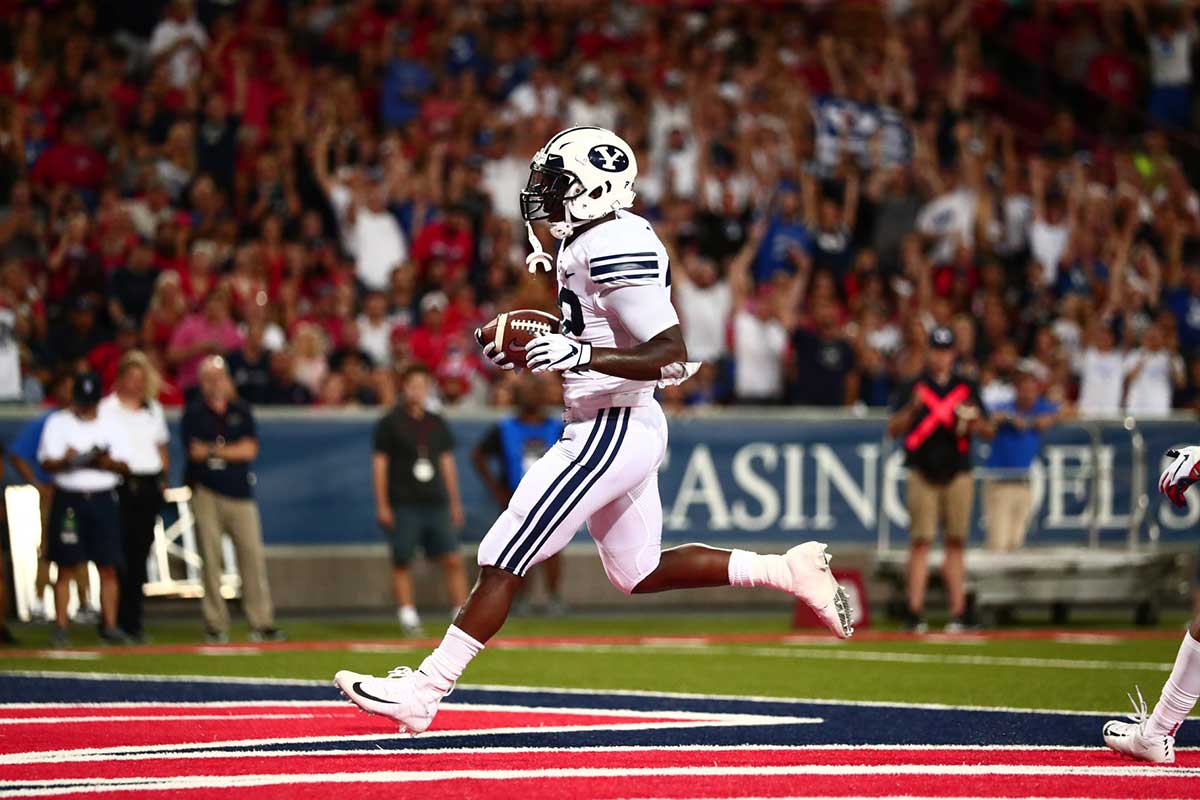 BYU football team started off the 2018 season strong with a 28–23 win over Arizona in the season opener Saturday night at the Arizona Stadium.

The Cougars were led by senior running back Squally Canada, who had three touchdowns and gained 98 yards on the ground on 24 carries. He added two receptions for 29 yards. BYU senior quarterback Tanner Mangum completed 18 of 28 passes for 209 yards and one touchdown.

“We’ve been thinking about this for a long time now so we’re really happy with the team and the ability to get the win and especially at the end, winning it on our O-line’s back,” said BYU head coach Kalani Sitake in a press release. “I think that was really good for Squally (Canada). I’m really pleased with the team and I’m excited to get to work and be at home against Cal next week.”

BYU football will next play its home opener on Saturday, Sept. 8, against the University of California, Berkley.

“I’m so happy for the team,” said BYU head coach Heather Olmstead in a press release. “They believed in each other and were able to accomplish something special. I thought we served tough and came up with big swings when we needed it.”

Jones-Perry led BYU with 16 kills, hitting at a .682 clip. Miller added 12 kills while Haddock-Eppich contributed 29 assists and 12 digs, making this her second double-double of the invitational. Mary Lake led the Cougars in digs with 13.

Both weekend games were part of the BYU Nike Invitational. Three BYU players — Jones-Perry, Haddock-Eppich and Lake — made the all-tournament team, while Jones-Perry was named Most Valuable Player.

BYU women’s volleyball next travels to the Marquette Tournament on Friday, Sept. 7.

BYU women’s soccer team dominated Idaho State in a 10–0 victory over Idaho State Saturday night at South Field. The victory was a team effort with eight Cougars scoring in the game.

“We did a really good job. We came out and wanted to set the tone right away,” said BYU head coach Jennifer Rockwood in a press release. “We put some balls in the back of the net which is how we wanted to break the ice tonight. It was a great team effort.”

BYU next plays in the Deseret First Duel against the University of Utah in Salt Lake City on Friday, Sept. 7 at 7 p.m. MDT.

“Soccer can be cruel, and today, full credit to CSUN as they took advantage of each of our mistakes. We’re a young group, eager to learn, but today we learned some tough lessons that each of us took to heart,” said UVU head coach Greg Maas in a press release. “Our start to the second half was fantastic. We earned a great equalizer, but quickly found ourselves chasing the game again. We’ll get back to the training grounds, and I’m confident our team’s response will be nothing short of professional as we prepare for another tough road trip to Omaha.”

The Wolverines (3-1-0) next travels to Omaha on Friday and against Memphis on Sunday in a match that will be played at Creighton.

“This was a great win here against Long Beach State. I was very pleased with how we were able to respond after dropping that first set, and proud of the girls for their efforts,” said head UVU coach Sam Atoa in a press release. “Our outsides were very good for us and our two setters did a nice job of running our offense. Overall, we’re happy to come home after taking two of the three matches and will be looking forward to hosting Utah State on Tuesday.”

UVU next has an in-state battle against Utah State on Tuesday, Sept. 4 in Orem.

Reboot and reload: A breakdown of the BYU football roster for game day Previous post