Fan-tastic feats: BYU gets social with box drops nationwide and cutting edge technology inside the stadium 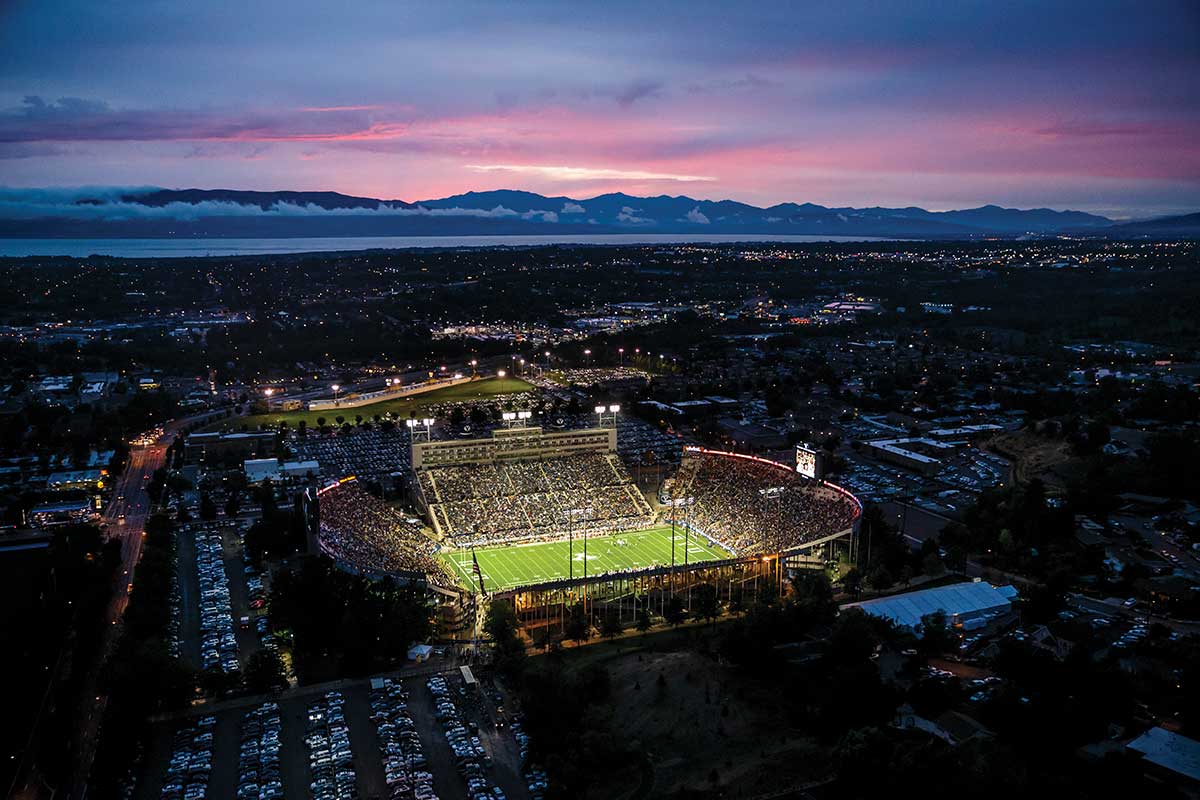 BYU has improved the gameday experience with better Wi-Fi in LaVell Edwards Stadium and an app. (Photo by BYU Photo)

The BYU football program is not just about its roster — it expands to its fans. That must be why BYU football extends the gameday experience through #BYU50 and now the social media and technology advancements inside LaVell Edwards Stadium.

For 5 years, Cougar fans have counted down to kickoff with swag-filled social media scavenger hunt #BYU50.

Five years ago, the BYU marketing department — led by assistant athletic director David Almodova — wanted to get local fans excited about football in the dog days of summer leading up to fall camp.

“We decided to do an in-state promotion through social media with a box of swag,” David says. “We posted the location on social media and the first one there got the box.”

Twenty-five boxes were placed from Logan to St. George with nothing more than an Instagram post as a clue. The response was as intense as a CougarBoard discussion on the Big 12.

“Fans from all around the country were asking, ‘What about us?’” David says.

And the fans were ready.

In Louisville, Kentucky, the box was intended to be dropped near the famous Louisville Slugger statue, but hundreds of BYU-clad pedestrians were already lying in wait at that location. BYU chose a second spot at Churchill Downs. That, too, was overrun with good guessing BYU folks.

“We finally went to a bridge, put down the box and posted a picture,” David says. “People started coming almost immediately, and it was like a movie with people flooding toward the box.”

Not only do BYU fans love the chance to win free gear, but the gatherings become mini-alumni parties with people making connections and celebrating the Cougars. As the phenomenon has grown, so has the level of the gear.

“Nike designed one-of-a-kind items specifically for our box,” David says. Items like a long-sleeve workout shirt with a print of Taysom Hill hurdling Texas defenders and a royal blue T-shirt that simply says “1984.” Another highlight of the 2018 giveaways was white shoes with “BYU” embroidered on one shoe and “50” on the other. If you missed the box this year, get ready for 2019.

“We have people who tell us they take the day off from work and drive around with their kids trying to find the boxes,” David says. “We have unique, amazing fans who love BYU.”

Smartphones are the name of the game with tech-friendly stadium upgrades.

Fans walking into LaVell Edwards Stadium this season can have mobile access to instant replay, real-time statistics and social media reactions — all on improved cell and Wi-Fi systems that rival those at the top NFL stadiums.

“As technology has grown and changed the world, we want to make sure we keep up,” says Duff Tittle, associate athletic director at BYU.

With that in mind, BYU worked closely with Verizon wireless to install a new distributed antenna system in 2017. The DAS improved the overall productivity of cellular phone coverage across various carriers, meaning cell service has been better inside the stadium since the 2017 upgrade.

The second phase of improvement was completed in time for this 2018 season. BYU installed the best large-venue Wi-Fi coverage available in college football. LaVell Edwards Stadium is one of the first college venues to implement a Wi-Fi offload solution, which is used in many NFL stadiums.

The two systems together will offer LES fans and vendors the best in large stadium connectivity. They will also allow vendors and ticket-takers to implement mobile point-of-sale systems and mobile ticketing, for added game-day convenience.

With improved connectivity, BYU is rolling out a game-day app for mobile devices. The app will improve the game experience by supplying real-time statistics, on-demand highlight and replay videos, live radio broadcasts and an interactive social media component.

“We are also including a new social media ribbon board, which will improve the stadium experience and allow fans to interact with one another on a different level,” Duff says.