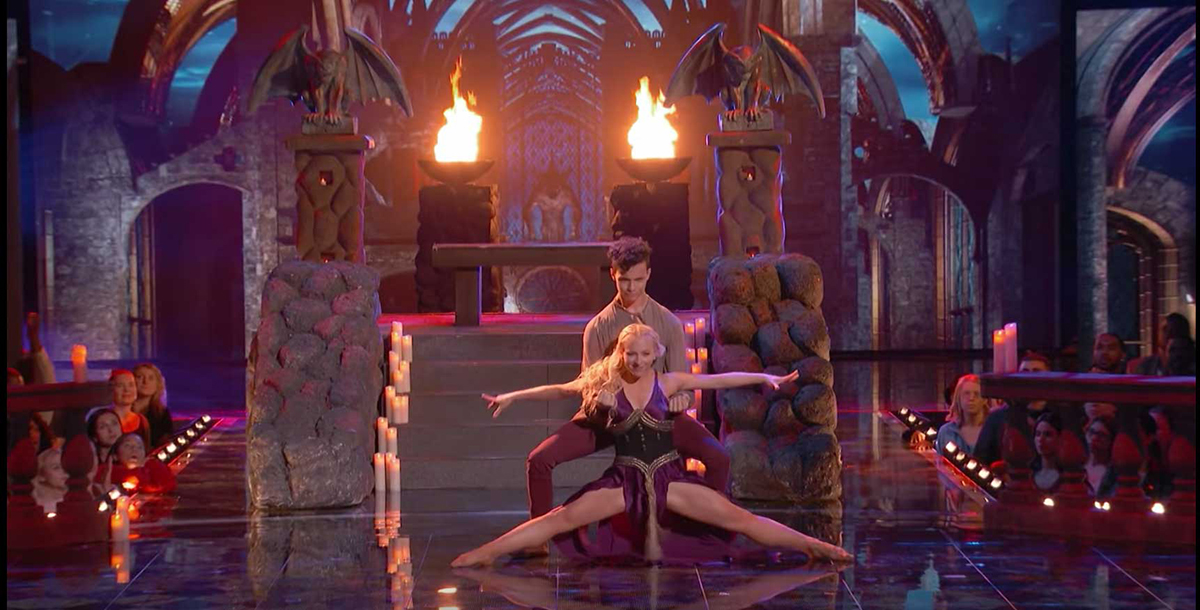 Charity Anderson and Andres Peñate earned a 93 to win the Junior Divisional and advance to the World Final on “World of Dance.” (Screenshot)

A broken toe wasn’t going to keep Charity Anderson from performing in the Divisional Final on “World of Dance” Wednesday night.

Anderson, who is one-half of a Charity and Andres duo act on “World of Dance,” fell four days before the performance. The impact from the fall broke her toe.

“We were really nervous,” Anderson said. “This is my dominate foot, which I land on and jump off of, so we had to switch my dominate side to my right side.”

Along with her partner, Andres Peñate, the two made adjustments to their routine, taking advice from the show’s host, Jenna Dewan, to have Peñate take more of the “control” in the routine.

“I didn’t even want to think about dropping out of this competition because we’ve come so far,” Anderson said on the show.

And the toughness paid off for the Springville duo — they won the Junior Division.

“As dancers, so much of our balance and groundedness comes from our feet, so the fact you could do that with a broken toe, just demonstrates what a powerful dancer you are,” said guest judge Misty Copeland.

The judges commended the two on demonstrating a solid partnership.

“Andres, for you this was a stellar routine. You got to shine in this one,” said judge Jennifer Lopez. … “I think you guys were amazing tonight.”

In the end, the judges gave Anderson and Peñate a 93, which edged out hip-hop fusion duo Sean and Kaycee (92.3) and fellow Utah County contestant Jaxon Willard (87.8).

Willard, a solo performer from American Fork, saw his “World of Dance” journey come to a close following his performance to Johnny Manuel’s “Blind Faith.”

“Beyond this show, beyond dance and everything, you are enough — you always have been,” judge Derek Hough told Willard. “This performance was great, but I wanted to see a little bit more.”

The “World of Dance” finals are on Wednesday, Sept. 12 at 7 p.m. MDT on NBC. Anderson and Peñate are one of four acts who will compete for the $1 million grand prize on the finale.

Fan-tastic feats: BYU gets social with box drops nationwide and cutting edge technology inside the stadium Next post