Home Sports BYU The long and winding road: Dylan Collie finishes his journey back where it started — Provo

The long and winding road: Dylan Collie finishes his journey back where it started — Provo 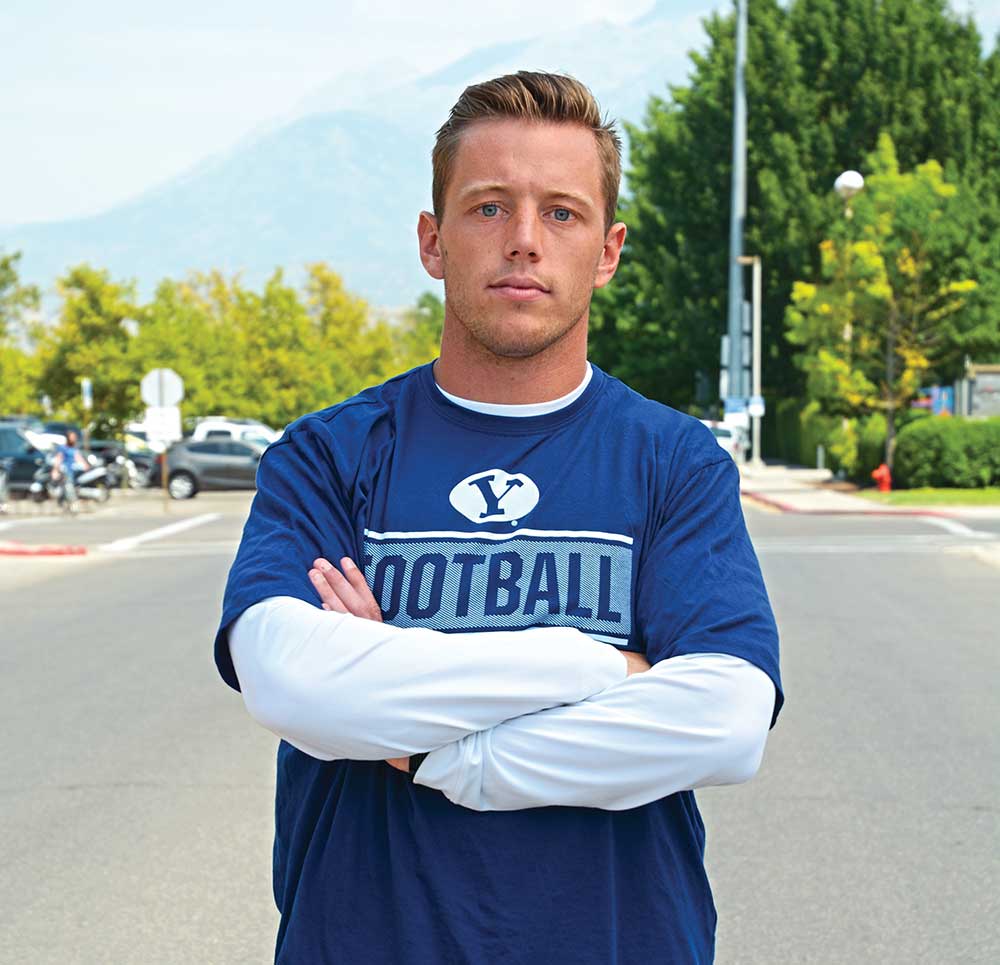 Dylan Collie’s long road back has him ending his college career where he had always planned on playing — LaVell Edwards Stadium. (Photo by Dave Blackhurst/UV Mag)

Dylan Collie knows what it means to wear the blue-and-white with the “Collie” name on the back. He’s been attending games since he was a 6-year-old fan, watching his older brothers Austin and Zac catch touchdowns in LaVell Edwards Stadium.

Even before the Collie brothers were born, their dad, Scott, was playing for the Cougars (wearing No. 3, as well). And mom may be the biggest BYU supporter of them all.

“People who know Nicole Collie know she’s all about this place,” Dylan says.

So, while seeing Dylan on the field for the Cougars in his final year of eligibility may seem like a no-brainer, it has been a long road to get to LaVell Edwards Stadium, with the route taking him from Virginia to Hawaii.

Where everybody knows your name

Despite his family legacy, Dylan had a difficult time getting the attention of college recruiters as a high school star at Oak Ridge High in El Dorado Hills, California. However, his junior year, Brandon Doman and Ben Cahoon were hired on the BYU staff and the pair saw something in Dylan, offering him a scholarship to play for the Cougars.

“I wanted to commit right on the spot,” Dylan remembers. “I waited a couple of months and received a few more offers, but then I committed to BYU. It was a great opportunity to be the last one in the Collie family to play there. That’s unusual. That’s special.”

His plan was to come in and make an immediate impact as a true freshman, just like his brother, Austin, who took Provo by storm as a freshman in 2004, finishing with 53 receptions for 771 yards and 8 TDs.

Dylan redshirted the year before his LDS mission.

Leaving on a jet plane

Dylan’s next stop took him to the Virginia Richmond Mission where he began to consider a change of scenery for his post-mission life.

“While I was in Virginia, there were some changes at BYU and I started to take a look at the bigger picture,” he says. “I decided I need to go somewhere else — not just for football, but for everything else in my life, too.”

After emailing back-and-forth with his parents about his decision, he eventually committed to transfer and play for former BYU offensive coordinator Norm Chow, then the head coach at Hawaii. Dylan had a sister and brother-in-law in Hawaii, and the timing seemed right to move to Oahu.

Standing at the crossroads

After three seasons at Hawaii — where Dylan played 39 games and had 118 receptions for 1,300 yards and nine touchdowns — and with a bachelor’s degree in hand, Dylan again had a choice to make. He could start graduate school at Hawaii and stay for his last year of eligibility or he could take advantage of the NCAA’s graduate transfer rule and be immediately eligible to play at another school.

“My wife and I loved the culture, the people, the beach,” he says. “But I had to ask myself what I wanted to do with the rest of my life. Once I figured out the right decision for me, I never looked back.”

He opened up his recruitment again and looked seriously at Vanderbilt and Wake Forest. However, when BYU showed interest, the pull to Provo was too much to resist.

“I knew I would have seven months to finish the legacy that is the Collie family at BYU,” Dylan says. “That pressure is what I need. I want that pressure to live up to the family name. I know the expectations that come from being a Collie and playing receiver at BYU. It’s a perfect situation for me.”

While the journey wasn’t what any of the Collies expected, Dylan is ready for his senior year in a Cougars jersey. He’s worked hard over the summer to learn the offense and gel with his teammates.

“I’ve had the chance to learn from guys who have been coached by different people,” Dylan says. “I am trying to learn from my fellow receivers and find my place. I’m here to help the team win. I’m not here for attention and limelight.”

At the same time, his 39 games as a Division I receiver means Dylan has experience that will help a young BYU receiving corps make the leap.

And Cougar fans are ready to hear, “Touchdown, Collie!” a few more times.

Warm welcome: A hairstylist and mother-of-four opens her parade home with an open heart Previous post

Utah Valley Parade of Homes review: Great rooms that are grand Next post