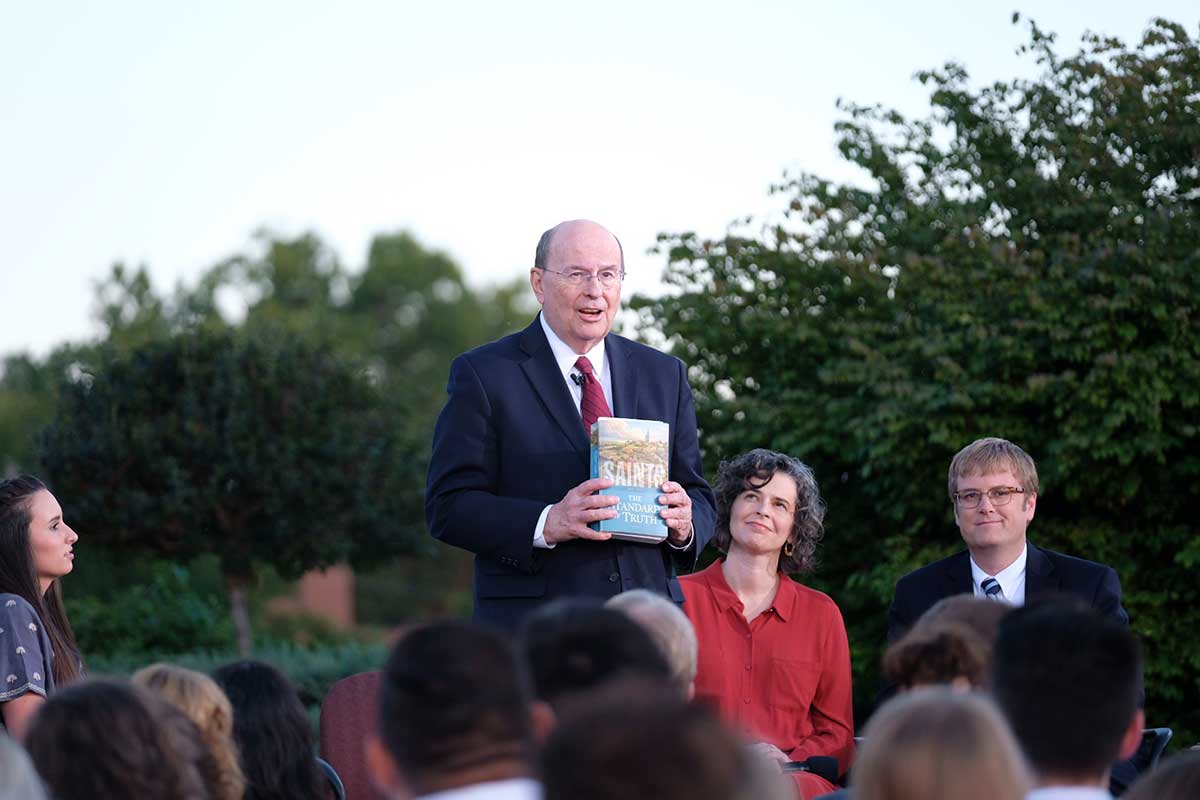 Elder Quentin L. Cook of the Quorum of the Twelve Apostles was joined by Church historians Kate Holbrook and Matt Grow to discuss the history of the Church as share in the newly-released book, “Saints: The Story of the Church of Jesus Christ” in the Latter Days during a worldwide devotional with young adults September 9, 2018. (Photo courtesy of Mormon Newsroom)

Elder Quentin L. Cook of the Quorum of the Twelve Apostles for The Church of Jesus Christ of Latter-day Saints along with two Church historians answered questions about the restoration of the Church at a worldwide devotional with young adults in Nauvoo, Illinois on Sunday night.

Prior to the question and answer segment of the broadcast, Elder Cook introduced the Church’s new historical text, “Saints: The Standard of Truth,” on the restoration of the Church. The book begins in 1815 with Joseph Smith’s childhood and ends with the pioneers worshipping in the original temple in Nauvoo in 1846 before they headed west to flee persecution. Elder Cook emphasized the importance of studying the history of the Church.

“In learning more, we will bind our hearts together with saints of yesterday and today,” Elder Cook said. “We will find examples of imperfect people who went forward with faith and allowed God to work through them to accomplish His work. In doing so, we will see better how we can work through imperfect people like you and me. I promise you that studying the history of the Church can deepen your faith and desire to live the gospel more fully.”

Elder Cook was joined by Church historians Kate Holbrook and Matt Grow, who helped answer the young adults’ questions about Church history accounts. Here are a few of the answers on controversial topics the panel of three shared:

The question and answer section opened with a question on the transparency of the Church with its history.

“The desire of the brethren is to be as transparent as possible in both Church history and doctrine,” Elder Cook said.

Grow gave an expanded explanation in working with Church authorities during his time helping with “Saints,” which has been in the works for six years.

One question asked if there were any sources outside of the Church that people could look to in order to learn more. Grow cautioned using Google to find sources, but pointed to history.lds.org, the online accompaniment to “Saints.” He said the Church has linked to sources on the site that are not associated with the Church.

In the end, Grow reminded listeners that it isn’t about finding answers, but learning to discern answers.

Holbrook, who descended from two polygamous families, drew on her own lessons she has learned from her ancestors to answer questions about polygamy, which was practiced by a select group of early Latter-day Saints for about 50 years.

“There are rare exceptions where the Lord commands us to practice polygamy in order to raise up a righteous heritage,” Holbrook said. …”This is the rare exception.”

Holbrook also addressed concerns about the practice of plural marriage after this life.

Varying accounts on the translation of the Book of Mormon

“His translation experiences were sacred and very personal and he just didn’t give us that much, but luckily he had scribes,” Holbrook explained.

Throughout his life, the prophet Joseph Smith was asked at different times to share his story with different audiences, Grow said, which would have varied from memory and what he felt he should share at that time.

“Think about your own sacred experiences. How easy is it to be put into words?” Grow said. “As I’ve thought deeply about these accounts, rather than be troubled by them, I feel like we should celebrate that we have multiple accounts because they give us new insight, new perspective.”

If people have questions, Grow encouraged them to read the gospel essay on the translation of the Book of Mormon on lds.org.

Rise up: Point of the Mountain serves a taste of China at The Rising Bun Previous post