Stop and smell the turf: behind the scenes of LaVell Edwards Stadium turf upkeep 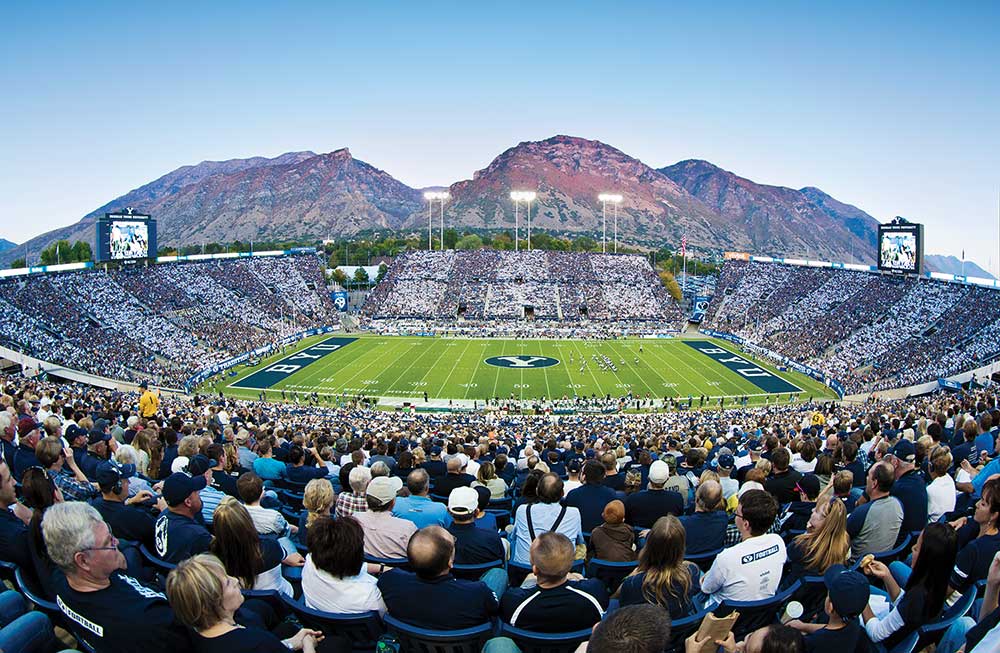 Painting the turf of the LaVell Edwards Stadium takes two and a half days and 60 man-hours. (Photo by BYU Photo)

BYU football fans know their team works hard in practice so they can leave it all on the field come game day. What fans might not know is that the grounds grew puts just as much effort into preparing the field at LaVell Edwards Stadium for a home game.

Before each BYU football home game, the grounds maintenance team — headed by BYU alumnus Jon Quist — spends 60 hours painting the end zones, letters and logos on the field. This two-and-a-half-day process requires three people on the field at all times to use the walk-behind painter and two hand wands. This painting ritual is coordinated with mowing, top dressing and fertilizing throughout the year — all while adapting for weather conditions.

Click on the infograph for a closer look. (Infograph by UV360)

On the first day of painting — usually a Wednesday — the crew will use the white paint to do all the numbers and letters on the turf of the LaVell Edwards Stadium. The second day is spent painting the end zones and logo in the center of the field. On the third day of painting, they break out the blue paint to ring all the letters and numbers and fill in the centerfield logo. The blue paint process only takes half of the day.

To create the paint mixture, Quist and his team dilute a specialized turfgrass concentrate at a 1-to-1 ratio. They create 60 gallons of white paint and eight to 10 gallons of blue paint for each game. The tint of the blue might appear slightly different for each game depending on how much water they eye into the mixture, the camera angle or even the lighting on game day.

“Every week it might be a bit different,” Quist said. “We mix water with the paint, so it’s not an exact science.”

Roll with the touchdowns

Taking two and a half days is the normal and ideal turf-painting process, but the maintenance team regularly has to adjust to weather, special events and scrimmages.

“There are a lot of variables that come into the preparation for a game,” Quist said. “Every game is different. November games are different than September games. We can only prep three to four hours in a day in November because of weather.”

In the summer months, the paint only takes 30 minutes to dry, but in October and November, the paint can take two days or more to dry completely, often bumping that painting start time to a Monday. Sometimes the paint is still a little wet during the game.

In the spring, the maintenance team will cover the turf with four large growth tarps to create a greenhouse on the field. This warms up the soil and brings the plants out of their winter dormancy a month earlier than the natural process. Then in mid-October, they will tarp the turf between games to maintain its growth for as long as possible. This sometimes creates a challenge because the turf paint won’t dry while covered. To coordinate the painting and the covering to have the greenest and driest field on game day.

During the offseason, Quist’s team may not be painting, but every day from the beginning of March to the end of November they work to keep the turf in touchdown condition. They usually mow three times a week to keep the grass at a one-inch mowing height.

“We do that because it maintains a nice, thick, dense turf,” Quist said. “We have to be consistent. We can’t wait a week until it’s long because that’s too much stress on the grass.”

They also use the off-season and the away-game weeks to aerate the field three of four times in the year, fertilize five times a year and top dress three times a year.

Greener on the Provo side

One of the biggest challenges Quist faces isn’t the weather or nature. It’s coordinating the turf maintenance with the other events and set up that have to happen on the field in between games.

Between all the challenges inspired by nature or human logistics, Quist praises the grass-growing abilities of Utah’s climate.

“We’re really fortunate here in Utah because we don’t get a lot of rain, but we have adequate water,” Quist said. “The weather is pretty consistent. It’s one of the easiest places to grow good grass.”