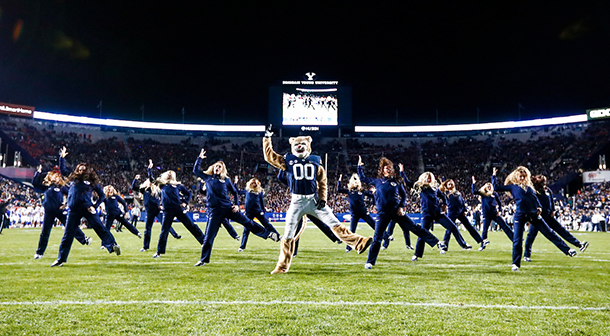 Cosmo the Cougar performs with the Cougarettes at BYU football’s halftime show in 2017.
(Photo by BYU Photo)

BYU football had a solid showing on Saturday when the team defeated McNeese State 30–3. However, the university’s mascot had a fumble on the sidelines. Cosmo the Cougar lost his head, literally.

During a third quarter break at the BYU football game at LaVell Edwards Stadium, Cosmo attempted a tumbling stunt that flung his head across the field. As Cosmo landed his flip, he quickly covered his head while his squad quickly gathered his head to preserve his identity.

Fans reacted to the unforunate event:

Where were you when @byu_cosmo was decapitated in the third quarter? 😂👍🏼 https://t.co/0GBAzFPvT2

Cosmo unmasked and his real identity revealed as Clark Kent.

While Cosmo has another viral moment, BYU football improves to 3–1 on the season.