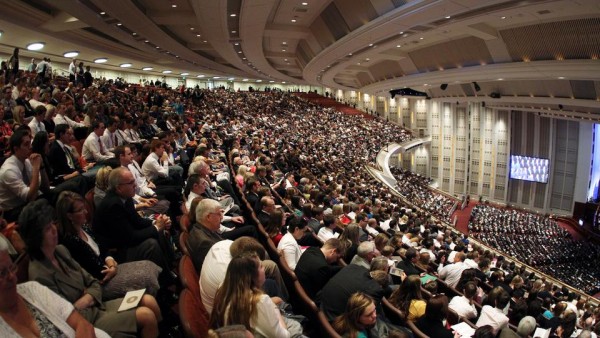 The Church of Jesus Christ of Latter-day Saints will now use the hashtag #generalconference to join the conversation on social media during general conference. (Photo courtesy Mormon Newsroom)

The Church of Jesus Christ of Latter-day Saints introduced a new hashtag for the 188th Semiannual General Conference. Replacing #ldsconf, the Church is encouraging members to use #generalconference across social media platforms, the Church announced on social media Thursday.

— The Church of Jesus Christ of Latter-day Saints (@LDSchurch) September 27, 2018

During the two-day worldwide conference — which begins on Oct. 6 — members attend five two-hour sessions where Church leaders will share messages over the pulpit. This conference includes the General Women’s Session on Saturday, Oct. 6, at 6 p.m. MDT. Members are invited to share their general conference experiences on social media; they join the conversation by using the Church’s appointed hashtags.

This hashtag change comes after President Russell M. Nelson released a statement on Aug. 16 updating the style guide for referring to name of the Church. The statement said:

“The Lord has impressed upon my mind the importance of the name He has revealed for His Church, even The Church of Jesus Christ of Latter-day Saints. We have work before us to bring ourselves in harmony with His will. In recent weeks, various Church leaders and departments have initiated the necessary steps to do so. Additional information about this important matter will be made available in the coming months.”

While speaking to members on a trip to Canada, President Nelson further clarifyed the emphasis on using the full name of the Church.

“The Lord said the name of the Church shall be The Church of Jesus Christ of Latter-day Saints. Period. That’s not negotiable,” President Nelson said. “So these errors that have crept in are only to be corrected. It’s not Mormon’s church. It’s not Moses’ church. It’s the Church of Jesus Christ. The suffix of Latter-day Saints simply distinguishes us from the earlier forms of the Lord’s true church.”

The Church also updated its recommended hashtag page to include the new hashtag. While the hashtag for general conference has changed, the style guide has not been updated on other hashtags using “LDS.” Some hashtags currently maintaining the term “LDS” include:

Coming and going: movies and shows on Netflix in October 2018 Previous post