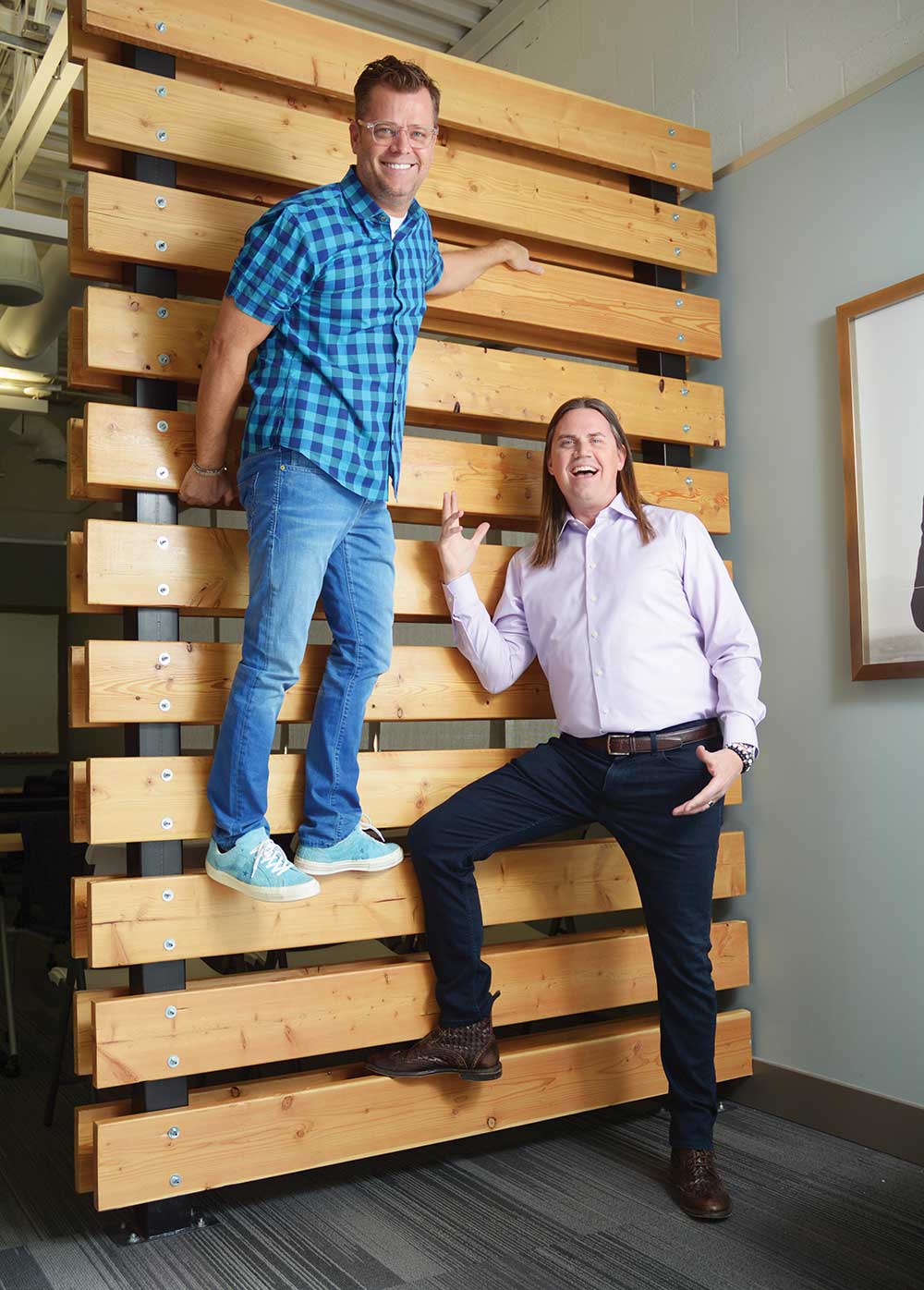 UVBQ HALL OF FAME
BusinessQ’s Hall of Fame is adding two faces: Josh James of Domo and Andrew Smith of Four Foods Group. Both hit Triple Crown this year, which means their companies have landed on all three sections of the UV50: Startups to Watch, Fastest-Growing Companies, Economic Engines. The only previous Triple Crown winner has been Ryan Poelman of Nudge. Our cumulative Hall of Fame also includes those who have received the BusinessQ Lifetime Achievement Award. Previous winners include Fraser Bullock in 2016 and David Bradford in 2017. Congratulations to all five BusinessQ Hall of Famers! (Photo by Dave Blackhurst/UVBizQ)

Josh James and Andrew Smith both grew up in Chicago — just one school away from each other. They wrestled and played soccer (and there’s a prize for anyone finding a pic of them in uniform going against each other). These two are known for their flowing locks, and they both say “freaking.” They’ve each been on the cover of BusinessQ, and this year they’ve both earned a Triple Crown in our 2018 UV50 — which means their companies have appeared in all three categories of our annual list: Startups to Watch, Fastest-Growing Companies, Economic Engines. This feat has only been accomplished by one other company (Nudge) in BusinessQ’s 11-year history of naming the valley’s top businesses. Set aside your MBA rulebook to hear these two car lovers talk through the stages and lessons of the ages.

Josh James As a startup, there aren’t as many naysayers in the room. Everyone is making the Kool-Aid, drinking the Kool-Aid, serving each other IVs of the Kool-Aid. The downside — especially when it’s your second or third startup — is that it’s flat-out hard work. And you can’t delegate it! I tried to delegate some of it the second time around, and it doesn’t work. Founders have to be the ones who make things go.

Andrew Smith The startup phase is intimidating. Everybody thinks you’re foolish, stupid and that you’ll never get funding. It’s hard to talk people into coming on board to duel with you. You have to convince them you’re the smartest guy in the room with the best mousetrap. You’re selling yourself and your idea, and it’s precarious. It’s a small room of guys and girls saying, ‘What the hell are we going to do today to make tomorrow still relevant?’ What I love about the startup stage is being agile. If it’s not working, you shift. But I’m never going to start another company. It’s been hard all four times. I’ll go to work for Josh James before I start another company. 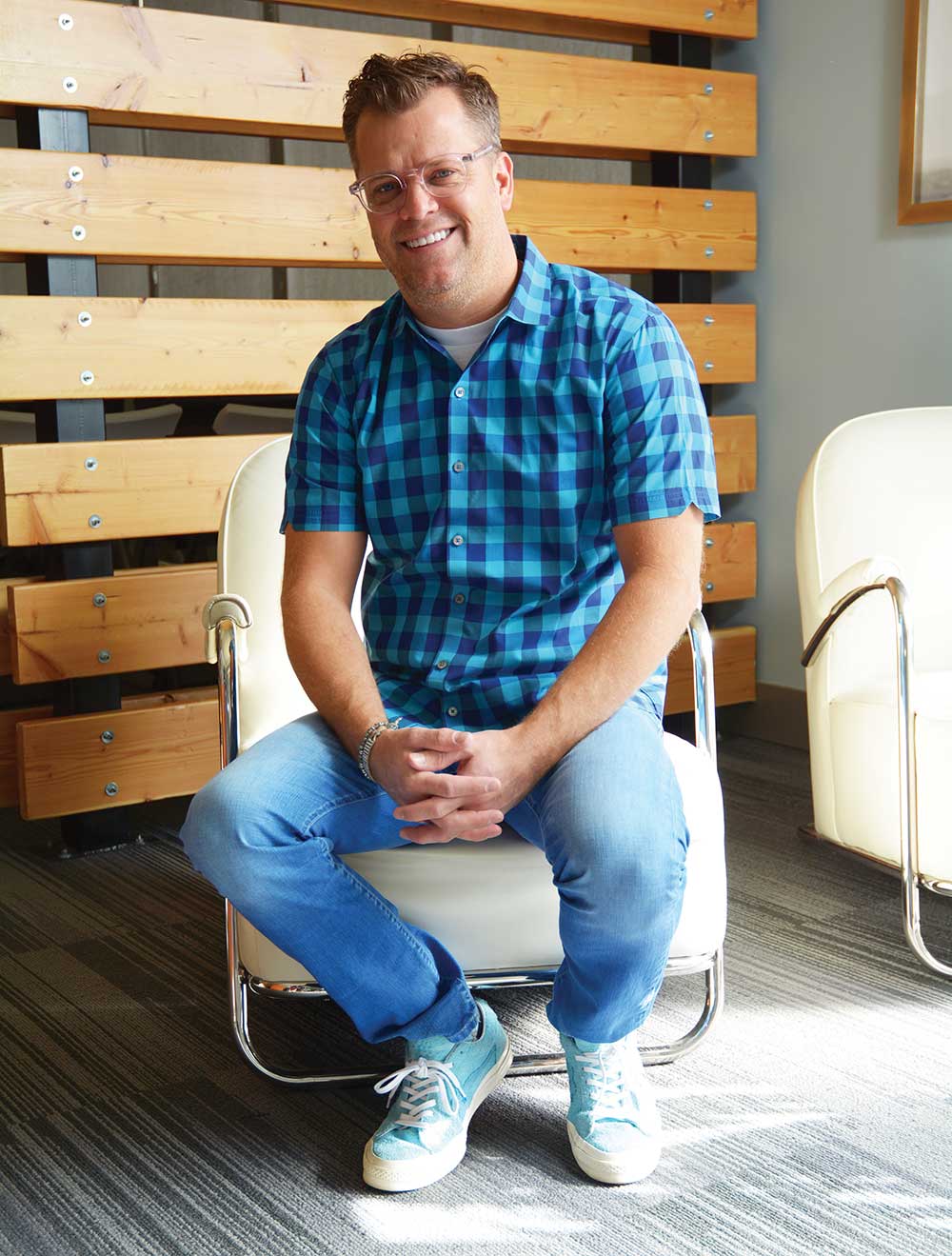 James It’s an absolute race to get to profitability or to scale so you can compete long term. This is at odds with personal health and personal relationships. My mom would get mad at me, “I called you and you didn’t freaking call me back for four days!” But I love it when you’ve figured out the plan and the ball slows down and you know you’re going to hit it out of the park. You’re not inventing anything new. It’s rinse and repeat — as fast as we can. This stage also feels like a knife fight with the competition. It’s about execution and rallying the troops.

Smith This stage is the most fun. Every single day in the shower, I brainstorm what I’m going to do, who I’m going to hire, and I know we’re going to crank on new sales. It’s easier to recruit because there’s a lot of appeal during growth stages. What I don’t love is that you make a lot of mistakes. When you grow fast, you blow through a lot of money chasing every avenue and opportunity. It’s chaotic. But in chaos, there’s an opportunity to create something new and better.

James Politics play a part in every single company. If you don’t like it, don’t work at a company with more than 10 people. When you bring in great people to come in and execute, they are going to have some ego. You’re going to have to debate and fight. If you go behind someone’s back, you’re going to pay. And the best people make you pay! It’s reality, but I don’t like that part of being an economic engine. What I do love is playing on the world’s stage. I don’t want to play Triple A.

Smith At this stage, your biggest competitor is yourself as you are trying to outdo the prior year and previous years to that. There are more eyes on you — more haters and doubters. At this point, you’ve built a legacy business and if you screw up, it affects so many lives. When you become an economic engine, you have to have a purpose greater than the money. The money is anticlimactic. Two days after you deposit the money, you realize there has to be a bigger purpose. That can be about the people or making change in the industry, economy or community.

James I went to RC Willey and bought a La-Z-Boy. That was when I was living down by the river — or actually the train tracks in south Provo. My daughter would get scared by the trains, so we would run to the back window and wave at them to make it less scary. During her sleep, she would raise her arm to wave at trains, and it made me feel like a loser father. I had to step up my game and get away from the river/train tracks. Another big splurge? Right before we went public with Omniture, a bunch of us bought Porsches. I also bought a TransAm, which helped me make friends with EVERYBODY. People I wouldn’t normally interact with loved me. But the seat was too high so I had to sell it.

Smith  My theory is you splurge along the way with 20 percent of your earnings and you save the rest. My biggest splurge was buying three racecars within a month. Now that is a grotesque way of wasting money — to buy race cars and then race them! 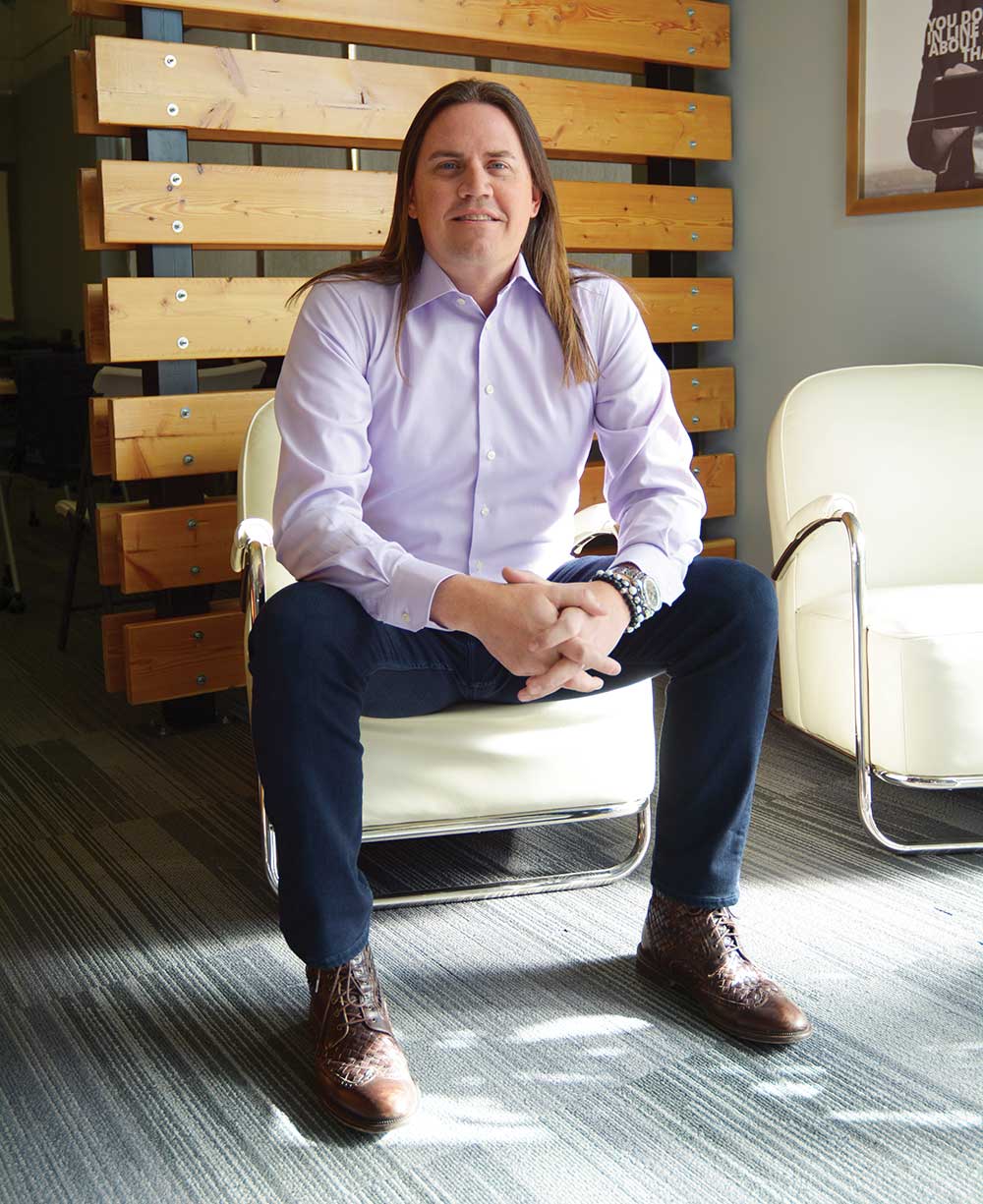 Four Foods Group has a lot on its plate. This eight-time UV50 winner began in 2008. In 10 years of operation, Four Foods Group has become the management, development, investment, finance and operations company for five restaurant brands with more than 150 locations collectively. (Photo by Dave Blackhurst/UVBizQ)

James Ugh. But that’s not just Monday. That’s every morning.

Smith Mondays are tough. It’s a new week of expectations with my people, with the market. It’s a day of planning.

James I want all the employees to get out. This is not our life. When it’s time to hit, we gotta hit it. But I don’t want to see people in the office past 5 on a Friday. Knowing it’s important to have fun makes it sustainable for everybody.

Smith On Fridays we buckle up because we have a lot of business coming in the doors. When I was in tech, I would go home on Friday night and be with the family. But in the food and beverage industry, Saturday nights are our Friday nights.

James There’s a church song with the word “zeal” in it, and that’s the word I use to describe how I go to work and bring my A-game every single day. From the outside looking in, people might not understand what I’m doing,  but it’s 100 percent focused on winning. I grew up watching “Leave It To Beaver” where dad comes home, reads the newspaper and the family pays respect to father for what he’s done. But the truth is, you need a 15-minute commute from work to decompress and then it’s time to put your A-game back on for when you walk back into the house. Having that as my gameplan is one of the big things I think about these days.

Smith Shauna and I started this company together 10 years ago. I was still CEO of my last tech company and she was running our first restaurant for six months. She’s brilliant and we recently named her the president of Four Foods Group. We have 58 percent women in our senior leadership positions and throughout our 5,000 employees. Working with a spouse can be difficult if you don’t set the ground rules up front. We collaborate but let each other make decisions. And then you finish by making out.

James My mind is a chaotic mess! There are big themes and processors devoted to certain components. For one, I look for anything and everything to provide motivation. I remember all the slights. I went through a phrase of not really caring what people thought, but I have a list of three to four people who are going to get reminders as we have successes. Those doubters and haters can suck it. I love proving people wrong.

Smith Every day I wake up and I’m managing my thoughts. I meditate on my thoughts and then act on them. Every room in my mind has a different set of emotions. An entrepreneur runs from room to room in his or her mind. It’s your job to figure out which ones are the most important, and you can’t say them all. I’ve gotten better at fine-tuning my mind, but it’s still a hot freaking mess.

James You’re a force of nature. Most local magazines just fail, but you’ve made it work and it’s awesome to watch.

Smith The most bitchin’ editorial magazine on planet earth. Excellent content and a great balance of everything.