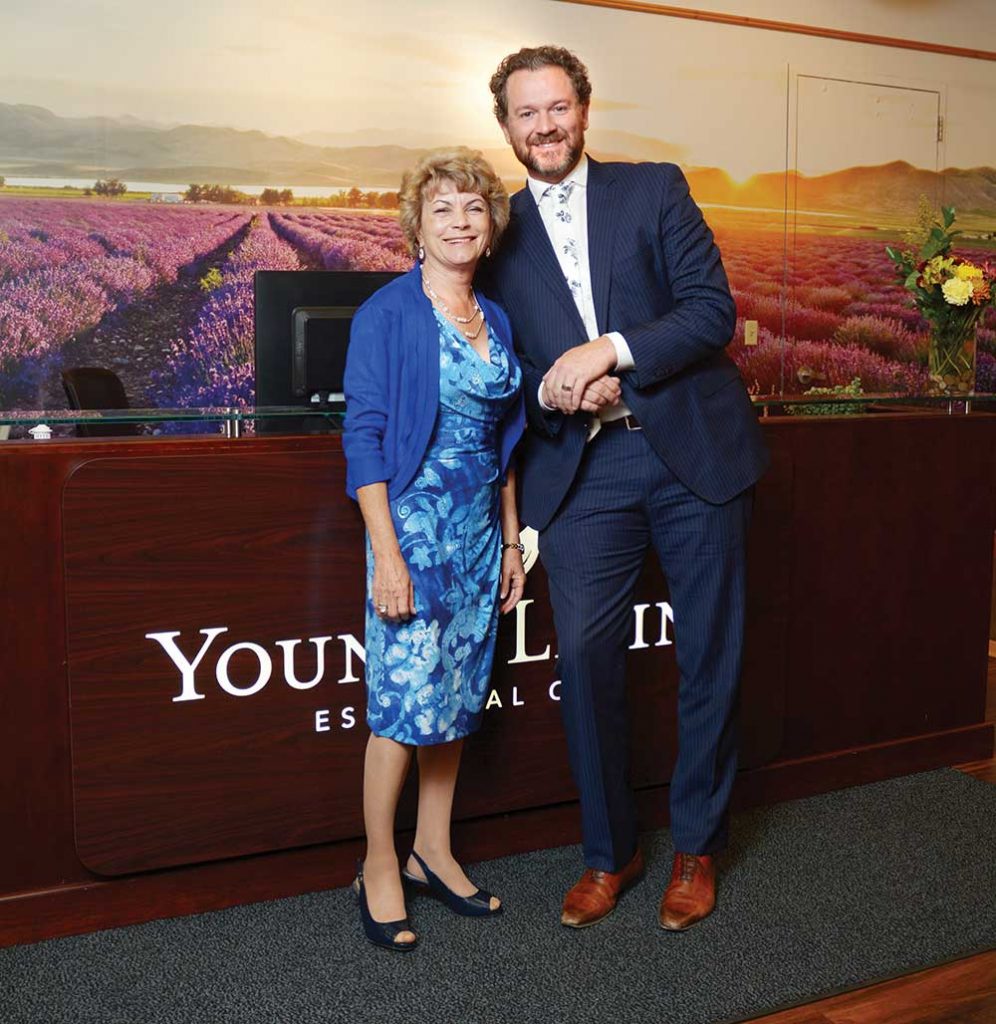 LIVING LEGACY
Young Living is the largest woman-owned and operated company in Utah with Mary Young as the CEO. She took that post in 2015 while her husband, Gary, was still alive. “I knew I could do the work but never wanted to take anything away from him as the true leader,” she says. President Jared Turner was mentored for nearly six years by Gary, and now the duo are marching into the company’s 25th anniversary year with their own BHAG (which means Big Hairy Audacious Goal, but also sounds like a decent name for their next oil.) (Photo by Dave Blackhurst/UVBizQ)

Young Living President Jared Turner was 16 when the company opened in 1993 with Gary and Mary Young’s vision to distill oils from the earth and share them across the globe. With Gary’s passing earlier this year, this Lehi company is now co-led by Mary and Jared, who first joined the Young Living family as a lawyer. The two leaders differ in age, oil preferences and height — he offered to lift her in the photo to even things out. But they both easily laugh and cry when recalling Gary’s leadership style and phrases like, “It’s never eaten as hot as it’s cooked.” Maybe not. But there’s plenty a-cookin’ in this $2-billion company and quarter-century leader in essential oils that will move into their new Lehi headquarters (designed by Gary) early in 2019.

After doing two months of legal work for Young Living as an attorney at Kirton McConkie, founder Gary Young asked me to come on board full time. I was about to finish the six-year partnership track, and everyone told me it was risky to work with a “farmer guy” who owned a network marketing company in Utah County. But I was hooked and made the leap. It was 2012 and we were a $180-million company with 2,500 distributors at our convention that year. Six years later, we’re going to hit $2 billion for 2018 and we’re planning on 50,000 at our next convention at Rice-Eccles.

But back to my mentor Gary. He had been building out his vision despite huge opposition, a disabling injury, ridicule and betrayal. Gary is the seed that sprouted the modern-day essential oil movement. My training was unconventional. We flew up to St. Maries, Idaho, where we have a lavender farm. He made me walk backwards all day to make sure the swather and truck were parallel. It felt like I walked 50 miles. I wasn’t going to ask for water and food unless he did. Later I realized this guy can go without water and food for days. I fell asleep on top of freshly cut melissa (variety of lavender) with a pitchfork in my hand. We got back to the house and Gary told me to grab my notebook. We sat on the picnic table in the moonlight, and Gary told me how he wanted to grow internationally. I listed six pages of single-spaced action items by the light of my cell phone. I’ve since accomplished everything on those six pages.

Gary and I began doing tours and presentations around the world. I would give my spiel about how we are stewards of the earth and how Young Living empowers us, and then I would quickly get off the stage because people were there to hear Gary. He could talk for six hours. He was an amazing storyteller and connector. He had the curiosity of a child, and he never lost his sense of “wow” for the earth. Gary’s hobbies were my hobbies. I did everything he did — except joust. I never did get into that.

Gary operated in 30th gear. He asked if I could run in 20th gear. I gave it my all and I aligned with his vision. He put me on projects because he knew I would get it done relentlessly and with compassion and love — even though sometimes I have pushed too hard.

Although Gary passed away earlier this year, his legacy lives on. I wrote a book called “On The Road With Gary” where I share all the lessons I was lucky enough to learn from him about business and life. With his wife Mary as the CEO and me as the president, we are constantly quoting Gary and doing things he would be proud of. I call Mary the queen. I’m very protective of her and their two boys.

We are focused on impacting the world, and it starts with our team. When I came on board, Mary was the only woman in an executive position. Our board room was full of Caucasian conservative men. We immediately started diversifying. We needed women in power who could inform us on how to take care of women in the field. To this day, Young Living is the largest woman-owned and operated business in the state of Utah. Empowering women is a huge part of our success strategy.

We started a profit-sharing program this year that benefits every employee — not just C-level execs but lineworkers and call center employees. Some of them will see a larger sum of money than they’ve ever been paid at one time. It takes our entire team to work toward our plan to get oils into every home — not just rich American homes, but shacks, shanty towns and everywhere on earth. Not bad for our first 25 years.

Young Living is putting the candles on its 25th birthday cake with five totally lit goals. They plan to increase by five times the number of people impacted by their foundation. They are giving themselves a five-year deadline to become a zero-waste company. They are going to build at least five corporate or partner farms each year for five years. They have sights set on opening five or more new markets each year. And they want to reach 5 million additional households in the next five years. #LIVINGmybestlife

UV50 Startups to Watch: No. 4 Kortni Jeane Next post