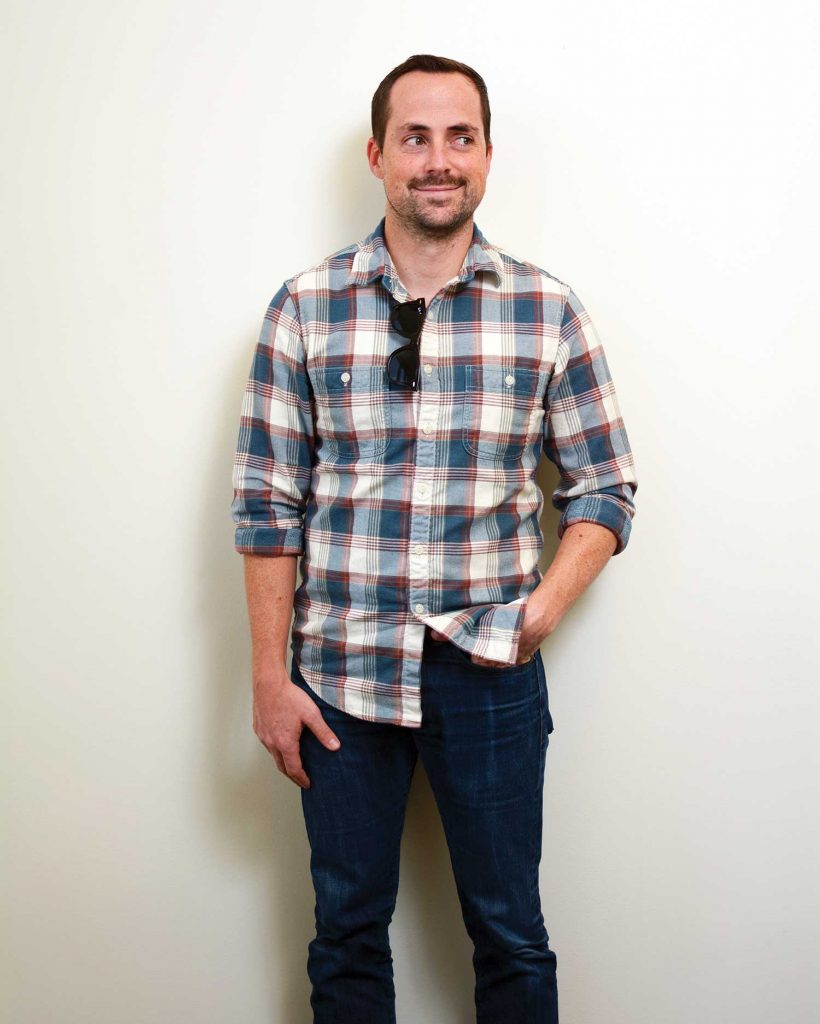 WALL-TO-WALL WORK: At his core, Blake Murray is a problem solver. “I’ve never met a wall I can’t plow through. And I actually don’t believe there are walls that can’t be plowed through,” he says. “Most problems can be solved with smart, hardworking people. When we have a problem, we don’t complain about it. We solve it.” That attitude undoubtedly trickles down through the team. “Pool tables aren’t culture to us. Giving our employees autonomy to work on meaningful problems? That’s culture.” (Photo by Dave Blackhurst/UVBizQ)

Walking through Divvy headquarters was akin to a game of musical chairs. Desks lined the walls, conference rooms, and open spaces — with multiple people to one desk and no seats to spare. The 114-person company was moving to a bigger office the following week, but the growth and energy will no doubt keep them hustling for chairs. “Divvy belongs in every single business,” says Blake Murray, founder of the expense and business budgeting app. “We’re thinking big — and we’re elevating to that level.” As a startup, it’s raised $57 million in outside funding (with venture capitalists begging to give more) and its sales have continually outpaced the product. “The opportunity is there, and we’re taking it,” Murray says. Divvy and conquer.

My son was 8. He was reaching an age where he could start pulling his weight, so he received his first round of legit chores — and not just “make your bed” crap. Real chores. When he finished, he turned to me and said, “Where’s my money?”

I looked at him and said, “Goodness, you are right.” But I didn’t have any cash. I never have cash. When was the last time I paid with cash?

It was an interesting problem to me. Were there apps for this situation? Venmo, sure. But I’m not going to get Venmo for my 8-year-old kid.

Ultimately, this got me thinking about the digital payment environment in general. How exactly do we facilitate our transactions? How do companies do it? How do they keep track of who spends what?

I went to the market, and the solutions were garbage. Usually you can find someone attempting some kind of solution. Not the case here.

There were expense apps, but they completely lacked in feature functionality and didn’t pro-actively solve any problems. The left side of my brain was going crazy.

The concept is this: Automate the entire expense report process, and help companies eliminate fraud and wasteful spending.

This was bigger than a hair-brained startup idea. Within a week, I was investing my money into it. It was that clear how big the opportunity was.

I’ve passed on so many startup ideas that didn’t feel big enough. They just didn’t interest me. I’m not denigrating startups that aren’t huge swings. We need people making smaller products and businesses, and not every company can have a billion-dollar market share. But this one can.

[pullquote]“Not every company can have a billion-dollar market share. But this one can.” — Blake Murray, founder of Divvy in Lehi[/pullquote]

From an Etsy shop all the way up to a massive enterprise, every company has to adhere to the same rules and tenants of expense management. We can build a technology platform for doctors, lawyers, teachers — and we can offer it to them for free. We can disrupt the largest market in B2B because it literally applies to everybody. I realized that, and I thought, “Oh, crap.”

Our business has constantly outpaced our product. It’s rare. In a normal startup, you have an idea, create a product, get it to the customer, and then learn, learn, learn. But we had contracts and agreements in place way before we had a live product. It’s given us huge advantages.

Most hyper-growth companies with a free product will raise millions of dollars and “solve the revenue problem later.” That is not in our DNA. We figured out how to build a free platform, create healthy revenue on that free platform, and always focus on the value to customers.

“Why would I not sign up for this?” That question and mentality is how we’ve built this business. CFOs are looking at the product and saying, “Hell yeah. Sign me up.”

We came into 2018 with no intent to raise capital. Capital with the right partner is fantastic, but it comes with literal costs, like equity. We launched the product in January, and we instantly had a groundswell of support. Within two weeks, I was getting anywhere from 10 to 15 inquiries a week from venture capitalists. Holy cow.

I told them thanks, but no thanks. We didn’t need the money. And while we weren’t playing hard to get, it certainly had that effect. People gravitate toward big ideas. We aren’t solving “kinda problems.” We’re solving real ones.

We eventually found the perfect partner who helped us make a much friendlier deal on our terms. We closed that round in May. Two weeks later, people were already offering a Series B round of funding.

With every dollar of funding we take, we can turn it into $2, $3, $4, $5. With our KPIs and metrics, we know we can replicate them. These aren’t guesses. It’s knowledge. We’ll accelerate the vision, but we’ll do it on our terms. We’ll mature it properly. Before we bring on 10,000 customers a month, I want to make sure it’s the same great experience from the first customer to the 10,000th customer.

It’s weird to say this out loud, but our projections are insane. It’s fiction land stuff. In a year or two people will be connecting the dots. We’re replicating 60 percent growth month over month — and we’re not even close to stopping. Every single week is our best week yet. That is fun.

Still, we’re our own worst critics. We’re careful not to drink the Kool-Aid. Every day is a hard day with me, because I know we can constantly improve. I’m never satisfied. Our team is hungry. We’re setting out to do something that hasn’t been done before, and it makes the work exciting and purposeful. But most of all, I want the team to enjoy the hell out of the ride.

Divvy is free to the consumer. How, you ask? Every time you spend $$ using Divvy, that merchant pays a fee (called interchange) to Mastercard and the issuing bank. Divvy then shares this fee with them. “It’s a win-win-win-win situation,” Blake Murray says. “We provide our bank partners with hundreds of new customers, and there’s no extra fees for any of the four parties involved (Divvy, the bank, the credit card company, and the consumer). It’s an incredible strategy and just a pure and simple good deal.”