Home Uncategorized Christmas Vacation Up on the Rooftop

Christmas Vacation Up on the Rooftop 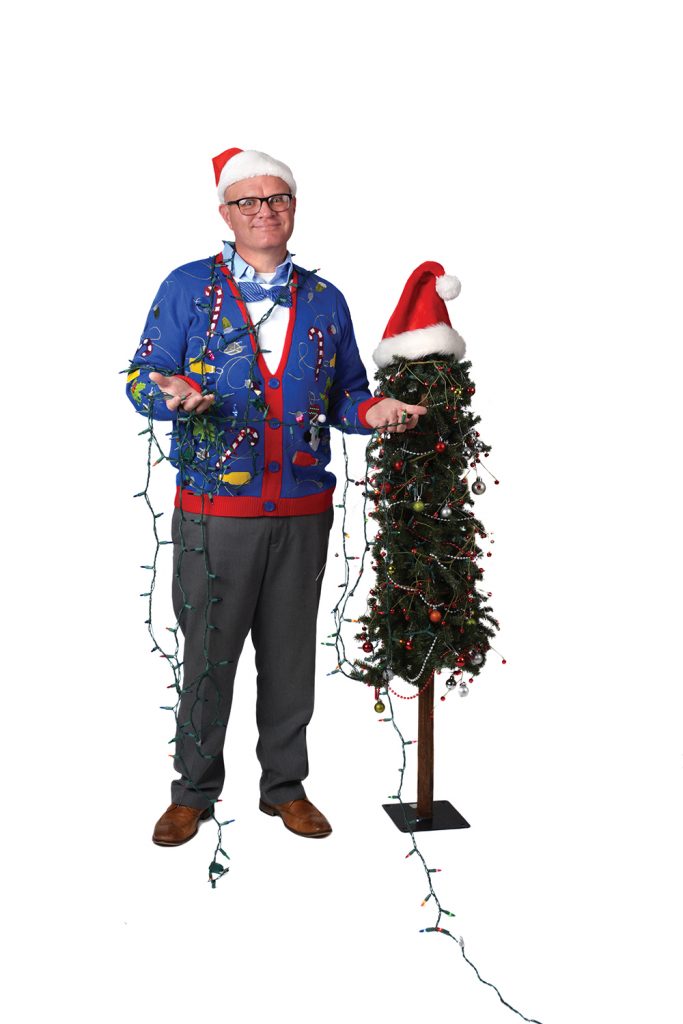 Every Christmas, my expectation is that the Christmas lights look good. I want every light perfectly straight. I wouldn’t say that I’m too cheap to pay somebody — it’s that I want to do it myself to make sure it gets done the way I want it done. That Christmas was no different.

At the time, the house I was living in faced north, so we always had ice on the front of the roof. I had an outlet under the eaves where we plugged in the Christmas lights, which was connected to a switch inside the house. One night, I went to turn on the lights, and they wouldn’t turn on. For me, it’s unacceptable that the lights don’t go on. It was an emergency to get those lights fixed.

I went up the stairs and out the window. I climbed up the south side of the house in shorts, a T-shirt and snow clogs with no hat, no coat and no gloves.

When I got to the north side, it was still pretty icy from the recent snowfall, and I slid down the roof.

Luckily the place where the two eaves met caught me and I was stopped. Then I was right where the outlet was under the eaves. I cleaned the ice out and fixed it. When I plugged it back in, the lights came back on.

The “exciting” part was that I couldn’t climb back up because it was so icy. I didn’t have a cell phone. I didn’t take a walkie talkie. I didn’t tell anyone in the house that I was going out to fix the lights. I was stranded.

For a good 15 minutes, I pounded on the roof, thinking someone will come to the door. No one was coming. I thought someone will think, “Where’s Dad? I haven’t seen him for a while,” and come looking for me. Then I was thinking, “Why isn’t anyone coming looking for me?” Then I thought, “I left the window open on the south side of the house, so now I’m heating the outside.” Then I was thinking about how much my gas bill and electricity bill was going to go up.

I tried to scale up the side of the roof line, but I kept sliding down. So then I started yelling. There were no neighbors to be found. I yelled for my wife and she didn’t come.

I actually started getting really cold. I was thinking, “I’m going to get hypothermia out here.” There were no cars driving by. It was 8:30 or 9 at night, and there wasn’t much traffic.

As I got colder, I thought, “If I get to a certain point, I’m going to have to jump.” So then I was looking down, calculating if I could jump and make it and not break anything. I was out there for 45 minutes.

Finally my neighbor pulled up. I yelled, “Hey!” He saw me and said, “Baldwin, what are you doing up there?”

He came over and knocked on the door to get my wife. Then my neighbor brought the ladder over, and I safely descended the roof with no broken bones. From then on, my wife, my children and all my neighbors called me Griswold.

Corby Baldwin, a Pleasant Grove resident and father of five, found himself in similar snow boots to the character of Clark Griswold from “Christmas Vacation” twice in the same holiday season. For the first twinning episode, Corby was hanging his Christmas lights, using a 20-foot ladder to place a light at the 25-foot peak of his roof when the shifting of his weight caused the ladder to lean away from the house and slide down, bringing Corby screaming like a child 25 feet to the ground. Sound like a scene from the film?

Corby’s second episode — getting stuck on his roof in an attempt to fix his Christmas lights — echoes to Clark Griswold getting trapped in a cold attic for hours. Corby waited for 45 minutes for someone to drive by and rescue him, wishing it wasn’t such a silent night.

Dreaming of a White (and Family) Christmas Next post