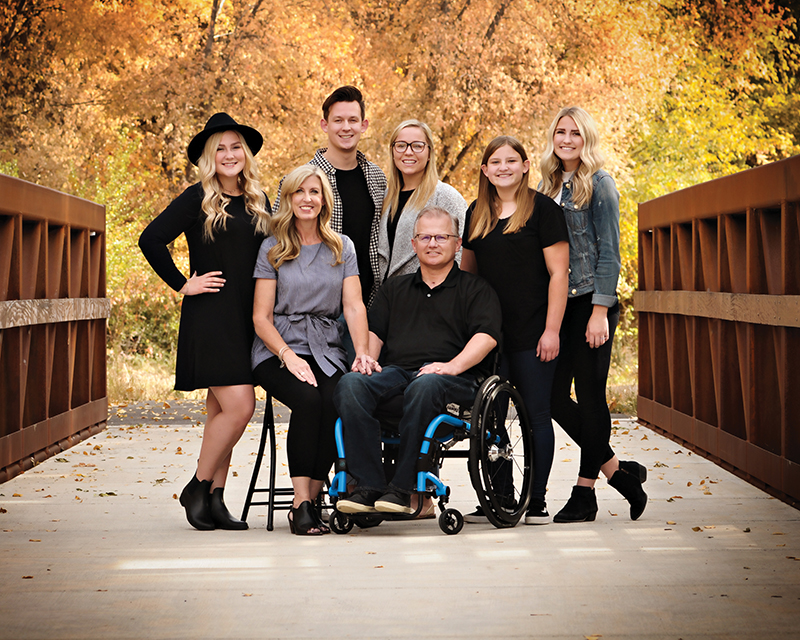 On Aug. 30, 2017, Springville’s Cory Nilsson came home from his work as a quality assurance engineer at

InsideSales.com in Provo and decided to go for a bike ride up the right fork of Hobble Creek Canyon. It was a route he’d taken dozens — maybe hundreds — of times since he and his family moved just a few miles from the mouth of the canyon.

“The weather was great and I thought I could get a ride in before my wife got home from work,” Cory says.

He rode to the top of the canyon, turned around and started the easier downhill part of the ride. He was gathering speed when a microburst wind snapped the trunk of an old pine tree, sending the top third of the tree toward the road.

Cory happened to be riding directly in the path of the flying trunk, and it struck his left side.

He immediately found himself on the road, falling in and out of consciousness, with no one seemingly around for miles.

Cory and Kristin met when her co-worker mentioned his high school classmate.

“I’m assertive,” Kirstin says. “He said he knew this really cool guy from high school and I said, ‘Great. Set us up right now.’”

Not long after, the couple married.

Cory became an avid cyclist. He would routinely measure his weekly mileage in triple digits.

Cory was prescribed blood thinners and Kirstin started gathering information for a medical emergency bracelet — which wasn’t ordered before the accident.

Still, life was relatively normal. The Nilssons had a son on a church mission in Ghana and three daughters who kept them busy with school activities, hobbies and lessons. Cory worked in software. Kirstin has been a nurse for nearly 30 years, with most of that time in labor and delivery.

“We were both working and watching the kids grow up,” Cory says. “We had the normal challenges that come with day-to-day life, but things were generally good.”

Now back to the single moment that changed everything.

Cory was suffering in silence on the side of the road. Vince and Krista Adams were driving up the canyon to enjoy the outdoors near their home when they came across Cory. Vince held him while Krista — a registered nurse with Intermountain Healthcare — drove as fast as possible to Hobble Creek Golf Course, where she could get cell phone reception. She called 9-1-1 and then returned to Cory’s side.

In the meantime, Kirstin arrived home to find the weather had turned. Rain poured down in a late summer thunderstorm that hit squarely over south Utah County.

“I asked my daughter Hannah where her dad was,” Kirstin says. “She said he went for a ride up the canyon but that she was worried because he should have been home by now. I got worried, too. We got in the car and started driving toward the canyon.”

She called Cory’s phone, and it was answered by a sheriff’s deputy. Immediately, she went into “nurse mode.”

“I made sure they knew he was on blood thinners and asked him to let the ambulance and hospital know so they could be ready for excessive bleeding,” Kirstin says.

She headed to Utah Valley Hospital as quickly as possible. A social worker met with Kirstin and explained that the staff was doing all they could to help Cory.

“It was surreal,” Kirstin says. “I’ve been in severe situations, but it’s almost an out-of-body experience when it is happening to you.”

She called family. She eventually got in contact with her son in Ghana. She was starting to face the fact there was a real chance Cory wouldn’t make it — and if he did, life wouldn’t be the same.

Dr. Richard Rasmussen and Dr. John Mitchell performed surgery on Cory for seven hours and couldn’t completely stop the internal bleeding. The family gathered at the bedside and sang a favorite hymn, “Families Can Be Together Forever.”

“I never asked ‘Why?’ through this entire process,” Kirstin says. “It wasn’t my question to ask. I had no control over whether he lived or died. I wasn’t praying for his survival — or even hoping for it. I knew he and his Heavenly Father and Jesus Christ knew best. I told the kids that Cory would need to choose to fight and live. I genuinely believed he would have a say in this. I also told the kids that no matter what, we would be OK.”

But many things weren’t OK. The damage was extensive and daunting. Cory lost his gallbladder. Part of his bowel died due to blood loss. His kidneys were failing. Brain damage was likely.

Family began traveling to Cory’s bedside to say goodbye. The evening after the accident, son Noah arrived at his father’s bedside three weeks before he was scheduled to finish his mission in Africa.

But Cory didn’t die that day. Or the day after.

In fact, six days later, he was stable enough to have an MRI and check his condition from head to toe.

“They said the nature of his brain damage would most likely leave him blind,” Kirstin says.

They also found that, while there was no break in the neck, the loss of blood caused irreparable harm to his spinal cord from the chest down.

“I had a prompting early that he would be paralyzed,” Kirstin says. “I knew it before we knew it medically. I was prepared for that. But the failing kidneys and blindness? That was tough.”

As Cory fought his way through recovery, his vision didn’t improve. Regardless, Kirstin would put his glasses on him every morning with the hope that someday he would need them. Then during general conference of The Church of Jesus Christ of Latter-day Saints about a month after the accident, Kirstin walked into Cory’s room to see him raising his right hand in support of Thomas S. Monson as the prophet and president of the Church.

However, later that night, Cory had another significant scare, when he began to bleed internally again. While he was unconscious and medical professionals worked to save him, Cory saw in his mind’s eye a digital clock counting down.

“I remember feeling like it was a timer, and I had to decide if I was going to go or stay before it hit zero,” he says. “As it got close, I decided to stay. It stopped at one second.”

From that moment on, Cory’s fight — accompanied and strengthened by the courage of friends, family and neighbors — led him to where he is today.

After a year of being in half a dozen facilities, utilizing feeding tubes, dialysis and rehabilitations, Cory is back home.

It takes almost two hours for Cory to get showered, dressed, shaved and teeth brushed. Kirstin helps him get in and out of the car. The house has been retrofitted with an elevator lift in the garage, new flooring, new garage doors, new car and new bathroom — thanks in large part to friends, family and the community of Springville — all of which make Cory’s transition easier.

Last month, the Nilssons celebrated their son’s wedding, and Cory took part in all of the festivities. The bucket list doesn’t end there.

“I’ve put in a grant for a hand bike,” Cory says. “I want to start cycling again.”

The family also took a drive up Hobble Creek Canyon to the spot where the accident occurred. They brought home a piece of the old pine tree, which is now hanging in the family’s garage.

Right next to Cory’s dented bike.

My name is Kelly. I have been following Cory’s journey through his Courage for Cory page with great interest.

I remember August 30th of last year very well. I was the charge nurse at Utah Valley ER that night. I remember every detail from the radio call from EMS I received, to you arriving while your husband was receiving CPR and he responded to your voice. I especially will never forget the blessing he received in the midst of all the intensity in the trauma bay, which has been one of the most powerful blessings I ever witnessed in the ER.

I wanted to reach out to you to say congratulations on this long-waited day of Cory finally able to come home. I can’t imagine the trials and hardships that he and all of you have gone through and I know there will still be challenges yet to come. To me when I see “Courage for Cory” I like to think of it more appropriately: Courage from Cory.

He has been a true inspiration and I am grateful that our Heavenly Father has heard the prayers of many on his behalf. Please send my best wishes to Cory, I think about him often and keep praying for him. I have to admit, my skills as an ER nurse had never been challenged more than that night and I am grateful to see him with his family. I have since moved onto a new job now and take care of disabled people at a long-term facility.

May God continue to bless you all and please know though we are not neighbors we are still friends and here to support Cory as well as your family.

Jumping in Together: Husband and wife grow from ‘Taco Yard Sale’ to two locations of Pepe’s Grill Next post