Home Uncategorized Jumping in Together: Husband and wife grow from ‘Taco Yard Sale’ to two locations of Pepe’s Grill

Jumping in Together: Husband and wife grow from ‘Taco Yard Sale’ to two locations of Pepe’s Grill 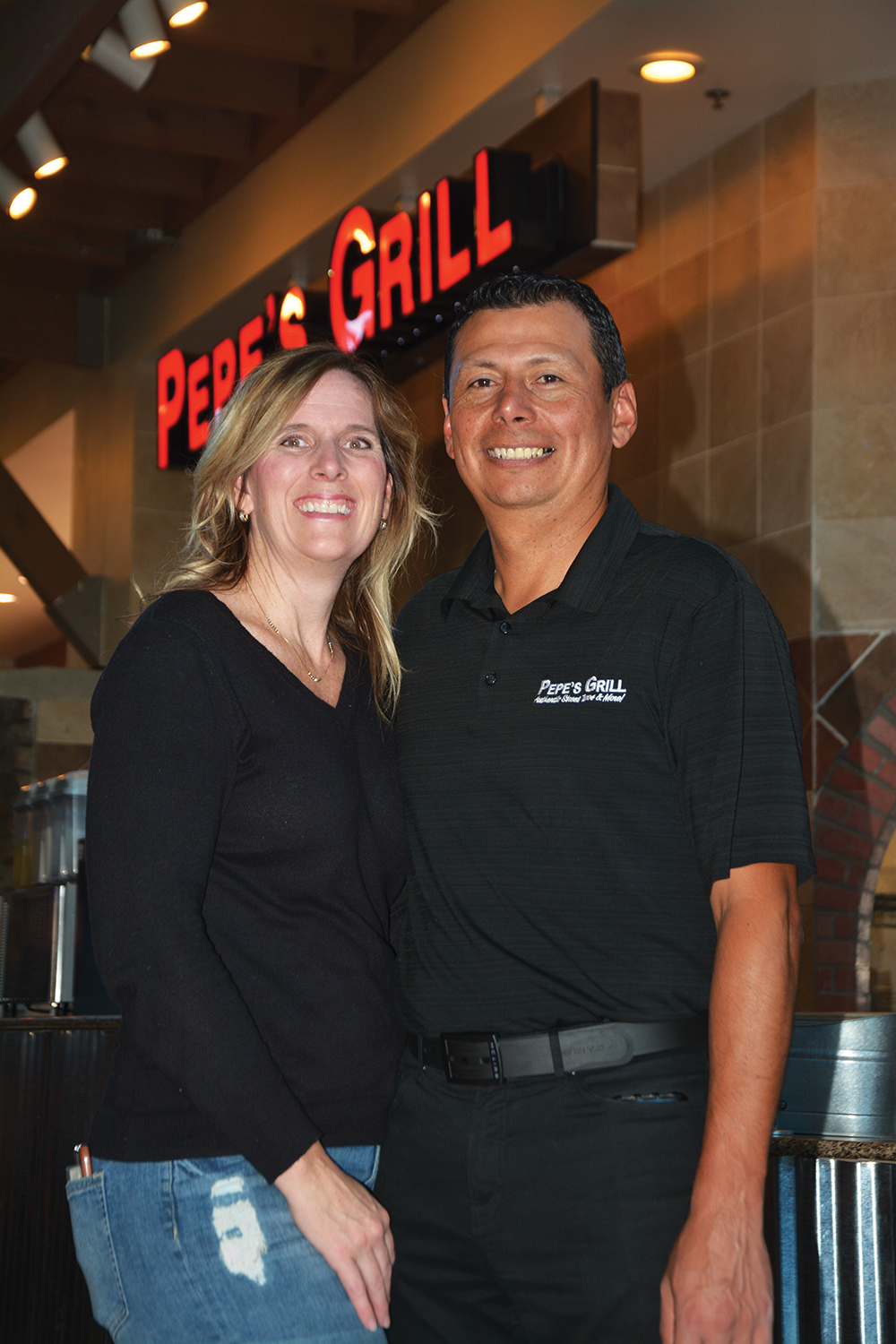 On Dec. 20, 2016, Pepe and LeAnn Valle took a breath and hoped people would come. It the was the soft opening of their entrepreneurial venture — Pepe’s Grill — and they were nervous.

“We’d been told that the hardest part of opening a restaurant is getting people to come in the door for the first time,” LeAnn says. “We were nervous we wouldn’t have many people come in. That turned out to be the one problem we didn’t have.”

Four hours after opening its doors, Pepe’s Grill ran out of food.

“We thought we had enough food for a few days,” LeAnn says.

Pepe and LeAnn met in June 1997 playing volleyball at the Raintree Apartments in Provo. Pepe had moved to the United States from Mexico after his church mission to study English and attend college. He used his then-limited English to challenge LeAnn and a friend to a volleyball game against him and his friend.

The two began dating, mainly communicating in a mix of Spanish and Portuguese (LeAnn served a mission in Brazil) and quickly fell in love.

Pepe passed the Test of English as a Foreign Language (TOEFL) after about a year and began his college studies, eventually graduating with a degree in information technology.

“I love working with computers, but quickly learned that sitting in an office by myself wasn’t for me,” he says. “I lacked passion for the work. I needed to do something else — something that involved people.”

He qualified for his real estate license and utilized a strong market to buy a large home above the Provo Temple.

Then 2008 hit and the market crashed.

“We moved from our big house in Provo to a small rental house in Spanish Fork,” Pepe says.

However, the rental house was on Main Street and LeAnn and the couple’s five children quickly began taking advantage of the location.

“We would have a ‘yard sale’ of tacos every Saturday,” LeAnn says.

The Valles used the money to pay for lessons, teams and other extracurricular activities for the family. If things went well, they planned to have enough taco money to take a family vacation.

In 2011, Pepe’s Grill made its Fiesta Days debut when the family applied for a spot in City Park. The results were tasty. People responded well to the family’s take on traditional Mexican street tacos blended with an American feel.

“We loved that it gave our kids the chance to work and earn some of their own money,” LeAnn says. “They appreciated the vacation more because they’d worked hard for it.”

“People would ask us where we were located,” Pepe says. “We would tell them we were only open at Fiesta Days once a year for a week.”

In the meantime, Pepe was giving his best sales pitch to LeAnn.

“I have an entrepreneurial spirit,” Pepe says. “It was tough to present ideas to LeAnn because she likes job security. It took us about 18 years of marriage to find something we could do together.”

In 2016, things began to line up for Pepe’s Grill to become a reality. An ideal location became available on North Main Street in Spanish Fork. They felt that it was now or never.

“We talked to the kids about it,” LeAnn says. “We wanted them on board. We all decided together to do it.”

From the soft opening, Pepe’s Grill has been a success and is quickly become a “must try” for visitors to Spanish Fork. While the street tacos remain the heart of the restaurant, the menu is always expanding and the nachos are making a push for most-popular item.

“Life is still hectic,” Pepe says. “All of the kids play sports. Working at the restaurant and managing everything is tough, but I think we’re liking it. It hasn’t provided more freedom yet. Slowly but surely, we have found where we each fit and what we do best for the restaurant.”

While they share responsibility for all aspects of the business, LeAnn has a special gift for operations and procedures. She works with staff members to create recipe consistency and attention to service. In addition to lending his name to the sign in the front, Pepe oversees finances and specializes in shaking hands and building relationships.

“The kids joke that Pepe knows everyone,” LeAnn says. “His relationships with people is one reason people gave us a chance when we first opened. Now, hopefully the food and service will keep them coming.”

“I am from Mexico and I wanted to serve food from Mexico,” Pepe says. “I want to say the recipes are from my mom, but that’s a lie. The recipes are a mix from my home growing up and from LeAnn. The menu is designed to appeal to our audience.”

The Valles’ relationship has blended while working together, too.

“There’s no doubt that working with your spouse can be difficult, but it can work,” LeAnn says.

The Valles find open communication is key. Also, their children taught them that there needs to be time for the family at home without discussions of tortillas and fajita chicken.

“We leave restaurant planning and discussions for the morning after the kids go to school,” LeAnn says. “Obviously, things come up, but we find our family needs time away from the business.”

Having all branches of the family tree involved has brought the family closer together and along for the ride.

“This is a family adventure,” Pepe says. “We’re closer to each other. Our relationships are stronger. Everyone knows where everyone stands.”

Pepe’s Grill opened a second location in the food court at University Place in Orem, and the Valles are excited about where the adventure goes from here.

“I’ve served as a bishop twice and have seen lots of people who need jobs,” Pepe says. “I see people from Mexico come here and need something. We want to help others while they help us.”

LeAnn and Pepe would love to add locations while maintaining quality food, service and value.

“Everyone has a story — things that weigh them down — and sometimes people just need a taco to help them that day,” LeAnn says. “We’re happy to give them a good meal with a smile.”

Community-Connected Healing: Heather Yancey turns to friends and neighbors after the loss of her husband Next post