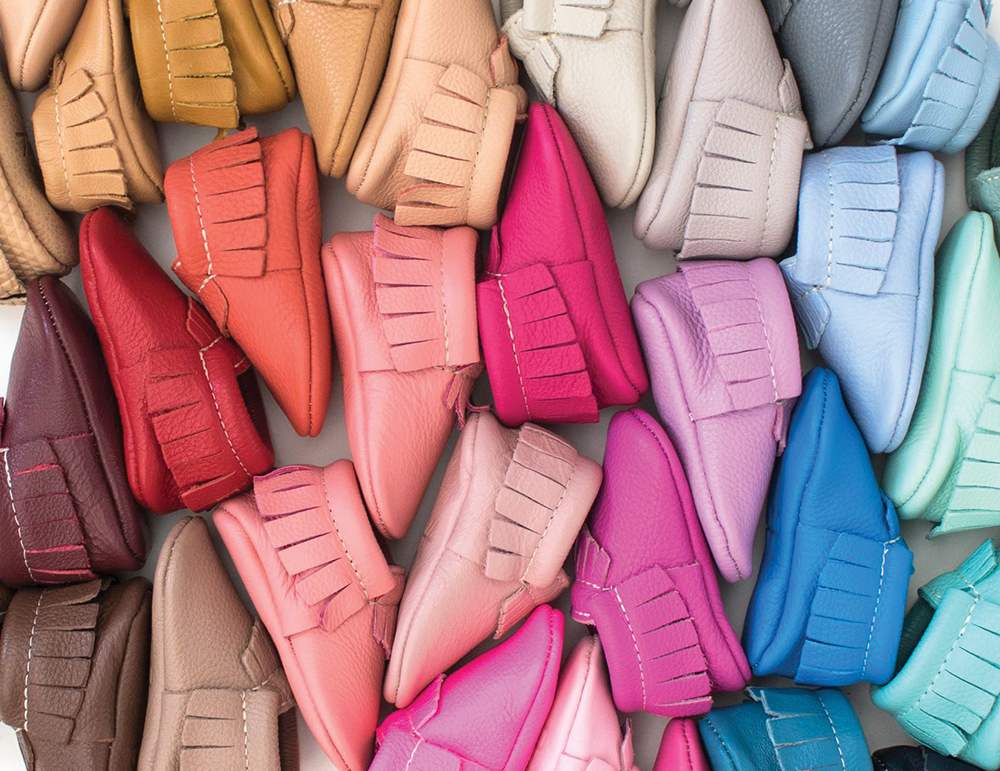 Utah Valley’s business scene is known for many a transcendent person, place and thing. So BusinessQ’s editors decided to name the top 25 icons of our community — including eight faces who have moved mountains, industries and stereotypes in their impressive pursuits.

Iconic Product: Freshly Picked Baby Moccasins
It’s been 10 years since Susan Petersen introduced her genuine leather baby moccs to the world. And those baby steps have made giant leaps for mom-kind. The beloved brand catapulted in popularity when it appeared on Shark Tank in 2013, has expanded its product line to include diaper bags and totes, and has grown to a whopping 850k-plus followers on Instagram. Celebrities also have a soft spot for these soft-soled shoes: Chrissy Teigen, Jessica Alba and the Kardashian sisters have all had their kids donning that fabulous fringe on the pages of US Weekly and People. But perhaps even more iconic? Freshly Picked helped pave the way for a retail renaissance in our valley of locally-designed products that have gone on to become national darlings. And, we might add, particularly with female entrepreneurs. If the iconic shoe fits …

Iconic Drink: Dirty Diet Coke
Would you like a straw with that? We’ve become the fancy soda capital of the world with companies like Swig, Sodalicious, The Soda Shop, and more pouring their liquid gold into the hearts, minds, and souls of Utah Valley-ites alike. But seriously. Have you seen those drive-thru lines? Move over, Green Jello. Flavored sodas be poppin’!

Iconic Lunch: J Dawgs
In 2004, Jayson Edwards started his hot dog stand near BYU campus in Provo. Edwards hauled lumber and paint back and forth on a public bus for a year to get the rundown shack up and running — and it quickly became the taste of the takeout town. Fifteen years later, still dressed with its fresh ingredients and a secret special sauce, that simple shack has grown into seven locations along the Wasatch Front, revolutionizing the $4 lunch break of Utah employees everywhere. Oh, and did we mention it turned Edwards into a BusinessQ cover boy along the way? Well, hot dog!

Iconic  Building:  Lehi Roller Mills
Lehi Roller Mills has been Lehi’s Main attraction for an astounding 113 years. The iconic company, founded by George G. Robinson and now run by his grandson, Sherm Robinson, has prioritized quality ingredients, community connections, and family values. Times haven’t always been “Footloose” and fancy free. (Though onlookers still drive up to see the historic halls where Kevin Bacon once shimmied.) Due to financial troubles, Lehi Roller Mills was sold to local entrepreneur Ken Brailsford in 2014, but it was done on one condition: that Robinson still run the mill. Today? The beloved icon is back on the rise. #flourpower

Iconic Tech Product: AncestryDNA Testing Kit
Worldwide influence is in Ancestry’s DNA. More than 10 million spitters have taken the Lehi company’s DNA tests, which Ancestry then connects with its DNA network. That network, by the way, is the largest of its kind in the world (comprised of a hundred million family trees and billions of historical records) and was also the powerhouse behind NBC’s “Who Do You Think You Are?” With billboards glowing in Times Square, Ancestry knows who they are. And now the rest of us know their name — and ours — because of them.

Iconic Billboard: DOMO
Those baby blue billboards dot the Wasatch Front with their declarations of love, playful jokes, and confusing riddles. (Just kidding. We’ve obviously, totally, completely understood every Domo billboard ever.) But in this designation, we of course have to mention the original billboard king: Omniture. Before he went over to the blue side, Josh James’ original iconic company had green and white billboards dazzling our freeways. “We need more Kates,” they said. “We have too many Mikes,” they said. “We have too many Mikes. Actually the Mike please stay,” they said. And sure enough, those name-brand billboards have led to a Utah Valley culture of revved up rectangles.

Iconic Trend: Giving Back
Give said the little Utah Valley. Give, oh, give. The majority of companies in Utah County either have official charitable foundations or systems in place to help employees give back. From giants like Nu Skin’s Force For Good Foundation or Vivint Gives Back, to smaller organizations that simply give employees PTO to do service, Utah Valley companies have made “giving back” a priority and sparked a beautiful, unforgettable trend.

Iconic Destination: Sundance
Art. Nature. Community. Sundance Resort has long been a beacon for locals and tourists alike. Nestled in the mountains and just minutes from Provo, Sundance is an icon for elevated living. The land now known as Sundance was purchased by Robert Redford in 1968. Originally named Timp Haven, it was changed to Sundance Resort in 1969 after Redford’s hit film “Butch Cassidy and the Sundance Kid.”   Today, businesses want to meet here. Skiers want to ski here. Celebrities want to celeb here. Foodies want to dine here. Artists want to create here. Memories want to be made here. And icons want to icon here.

Iconic Corporate Culture : BambooHR
Oh, those Bambooligans. Always showing us how it’s done. BambooHR’s Ben Peterson and Ryan Sanders have become the poster entrepreneurs for great work environments. Their Lindon company has ranked on many national “best company to work for” lists, and they’ve been featured by pubs like Inc. and Forbes to share their whys, hows and wows. (Wows include: family first, schedule flexibility, strong values, birthdays off, and yearly vacation vouchers.) But the attention, while appreciated, seems silly to them. “Great culture is a strategy — it just is,” Peterson told BusinessQ in 2017. “People keep looking at us like we’re these revolutionaries. And we keep looking at them saying, ‘The data has already been proven! Great cultures lead to great results — and it makes you a better person in the process. What in the world are you waiting for?’”

Iconic Industry: Direct Sales
Can we be direct? Network marketing is here to stay. It’s a popular topic around these parts, where downlines are the uptalk. In fact, Utah County has the highest concentration of direct sales companies in the nation, which gives our county a big piece of the $35 billion pie this industry creates in the United States. Not only do we have a plethora of direct sales companies on our turf, we also have one of the originals. Provo-based Nu Skin was founded in 1984 by Blake Roney. Thirty-five years later, it employs 1,600 people (including 75+ scientists) and does more than $2.2 billion in annual sales. What’s old is Nu.

Iconic Sales: Omniture, Vivint + Qualtrics
We’ve talked about the faces behind these iconic sales, but we’d be remiss if we didn’t talk about the iconic sales themselves. In 2009, Omniture sold to Adobe for $1.8 billion, which led to the $7-billion global giant setting up shop in Lehi and bolstering the Point of the Mountain. Adobe will employ 2,500 in Utah when its second building is completed in 2020. In 2012, Vivint was acquired by The Blackstone Group for $2 billion, and the company has flourished with 7,000 local employees and offices in both Provo and Lehi. And in 2018, it was the sale heard round the world: SAP acquired Qualtrics for $8 billion. (!!!!!!!!) Qualtrics was getting ready to go public before the sale was announced this past November. And now it holds the title of the largest transaction in Utah’s tech history. Welcome to the history books, Q.

Iconic Treat: Cookie Delivery
Call us cookie monsters, but Utah Valley loves it some cookies. And we residents especially love them hot and delivered right to our door. #cookiedivas. In the past couple years, Utah Valley’s cookie scene has exploded with companies like Chip, Crumbl, Smart Cookie, Swig and Sodalicious offering a variety of frosted and unfrosted delights. And from wedding receptions to business events to team meetings to birthday parties to just your regular Monday night … if you’ve got an occasion, there’s a cookie for it.

Iconic Marketing Campaign: Blendtec’s “Will it Blend?”
Before “going viral” was just your regular Tuesday, Orem-based Blendtec took online marketing for a spin. The company started its “Will it Blend?” campaign, where founder Tom Dickson (in an iconic white lab coat) showed off his blender’s power by blending up iPads, rakes, trophies and rotisserie chickens. (R.I.P. iPhone 3G.) Blendtec questioned; the world answered. The company’s sales soared, the ad industry lauded them with awards, and as of this year, the “Will It Blend?” series has had nearly 300 million YouTube views.

Iconic Book: The 7 Habits of Highly Effective People
Published nearly 30 years ago, Dr. Stephen R. Covey’s book — “The 7 Habits of Highly Effective People” — has sold more than 25 million copies and become an industry icon for self-help books. Individuals and businesses around the world have honed those seven habits, and Time Magazine called Covey one of the Top 25 Most Influential People and the book one of the Top 25 Most Influential Business Management Books. Fun fact: Former U.S. President Bill Clinton even invited Dr. Covey to Camp David to counsel him on how to implement the principles of the book into his presidency. These pages had presidential power, people! This Provo giant passed away in 2012. But his legacy? Highly, highly effective.

Iconic Word: Coopetition
Ray Noorda joined Novell when it had just 17 employees. The “father of network computing” went on to grow the Provo giant to a billion-dollar global enterprise. During his time at Novell, he coined the phrase “coopetition,” which advocated for alliances among technology competitors that develop common standards to grow the overall market for their products. Bob Metcalfe, the 3Com founder who invented Ethernet, told this to Network World: “During the 1980s, 3Com and Novell were in what Ray Noorda famously called ‘coopetition,’ and it was fierce. I remember 3Com being five times bigger than Novell, and yet Ray had analysts giving Novell 70% market share. Through it all, Ray was kinder, gentler, and, well, smarter than we were.”

Iconic Reputation: Best Place To Live + Work
We’re the “best place to live and work,” says EVERY LIST EVER IN THE WORLD. From Forbes to Inc. to Business Insider to CNBC, national pubs are taking notice year after year of our little neck of the mountains. So how are we going to up our game? Here’s our advice: Just keep on keeping on. Stay collaborative. Stay stalwart. Stay innovative. Stay supportive. Stay kind. Stay quirky. Stay family-focused. Stay fierce. Stay coopetitive (a la Noorda). And above all else … STAY HERE.

Iconic Landmark: Thanksgiving Point
Let’s give thanks for Thanksgiving Point, shall we? Ashton Gardens. The Tulip Festival. Luminaria. Butterfly Biosphere. Museum of Natural Curiosity. Farm Country. Dinosaur Museum. Restaurants. Shops. Movie theaters. Golf course. Business park. Thanksgiving Point — founded by icons Alan and Karen Ashton — has become a community treasure of discovery and learning. Plus, it has become the anchor of Lehi and Silicon Slopes, which is positively booming with businesses and traffic jams. All you need to do is come over the Point of the Mountain from Salt Lake, see the water tower, and you know you’re home.