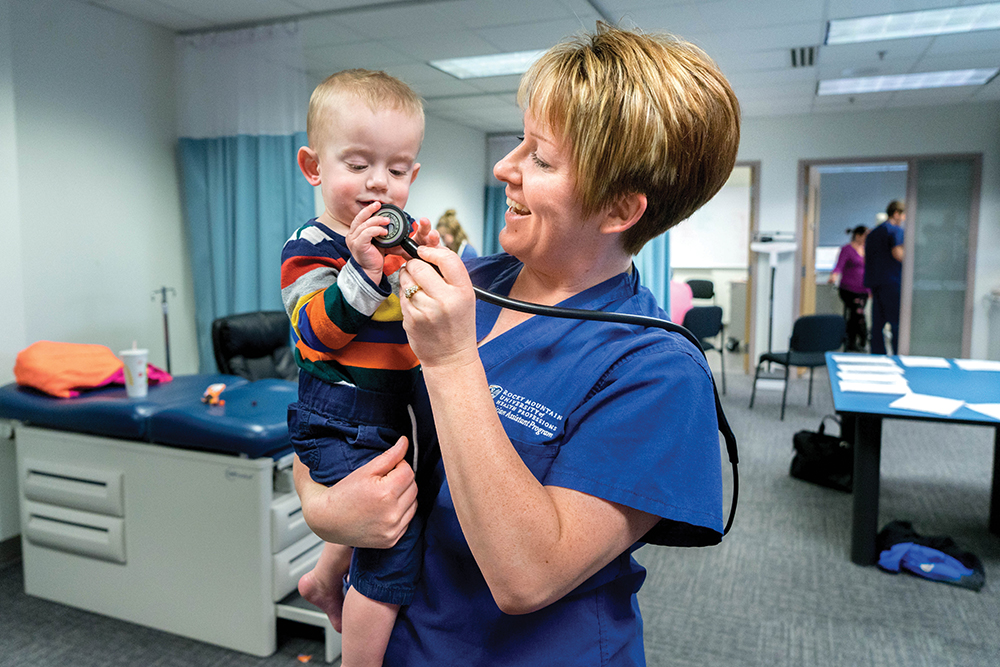 You may recognize his football helmet more than his face. In 2008 and 2009, Coleby Clawson played linebacker for BYU. Now, instead of defending the end zone, Coleby is defending the health of patients who have no coverage nor access to physical therapy.

In the first few months after opening in 2014, the popularity of Community Rehabilitation Clinic in Provo can easily be described by chirping crickets. (Anybody listening? Is this thing on?)

Coleby and his team of volunteers had high expectations for the clinic — they were going to change people’s lives and make a real difference in the community — but the people who would benefit from the services didn’t know the clinic existed.

As the director, Coleby’s job evolved into community awareness. One big ticket to spreading the word came from a presentation he gave to the providers at Mountainlands Family Health Center. Referrals started flowing in. Now about 80 percent of the clinic’s patients come from medical referrals, and the remaining patients are word-of-mouth walk-ins.

The thousands of hours donated by local health professionals and students have built the clinic from the cricket-days to the bustling waiting rooms of today. Since its opening, the clinic has served more than 6,000 non-paying patients.

“For me, it’s the best kind of physical therapy because I’m not billing anybody. I don’t have to deal with insurances and loopholes or documentation,” Coleby says. “We provide the very best care, and there aren’t any outside influences that tell us to do something or not. We just do what the patient needs.”

The high of making a meaningful difference comes weekly for Coleby. For example, a man recently came to the Community Rehabilitation Clinic reporting back problems. After giving him exercises to do, Coleby and his team realized the man’s back problem would eventually require surgery.

“Rather than just discharging him and putting him back to where he started, we held onto him by seeing him every week,” Coleby says.

Working with Community Health Connect (another solution-based local organization), they found a neurosurgeon willing to donate his time and perform the man’s back surgery. Then Coleby and his team worked with the hospital to donate the operating room and hardware for the surgery. The man recovered with the help of post-op physical therapy from the clinic.

“I believe surgeons would do more pro bono work if they knew they had somewhere to send them after surgery,” Coleby says. “I hope the Community Rehabilitation Clinic creates a spirit of collaboration between different professions when they know we’re here as a resource for our shared patients.”

The School Behind the Service

Rocky Mountain University opened the Community Rehabilitation Clinic as a sister facility and as a way to serve the nearly 70,000 people in Utah County living beneath the poverty level — which also means they don’t have access to physical therapy.

“We never want to take business away from physical therapists in the community who are trying to run a business and support their own families,” Coleby says.

This humanitarian vision and focus originates with the origin story of Rocky Mountain University.

In October 1995, Richard Nielsen — president of what is now Rocky Mountain University of Health Professions — had the idea to blend all the curricula he and his business partner Michael Skurja had created to form a doctoral degree program in physical therapy.

The two had met during their combined 50-year career in the U.S. Navy. They had spent some of that time traveling around the country hosting physical therapy workshops. Creating a university would allow them to keep teaching without the miles of travel.

In 1998 they achieved university status and then opened the doors to the first 40 students in 1999.

In the 20 years since its beginning, that enrollment of 40 has grown to nearly 1,000 students. And that one doctoral degree has burst into 21 doctoral programs and four master’s degrees.

Those programs are made possible by a nationally-renowned faculty. Malissa Martin, vice provost of academic affairs post-professional programs, focuses much of her time on helping that faculty best prepare students for a career in healthcare. She has helped create a one-stop-shop digital resource for the faculty development to be launched this year.

“Our goal is to take students where they are and get them where they want to be. Our faculty need to have those teaching skills to make that happen,” Malissa says.

Richard believes another key to keeping faculty members as qualified as possible is to regularly practice healthcare in addition to teaching healthcare. He strongly encourages full-time faculty to spend 20 percent of their work week practicing medicine. The faculty’s salary remains the same, and if they make an extra bit of income during those hours, they get to keep it. Richard encourages them to either practice at a separate clinic, engage in research or volunteer at either the Community Rehabilitation Clinic or the Center of Communication Disorders — an additional pro bono clinic hosted by RMU that treats patients with communication disorders.

To practice his preaching, Richard practices at Rock Creek Neurosurgery in Payson three mornings a week. It’s not uncommon for him to walk into his classroom after a morning of treating patients, pull out his flash drive and show his students a case he saw that morning.

“My hands are dirty – if you will — in the clinic because I’m involved,” Richard says. “It keeps me on top of the literature, technology and industry. That makes me a better faculty member.”

All these puzzle pieces of the university have combined to create what Coleby fondly calls “a family environment.”

Dedicating himself to sports taught Coleby Clawson how to dedicate himself to a career.

“The biggest thing I learned in sports is not to quit when stuff gets hard. Football is tough because you always feel beat up. Practices are hard and games are challenging,” Coleby says. “I learned to be resilient and keep going until results happen.”

Coleby only missed one or two practices during his North Sanpete High School and BYU football careers. And because he understood the importance of moving his body when feeling stiff and sore — the makings of a good physical therapist — he never suffered a serious injury in his football career.

Sadly, he can’t say the same about his churchball career.

Climbing the Next Mountain

The next big landmark for Rocky Mountain University of Health Professions is the proposed medical school of Noorda College of Osteopathic Medicine. In November 2017 the school received a donation of $50 million, and community support continues to grow. This will be a separate but sister entity to the existing university. Eventually RMU will share the campus with Noorda College. The medical school is slated to open its doors in August 2021.

Looking for a New Year’s resolution or motivation to keep going to the gym with your sparkly, new membership? Our 2019 Top Docs (see page 36) each prescribed a lifestyle change for Utah Valley. Read on and become resolute.

“In general, we do pretty well with exercise in Utah County, but not everybody. And everybody needs to exercise. We feel less fatigued. We feel less depression. And we are overall more healthy. Specifically to cancer care, my advice is to undergo screenings. Get mammograms and colonoscopies.”

“Eat whole foods, fruits and vegetables. I know there are a lot of cookie stores around, and I enjoy them, too. But there is so much opportunity to eat the wrong things that we overdo it. What I’m saying over and over again is, ‘Let’s work on your diet. What are things we can change? What’s one small thing we can do?’ I let my patients decide. Maybe they’ll only have a cookie once a week or cut back on soda every other day. They can take one step at a time. Dietary changes are the biggest thing to improve health.”

“Exercise. After I’ve talked with my patients about all their blood tests and medications they’re on that the most important thing they can do is move their body. You can do that at any age, any ability. For some people, moving their body is standing up a few times a day. If you start exercising earlier, it stops the aging process. It helps you age more gracefully.”

“When I get called into the emergency room, it’s usually related to some sort of power tool. Don’t put your hand anywhere near a lawnmower blade. Even if your snowblower is stuck, don’t put your hand down the shoot because the blade can still turn. Don’t take the safety guards off table saws. Be very careful around power tools because in hand-versus-power-tools, power tools always win.”