Standing Firmly in Their Shoes 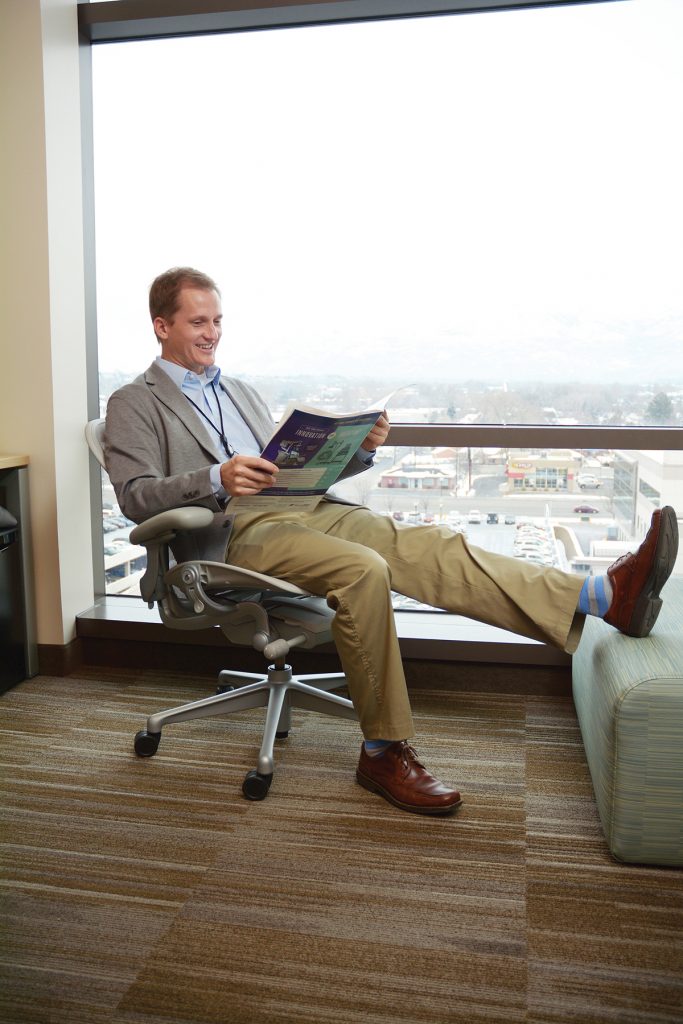 Dr. Matt Swenson didn’t plan on becoming a pediatric psychiatrist. But then he worked with children who had experiences no one would sign up for — a child who had lit his own house on fire and a child who had witnessed the murder of a parent.

Matt attended medical school in Rochester, New York, an area familiar with poverty and crime. For his last core competency study, Matt was placed in the child psychiatry unit of the local hospital and worked with children who had been hospitalized for behavior problems.

One day while walking home from the unit, Matt realized these patients had changed him. If this walk had been like his previous rotations, he would have been hunched over flashcards or replaying every mistake he’d made that day, drilling himself to do better.

Instead, on this day, he looked up.

“I couldn’t stop thinking about these kids, their families and their situations. I was looking up at the sky wondering and reflecting,” he says. “I had this epiphany: Working with mental health patients took me outside of myself in a way that felt healthy. It made me look up. It made me think about other people, their problems and the complexity of their lives. More than anything, I felt a sense of wonder and love when I interacted with different kinds of people I would have never met otherwise.”

Since that life-changing walk, Matt changed his specialty from urology to psychiatry. He completed a residency program at University of California Davis and a fellowship at University of Utah Medical Center. He now practices at Utah Valley Clinic in Provo as a pediatric psychiatrist.

“I get to peel back and see more of why people act and think the way they do, and I get a glimpse into the bigger feelings they hold on to,” he says. “I understand more of what makes people tick, and that leads me to really like them even more.”

Rotations on the child psychiatry floor showed Matt the good that comes from the mental health field, but an earlier personal challenge showed him the heartbreaking effects of when mental health struggles go unrecognized.

During his first year of medical school, Matt received the news that a dear friend — a past mission companion and college roommate — had taken his own life. Living 2,000 miles away from family, Matt needed comfort. He drove to Palmyra, New York, to the closest religious bookstore.

“I was on my own trying to cope with this,” he says. “I wanted spiritual, religious uplift or encouragement. I went in and found two books that had anything to do with mental health.”

He purchased “The Valley of Sorrow: A Layman’s Guide to Understanding Mental Illness for Latter-Day Saints” by Alexander B. Morrison.

“Although it wasn’t obvious to me at the time, in retrospect I recognize that one of the reasons I went into psychiatry is because I had the unfortunately common experience of having a friend die by suicide,” he says.

Anecdotally, it seems that mental illness is more prevalent now than in past years. Some data supports that trend for the teenage demographic in Utah Valley. In 2017, 25 percent of students grades 6th to 12th answered “yes” to the question, “During the past 12 months, did you ever feel so sad or hopeless almost every day for two weeks or more in a row that you stopped doing some usual activities?” To the same depression screening question in previous years, 21.5 percent of students in 2015 and the 17.7 percent of students in 2013 also answered yes.*

Looking at this data alone might indicate that mental illnesses, specifically depression, is on the rise, but Matt advocates considering a wider perspective.

“We could perhaps look at the data and say, ‘It looks like anxiety and depression is increasing.’ I think it’s also fair to wonder if perhaps it’s always been there and people are taking advantage of services or being more honest or open in the way they’re talking about it now more than before,” he says. “The reality is nobody knows the cause or if the increase is real.”

Instead of worrying about statistics and trends, Matt encourages people to focus on providing for the safety, connection and competency of those with mental health challenges.

Regardless if mental health is increasing or if a more aware culture promotes open communication about mental illness, challenges that are invisible from the outside — such as depression and anxiety — are still very real challenges for many people. The way friends and family respond when someone confides in them has potential to either help and heal — or hurt.

In his practice, Matt works with both those with mental health struggles and their caregivers. It’s counterintuitive, but Matt’s first piece of advice to friends and family is to “put away your reflex to fix it.”

Those who struggle with depression have two common thought threads: “I’m broken” and “I’m a burden.” Often when we learn a close family member or friend is struggling, the immediate reaction is, “I’ll fix this.” That conversation can be dangerous because it can reinforce those two negative thoughts. It implies they really are broken and they’ve become a burden for someone else.

“You don’t have to fix people. People can actually fix themselves when they feel seen, understood, and supported,” Matt says.

In that moment, Matt recommends steering the conversation to a series of kind and curious questions. Start with, “I’m so sorry you feel that way. Thanks for telling me. I want to know because I care about you. Can you tell me more?”

The caregiver’s responsibility is not to fix but to understand. Ask what it physically feels like when they get anxious. Ask what keeps them going. Ask how long they’ve felt like this. Ask what they’ve done to help make it better. Matt even suggests asking if they’ve thought about suicide.

“I want people to ask that because that’s a symptom of depression and it can feel very shameful. Your job in that moment is to stand firmly in their shoes,” Matt says.

Genuinely seeking to understand what it’s like to have a mental illness is more effective than searching for the cause and fixing it.

“Most of us are not used to approaching it this way, but we need to keep letting them solve their own problems,” he says. “Our job is to listen, to support, to provide safety and to connect. That’s the stance I want people to take.”

Sitting at the top of the large window in Matt Swenson’s child psychiatrist office is a glass display of his adapted pyramid based on Maslow’s Hierarchy of Needs. The original psychology model came onto the scene in 1943 and still captures human nature, needs and motivation.

Although Matt specializes in pediatric psychiatry, this school of thought — pyramid-style — applies to all ages. When physical needs are not met, such as a full stomach or sufficient sleep, it’s difficult for anyone to focus on being kind or fulfilling a work deadline.

“Many of us think we are self-actualizing, becoming whatever we are supposed to become, at the expense of other needs,” Matt says. “One day we wake up and feel disconnected, unsafe or unhealthy. We realize we’re building a house of cards. It’s not a solid pyramid if there’s only an emphasis on the top layers.”

So don’t get hangry. Start with meeting physical needs as a way to work toward thriving.

Older generations have historically believed new inventions will corrupt the youth — such as jazz in the 1920s and rock and roll in the 1940s. Usually the trends don’t become the feared “worst case scenario.”

Cell phones are the jazz music of this generation.

“I’m not sure it’s helpful to blame one thing or marginalize an entire generation,” Matt says. “I don’t know if anyone knows whether the next generation will be smarter or dumber for having Facebook and Wikipedia at its fingertips.”

Instead of taking a side between living in cyberspace and abandoning tech, he suggests seeing cell phones as a tool.

On one hand, cell phones help fill needs to feel safe, connected and competent. Smartphones let us communicate, creating safety and connection. They can accomplish more tasks, increasing competency. On the other hand, if it facilitates bullying, technology inhibits safety and connection. If the phone is too distracting, it can inhibit competence.

“I’m not telling parents to take away phones or give their kids phones. I encourage them to be reasonable,” he says. “Parents need to figure out what kids need to be successful.”

State of the Art: Lost and Found Next post