Home Featured State of the Art: Lost and Found

State of the Art: Lost and Found 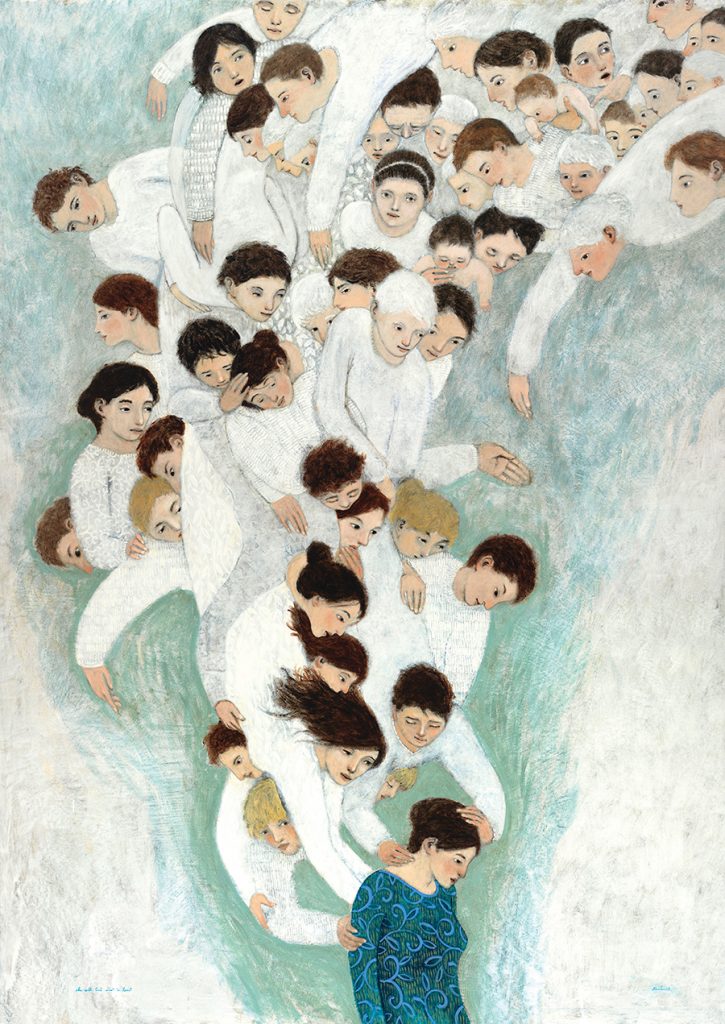 Artist Brian Kershisnik’s ‘She Will Find What Is Lost’ is one of his most loved, most recognized and most revered paintings. It’s currently displayed at the LDS Conference Center, but at one point it was rolled up behind his mother’s couch.

Before moving his family to Provo, Brian Kershisnik lived in the small town of Kanosh, Utah (population 500). When he relocated to Utah County, he kept the studio in Kanosh as a place to paint in peace and quiet —  and many of his works take shape in the central Utah town.

In 2011, after finishing “Descent From The Cross,” Brian wanted another brush with a large-scale painting. He started by exploring his composition idea for “She Will Find What Is Lost” on a small canvas and then brought to life a similar version on the final 8-foot-by-11-foot canvas.

The symbolism behind the popular work has been mused about at length. He is pleased the painting resonates with people, but he doesn’t feel the need to spell out exactly what it “means” to him.

“To be human is to be suffering in some way — chronic or acute,” Brain explains. “It is always nice to hear people tell me how the painting helped, encouraged or validated them.”

While work that evokes an emotional response is rewarding, it’s not what Brian deliberately sets out to do. He believes approaching painting with that desire leads the artist into traps of cliche.

After working on “She Will Find What Is Lost” for six months, Brian considered it finished — or at least the essence captured. Brian subscribes to the sentiment of Mark Twain that explains that works of art are not completed, rather they are abandoned.

“I could have worked on that painting for the rest of my life, but at some point you are just fussing with it and not dealing with the core issue any more,” he says. “I tend to think of paintings as having a will of their own and an agency. Sometimes they have needs separate from my own and the paintings are finished when they are done with me.”

The finished painting was part of an art show in Park City and then hung in a gallery there for close to a year. Passersby enjoyed it, but there were no leads on an acquisition.

“I finally took it down, rolled it up in a tube and put it behind my mom’s couch,” he says.

Soon after, art collector Cris Baird became interested after seeing a print of “She Will Find What Is Lost.” A Deseret Book store clerk told him the original was still available. Cris bought the large canvas but didn’t have room for it in his home. He loaned the painting to the LDS Church for display at the Conference Center where it is admired by masses.

Brian continues to paint with the intent of taking his own life experiences and putting them into a larger mythological circumstance – and his growing fan base continues to delight in the meaningful and magical ways it strikes a chord within.

“Every once in a while, you hit the pitch,” Brian says.

UV To Do: Calendar Of Events For March 2019 Next post