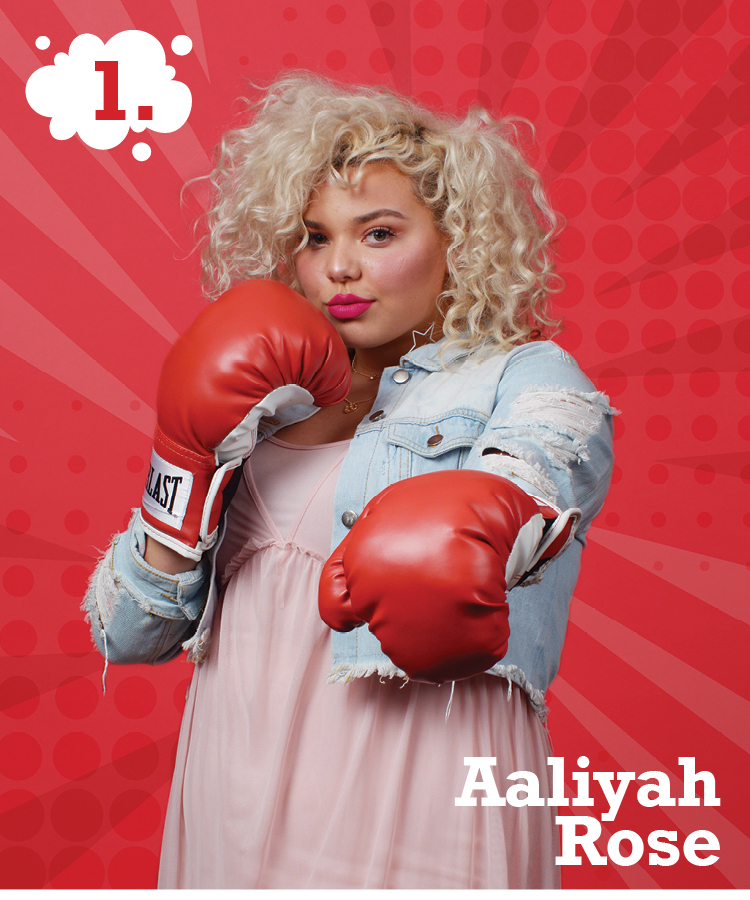 Aaliyah’s soulful, 14-year-old voice singing “Rise Up” turned heads and Gwen Stefani’s chair on “The Voice,” making her the youngest female contestant on the show. Ever. During her weeks belting on the big stage, she also worked with Blake Shelton and Celine Dion and built lifelong connections with other contestants. Most recently, Aaliyah was the featured artist on the 2018 remake of “She-Ra and the Princesses of Power” theme song. Now Aaliyah is writing songs for her first EP and working with non-profits on bully prevention. Bonus fun fact! At age 11, Aaliyah performed at the Radio Disney Music Awards. (Most of us couldn’t even make eye contact at age 11. It’s fine.)

Favorite Superheros “Wonder Woman. She’s a strong, independent woman who can do anything. I also love Tori Kelly because she’s not afraid to be herself and stand up for what’s right. She has the most incredible voice and amazing range. I love her sense of style. I also love my coach Gwen Stefani. She’s very fun and her style is amazing. It matches her personality because she’s so fun and outgoing and bright.”

Save the Day “In middle school, when people were being bullied and nobody said anything, I would stand up for them without being rude. In elementary and middle school, I was bullied for a long time. I would never want to put anybody else through that because it’s the worst — feeling alone and that you’re not good enough. Nobody is ‘not good enough.’”

Desired Super Power “I wish I could teleport so I would have 10 extra minutes and snap and be there.”

Secret Identity “I used to be shy, but I’ve outgrown that. When I get onstage or in a music video, I swear I turn into a different person, like a superhero! I feel like I’m on top of the world. That’s my element, my happy place.”