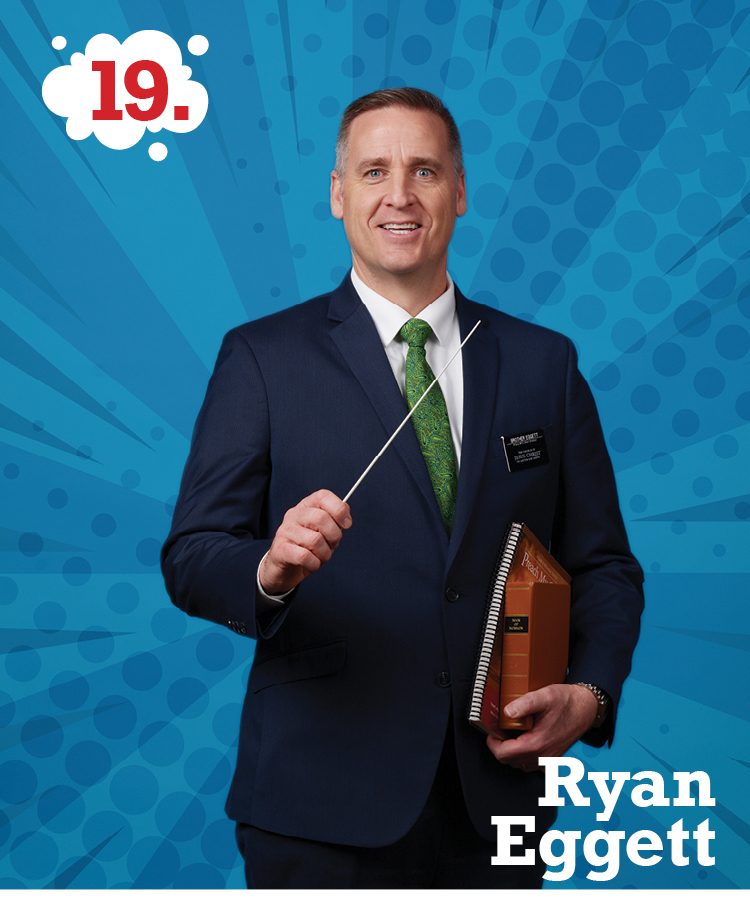 The man behind the baton directs the Provo Missionary Training Center Choir, the Utah Valley Institute Singers, the Lex De Azevedo Millennial Choir and The Utah Valley Children’s Choir. Ryan earned his bachelor’s and master’s from BYU and his doctorate from the U of U. The bottom of the baton he’s holding in this photo is made with layers of wood from the Sacred Grove, Hill Cumorah, and the tree Alvin Smith planted outside the Smith farm in Palmyra — a gift given to him and Tabernacle Choir Director Mack Wilberg.

Favorite Superhero “Captain America’s desire to serve made him a hero before he had superpowers.”

Super Strength “I love people and have an affinity for happiness.”

Kryptonite “When I get nervous I forget critical details. I have forgotten to both stand the choir up and to sit them down during LDS General Conference. Once, I forgot to stand the choir up during a broadcast from the BYU Marriott Center. In a moment of panic, I decided to slowly stand them up during the first verse. It was quite dramatic and very idiotic!”

Heroic “I look up to Eric Henry Liddell, the real-life hero from ‘Chariots of Fire.’ He kept his life prioritized and lived by standards in the face of extreme pressure and adversity. Thomas Monson is also my role model. He spent his life spreading joy by helping others.”

Save the Day “I attended a concert as an audience member where the director was suddenly unable to conduct. An orchestra member knew I was a conductor and asked me to step in. It wasn’t pretty, but we got through it.”

Secret Identity “I’ve always been a hypochondriac. When my doctor asks if I have symptoms, they start to develop. If he asks, ‘Do you have stomach pain?’ I usually respond, ‘I do now!’”