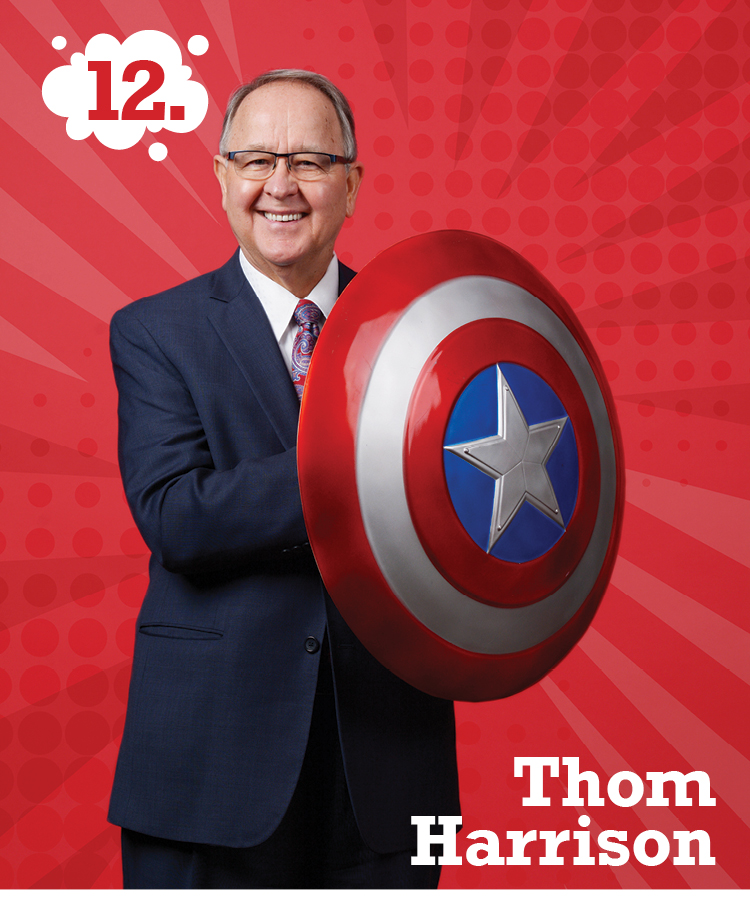 Thom has had the “distinct privilege” of working in mental health since 1972, including starting the first childhood sexual abuse treatment program in Utah in 1976. He planned to spend 20 percent of his time on that topic, but within three months he was treating sexual abuse clients full-time and hired three therapists. This father of six and grandfather of 19 was abused as a child, which has been key in relating to thousands of clients. His career has included providing therapy for survivors rescued through O.U.R., and now he is focusing on EternalCore, which is hosting a faith-centered mental health conference March 29-30 at Little America. Thom has authored three books and co-written/ghost-written others. His topics include treating childhood abuse, co-dependency and human sexuality.

Favorite Superhero “There should be a ‘Heart-Brain Man’ because that’s where superpowers exist. Early in my career I was on the neurotrauma team. When we connect the heart and brain, we engage with deity and the divinity within us. Combining the heart and brain makes us whole and helps us become compassionate. My near-death experience engaged my heart-brain function. I’ve worked hard in the 24 years since then to model a healthy heart-brain connection.”

Heroic “I learned something every time I was in the presence of my mentor Elder Neal A. Maxwell.”

Kryptonite “Superman carries kryptonite, and I carry a piece of the Salt Lake Temple. When one of the granite blocks was destroyed, I got a piece of the edifice.”

Super Strength “I taught human sexuality for 30 years at the U.”

Secret Identity “My first degree was in radio and TV, and I was a DJ. I was in singing groups such as the ‘Peppermint Trolley Company’ and ‘Billy Bunch and the Bananas.’ I’ve played Curly in ‘Oklahoma’ and I was Bob Cratchit for Promise Valley Playhouse.”