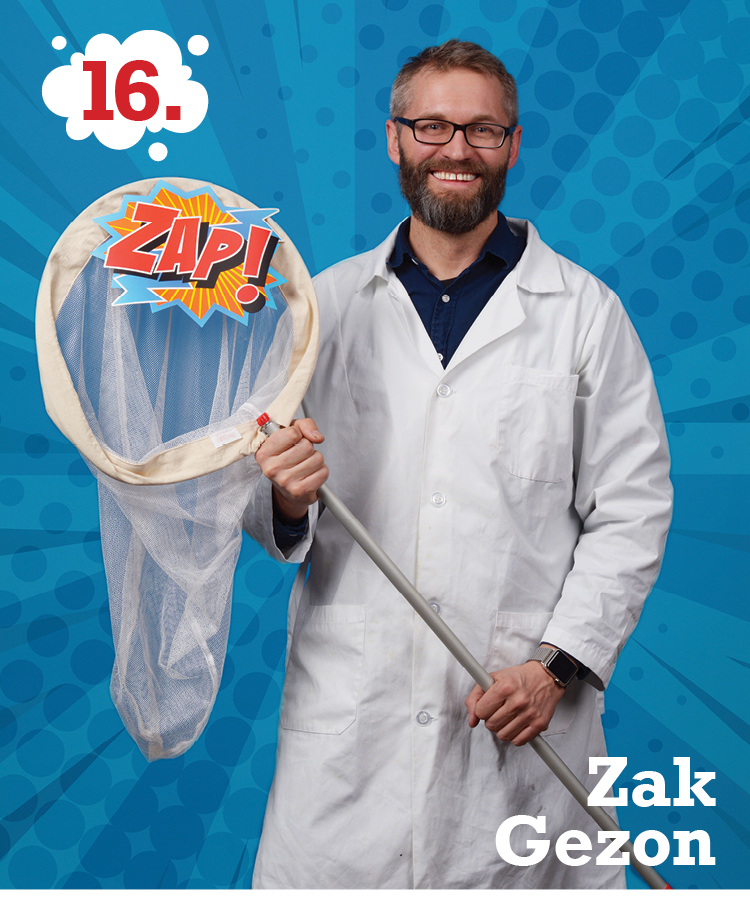 When most people see a four-inch-long cockroach, they shriek and run — but not Zak. His enthusiasm for science led to him studying insects and arthropods for a living and now bringing the new Butterfly Biosphere to life. This Thanksgiving Point chief entomologist shares his passion for creepy crawlers by educating others on why all types of bugs matter, even the ones without the beauty of a butterfly. Zak is also proud of his involvement in many conservation projects, such as a citizen science program in Florida that was created to give children and families the chance to help raise the rare Atala Hairstreak butterfly. You can also see Zak in his trusty labcoat unboxing bugs with off-the-hook enthusiasm on Thanksgiving Point’s YouTube channel.

Favorite Superhero “Ironman. No doubt. He doesn’t have any superpowers, but he is just a creative nerd with a passion. And unlimited resources.”

Super Strength “Critical thinking is a strength I take pride in. I like to make decisions based on data and by consciously trying to address biases.”

Sidekick “My wife, Ramsa, is a fellow bug nerd and scientist. Whenever I see an amazing critter or landscape and she isn’t around, I’m bummed that I can’t share it with her. She takes a very different approach to situations than I do, so she is great to have around in a pinch since we can problem-solve together.”

Desired Super Power “Flight, no doubt about it. I hate commuting. Plus, most insects fly, so I would get to see them like never before.”

Secret Identity “As a father of daughters and also a former Disney cast member, I am a big fan of playing dress-up and belting out Disney tunes. I can rock the ‘Frozen’ soundtrack like it’s nobody’s business.”