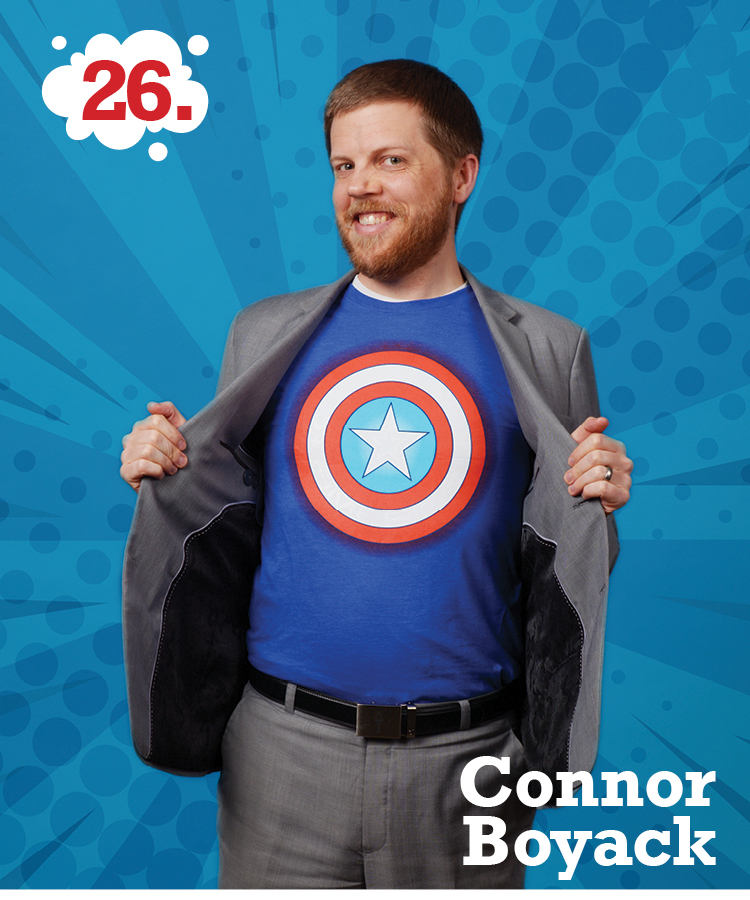 Founder of the Libertas Institute — a non-profit working to create more freedom in Utah — is just one of the items on Connor Boyack’s resume. Connor has also written and sold 350,000 copies of nine children’s books in the Tuttle Twins series that teach children about economics and government. Connor also advocated for passing of Prop 2 this past year and aided in the following negotiations. Even his love story has a political twist. In 2007, his wife started a Facebook page called “Just because I’m Mormon doesn’t mean I’m voting for Mitt Romney.” Connor immediately joined and eventually met and married the creator of the page. “By day I’m a serious think tank executive working on serious issues, but by night I’m a children’s book author working on fun stories that tens of thousands of families across the country really love,” he says. “At least I don’t have to wear a mask.”

Favorite Superhero “I’ve always been a fan of Professor X for his wisdom and leadership, as well as his telepathic abilities to read others’ minds. With how often I interact with people of wildly diverging world views, it would be super interesting to get inside their heads and see why they think the way they do.”

Super Strength “I’m an extremely productive person and prolific writer; I generally accomplish more in a week than many others do in a month. I’m still trying to figure out how to bottle up my energy and sell it to others. It’d be the next big MLM opportunity.”

Heroic “I’m a big fan of moms — the unsung superheroes who are tasked with a variety of roles they have to juggle for which they’re not praised enough. We should all aspire to be as awesome as them.”

Sidekick “I’d love to have Captain Literally from Studio C by my side. Improved grammar and comedic opportunity galore — what’s not to love?”