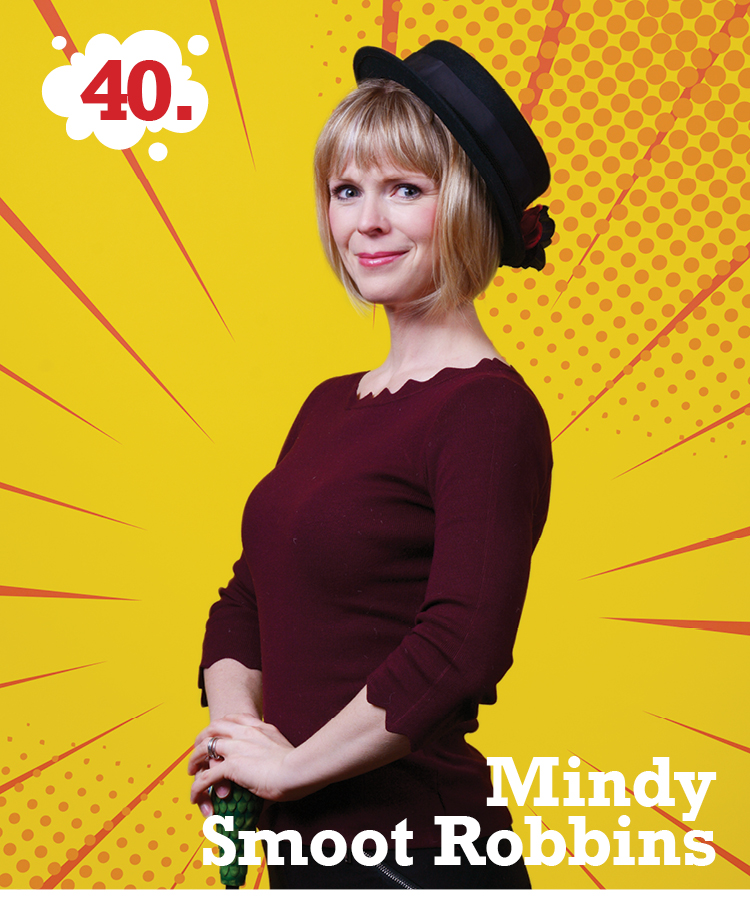 Since age 4, Mindy Smoot Robbins has graced the stage with her stage presence. Her passion for performing led her to take center stage playing Eliza Doolittle in “My Fair Lady,” Annie Oakley in “Annie Get Your Gun,” Miss Honey in “Matilda,” Mary in “Mary Poppins” and Maria and Liesl in “The Sound of Music” — in separate shows of course. Mindy understudied for Sutton Foster in the role of Eponine when touring with the Broadway company of “Les Miserables.” Last year, Mindy released a duet album “O Holy Night” with Broadway vocalist Dallyn Vail Bayles. She shares her knowledge and love for the arts through the Utah Conservatory of Performing Arts, where she is owner and artistic director. Among all the roles she has played, the most important are wife and mother of four.

Save the Day “My first season at the Tuacahn, I was the understudy for Laurie in Oklahoma. On opening preview, the actress for Laurie lost her voice, so they called me to go on. I didn’t have a line memorized and had never had a rehearsal. I hit the stage with the director Derryl Yeager and ‘walked’ the show a few hours before the performance. That night, I kept a script on each side of the stage. When I would come off stage, I would quickly read the lines for the next scene and head back on. It was thrilling. This is a story of my current nightmares at 40 — but at 22, it was awesome!”

Secret Identity “I had a voice teacher who told me my physical structure wasn’t built for belting as I got older. For years, I shied away from difficult material. Dallyn Vail Bayles and I were asked to sing at the Tabernacle on Temple Square for New Year’s Eve. Dallyn suggested I sing Defying Gravity from ‘Wicked.’ I worked on it every day until the concert but even the day of, it still wasn’t quite there. I told the audience about my fear before I sang. And then, I did it! The reason that night is special to me is not because of how I sang but because I sang. I am grateful for struggles and insecurities.”

Dealing with Life Challenges Through Faith, Family, and Community Next post