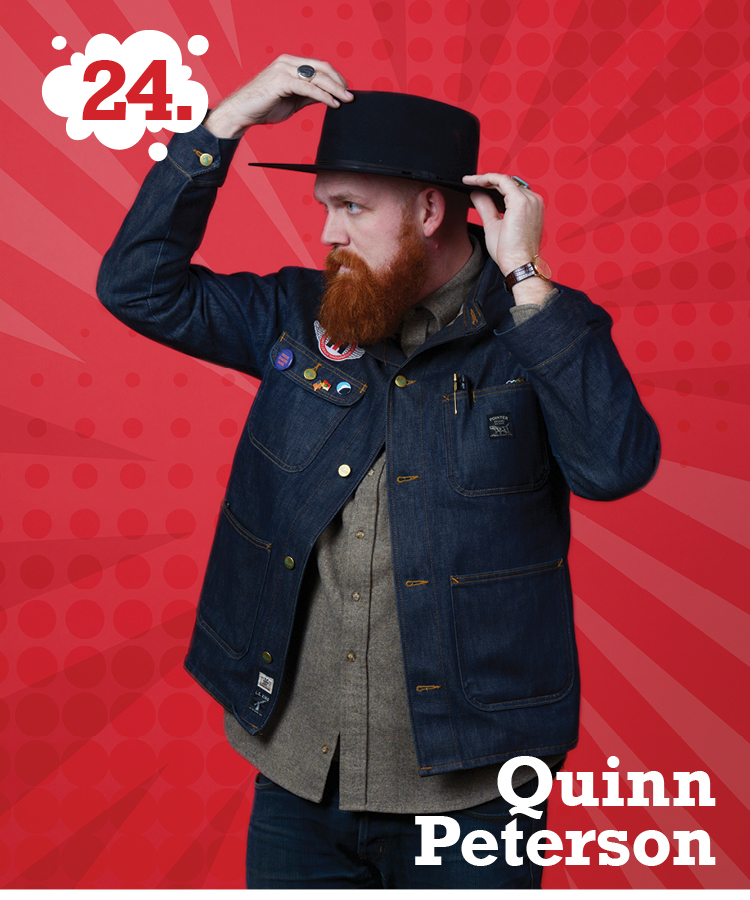 Quinn wears many hats. There’s the executive director of Downtown Provo hat that he wears as his day job, the hat of owner and founder of QP Collections that he wears as a wildly successful side gig, and the I-can-build-anything hat he wears to create an extravagant tree house, a greenhouse to protect his 100+ plants and the various enclosures for his variety of pets. Quinn is the one to thank for the new art programs and downtown vibe at the crossroads of University Avenue and Center Street.

Super Strength “I’m overwhelmingly passionate. I truly care for and about tons of different things. I have the ability to get other people excited, too. Also, there’s a really fine line between getting things done and pissing people off, so that’s a balancing act I’ve been practicing for a long time.”

Kryptonite “I hate eating. It’s just such a nuisance so I eat Taco Bell two times day at least. Preparing food is a pain. Cleaning up is a pain. Eating takes too much time. It’s kryptonite because I eat junk and drink two or three 5-Hour Energies every day.”

Save the Day “We installed string lights over University Avenue for The Moth & The Flame concert. That night I was at a dinner party and got a text from the venue coordinator saying, ‘The light strings on our block just went out.’ I had no idea how to fix it, but I traced the powerline to the hookup for power and used my Boy Scout coin to open the powerbox. I fixed it and went back to dinner with my wife.”

Desired Super Power “To always be rested and eliminate the need for sleep.”

Secret Identity “I am passionate about scouting. Six months out of each year I am training youth to run a summer leadership camp and teaching them how to resolve conflict. Then I’m there for at least seven days in June running the camp.”