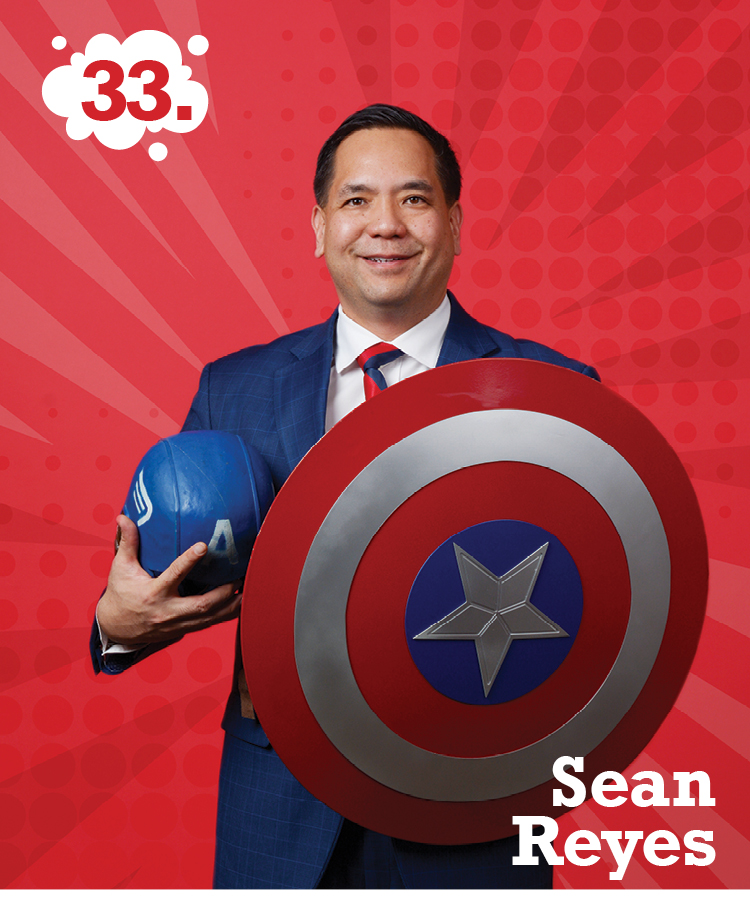 Since 2013, Sean has been Utah’s Attorney General and the face of fighting Utah’s biggest issues including the opioid epidemic and sex trafficking. Eyeballs outside the state have also taken notice, as Sean was selected in 2015 by the Republican National Committee as one of four national rising stars. The son of a Spanish-Filipino immigrant father and a Japanese-Hawaiian mother, Sean is Utah’s first minority elected statewide. His lengthy resume includes being named “Outstanding Young Lawyer of the Year” in 2008 by the American Bar Association (although he humbly says he wasn’t even the best attorney on the 19th floor where he worked). He is a former collegiate athlete and mixed martial arts fighter who speaks at Comic Cons (and brought Cosplay friends to the photo shoot) and raps on Bloomberg News. (Is that even legal, Attorney Sean?)

Super Strength “Working with O.U.R., we pull children out of the bonds of slavery. It breaks my heart anew every time I see the hell in which they are living. But hope renews when I see them liberated and able to reclaim their lives. To witness miracle after miracle is a gift.”

Kryptonite “In 2012, I lost in spectacular fashion to John Swallow. It wasn’t meant to be, but other doors have opened. Every day I have a smile on my face when I drive to the Capitol and think about how I work for the whole state of Utah. But in the beginning of my political career, I got smoked in a very public way.”

Sidekick “With my wife, Saysha, at my side, I can do anything. She says I have vampire abilities to function on two hours of sleep.”

Secret Identity “Because of the diversity of experiences in my life, I can connect in boardrooms and with heads of state, but also with average folks from the wrong side of the tracks.”