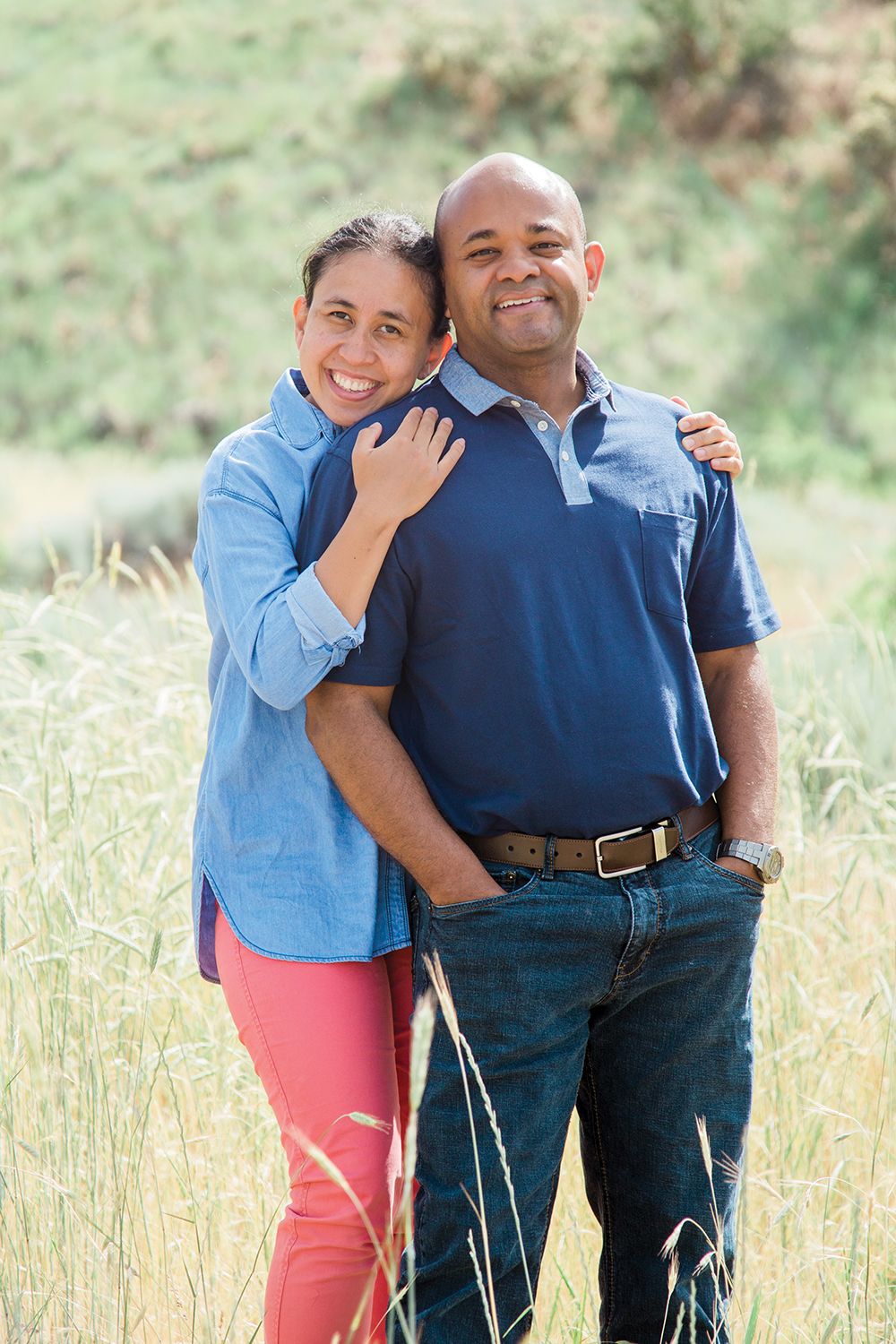 On their first date, Marc Martial asked Paka an important question. “I was already 27, and I didn’t want to waste time. I asked, ‘Do you see this going somewhere?’ And even though we hardly knew each other, she said, ‘Sure.’ We continued dating and got married.” Through infertility and sudden parenthood, this Orem couple has learned how to thrive in every stage of life.

Marc knew marrying Paka was the right choice when he introduced her to his mom.

During the couple’s engagement, Marc had a job interview at the hospital, and his mother and bride-to-be got to know each other while they waited together outside. Marc’s mom had come to visit from Haiti and didn’t speak English. Paka didn’t yet speak Creole. But when he came outside after the interview, he found the pair chatting. One of Marc’s friends had happened to walk by and was interpreting between English and Creole.

“That was a defining moment for me. Before my wife and my mom met, I was nervous that maybe she wouldn’t like my mom. But she loved my mom,” Marc says.

Marc and Paka married in December of 2001 and continued their schooling (Paka in statistics and Marc in nursing). About two years later, they had each finished their graduate work and started trying to get pregnant. Paka conceived during that first month but unfortunately miscarried. This began a years-long journey of infertility, which they describe as the biggest challenge of their marriage.

For about five years, they tried various infertility treatments, none of which were successful.

“My wife would cry all the time,” Marc recalls. “At least once a month she’d be crying, but I’m not someone who cries. But I remember one morning when the in vitro didn’t take, I drove to work and sobbed in the parking lot. I just cried like a baby because it was painful.”

Although the heartache was very real, Paka and Marc filled their pre-parenthood years with goodness. They traveled, did humanitarian work, advanced their careers, saved for retirement, started a rental property management business and bought a house.

“Being involved with good things kept us busy and not dwelling on the infertility too much,” Paka says. “There are a lot of great things we focused on during those years because we didn’t have children.”

They acknowledged their trial but never complained, both determined to choose happiness.

Throughout the years, people would suggest the adoption option, but the Martials weren’t ready. They wanted to have biological children, if possible. In 2009, their hearts opened to adoption. A month and a half after putting in their application, they met with a birth mom. Dahiren was born in September of that year, and they welcomed him into their home.

Finally holding her son in her arms, Paka was struck both with joy and the overwhelming task of instant motherhood. Her  mom couldn’t come from Indonesia to help on such short notice and neither could Marc’s. The night they brought him home, their neighbor — who had several children of her own — came over to teach Paka a few mommy-hacks. As Dahiren got older, their neighbor became a second mom to him, specifically when it came to haircuts.

“I had a lot of friends who helped me figure out how to be a mom,” Paka says. “It was not easy, but it was a moment we had awaited for so long. Whatever happened, it was joy.”

About four months after the learning curve of parenthood began, Marc’s home country of Haiti experienced a devastating 7.0 earthquake. Among the tragic losses was a family friend of Marc’s parents who had two living children: one adult daughter attending BYU-Idaho and one 12-year-old son named Levi. Marc had met the older sister when he helped her get into BYU-Idaho. When Marc and Paka learned Levi was on his own, they contacted his older sister about what she wanted for her brother. She wanted him to live closer to her, so Marc and Paka made that happen.

After ten months of paperwork and tracking down Levi’s birth father for permission, the Martials were finally able to bring Levi to Utah under their legal guardianship. Paka and Marc officially adopted Levi 10 months after that.

In just over a year, the couple went from having no children to having a preteen and a teething baby.

“We were going through puberty and the terrible twos at the same time. It wasn’t much different at moments,” Paka laughs.

Fast forward to the summer of 2016. They had a 6-year-old, an 18-year-old and a positive at-home pregnancy test.

Before getting their hopes up, the couple went to the gynecologist. He confirmed with an ultrasound that Paka was, in fact, pregnant. Back in 2014, Paka had a stroke, which led her doctors to find a tumor on her pituitary gland. They surgically removed it and suggested the tumor might have affected her infertility.

“That’s the only thing we can think of that would make a difference. But even then, it took two years later for me to get pregnant,” Paka says.

Nine months later after that pregnancy test, Paka gave birth to a baby girl they named Dahlia. Now she’s 2 and gleefully shouts, “Daddy!” when Marc comes through the door. Marc tries to coax her to call him, “Papa” — how he addressed his father and how Dahiren and Levi address him — but under the influence of Peppa Pig, the high-pitched “Daddy” persists.

Now Dahiren is 9 years old and Levi is 20 and on an LDS mission in Benin. Paka works part time for Intermountain Healthcare as a data analyst and Marc teaches in the College of Nursing at the University of Utah where he is working toward his Ph.D.

Marc looks at life’s challenges like a GPS. If you miss something, just recalculate and make new plans. Paka and Marc have learned to hope for good things but not wait around for anything.

“When things are not going the way you want them to go, don’t put life on hold. Live life to the fullest, regardless of your situation,” Marc says. “I never knew what was going to happen, but when we look back at our lives, we would not have been able to accomplish what we did; we would not be the people we are today without those trials.”

Kaitlin and Reed Harris Smile Through Life's Surprises Next post