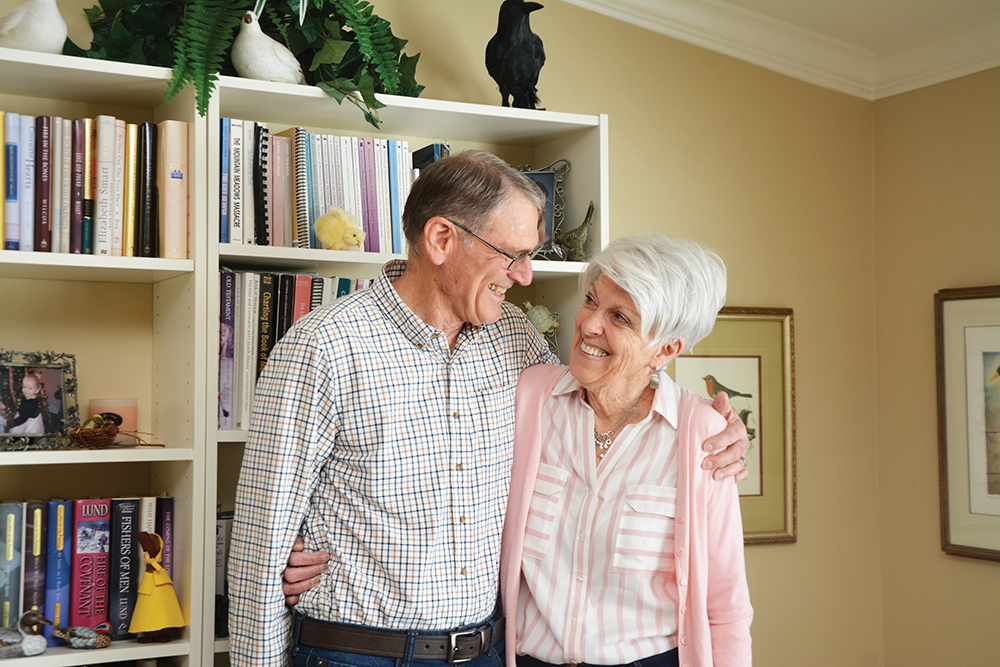 Through working together professionally and serving in church callings side by side, Nick and Karalyn Cronk have learned to live life as partners. “Some couples like to keep separate lives. He goes out hunting with the guys, and she goes out with the girls or her sisters,” Nick says. Not the Cronks. Like two people who have spent 50 years as best friends, Karalyn can finish Nick’s sentences and vice versa. “We’ve been joined at the hip since day one. We worked at the same place. Our hobbies are the same. It’s important for couples to find things they enjoy together,” Karalyn says.

This Los Angeles-bred boy and Provo-raised girl met in L.A. as BYU students working in sunny California for the summer. They started dating when they each moved back to Provo and were married a year later in 1967.

Nick studied psychology at BYU, but learned a year before graduation that job prospects were slim for psychology majors. He quickly took some education classes and became a teacher in special education at the Utah State Hospital in Provo. He taught struggling youth for 30 years before retiring.

Karalyn worked part-time at the Utah State Hospital as well and switched to full time after their kids started all-day school.

When the hospital created a ski program for the students, this Springville couple became certified ski instructors at Sundance and then at Snowbird. For years they took the youth skiing on the weekends, and skiing became one of the main activities on the list of things they enjoyed doing together.

“Our kids got involved with it, too, so that was a good family thing until they got to be teenagers when they’d rather stay home with their friends than go skiing with their parents. Their friend’s didn’t understand that idea,” Karalyn smiles.

Since retirement, Nick has faced two bouts with cancer. He first had prostate cancer, which took the Cronks on a two-year journey to battle and conquer it. Then he was diagnosed with thyroid cancer last year. He had one surgery soon after diagnosis, then in December they removed the lymph nodes in his neck to ensure they’d removed all the cancerous cells.

His doctors are hopeful they’ve removed it all and are keeping an eye on him though regular blood tests. Each time he has found out about cancer, it is right before the season of powdered snow.

“It’s been ruining my ski seasons, which is the worst!” Nick smiles.

Since retiring, that list of things to do together has adjusted and grown. They used to run together, but now they walk three to four miles a day, hand in hand. Some people have recognized them as the couple who walks all around town. And just last summer they started doing Dharma Yoga at The Yoga Shala in Orem, which is run by their daughter and son-in-law. They’ve found that yoga helps keep them limber and strong.

These parents of two and grandparents of 11 have served two missions for The Church of Jesus Christ of Latter-day Saints. They served first in England, where Nick also proselyted as a young man, and a second mission in Salt Lake City on the British Floor of the Family History Library.

They’ve become proficient at finding and cataloguing old British records, which has benefited their own family research because both Nick and Karalyn have ancestors from England. Now they serve as assistant directors at the Family History Center in Springville, helping their ward and stake with online family history tools.

Aside from how they spend their time together, Nick and Karalyn recognize forgiveness as the core of their marital strength.

“He is amazing with his forgiveness and patience with me because I’m not the easiest person to live with. He’s very patient and kind to me and other people. He thinks more about others than he does about himself. He’s absolutely darling, isn’t he?” Karalyn smiles.

“She’s very forgiving. I’ve done lots of things she shouldn’t have forgiven me for, but she has forgiven me and sticks with me and accepts me,” he says.

After 50 years of forgiveness and walking hand-in-hand, they regularly finish each other’s sentences.

In 1976, Nick inherited candy making tools from his grandmother, so he learned how to make chocolates. He created his own logo: “Cronkandy. Quality Since 1976.” This made his children laugh at the time, but 40 years later, Cronkandy has become an annual Christmas tradition. Nick spends between three to five weeks in the kitchen before the holidays making and packaging over 80 pounds of hand-dipped chocolates. He gives half of the boxes to friends and family as gifts and sells the other half.

“I’ve gotten pretty good at it,” he says. “It’s an intensive hobby that’s fun for a little while. I don’t think I’d like to do it all the time.”

His biggest goal each year is to finish his Cronkandy factory by Thanksgiving so Karalyn can make their family feast.