The third week in May is celebrated as National EMS Week across the U.S., and has been since 1974 when coined by President Gerald Ford. It’s a week to recognize those who go beyond the call in our local communities for the important work they do on the front lines.

Across the Wasatch Front, Steward Hospitals — including Mountain Point Medical Center in Lehi — are preparing to host the EMS Stewards of the Community awards. Each Utah Steward Hospital received several nominations for EMS providers who go above and beyond.

Though this will be the first time the EMS Stewards of the Community awards will be held here in Utah, it is actually the third year Steward Healthcare is hosting the awards. In 2017, due to a greater need to educate the community on the totality of what EMS do on a day-to-day basis by Steward Hospitals in the Massachusetts area, Stewards Hospitals created the awards. The program aims to provide a platform to recognize both the important work of EMS providers and those who display amazing aptitude and in turn, keep their communities safe and healthy. In 2018, the awards were expanded to Florida, Ohio and Pennsylvania in addition to Massachusetts. For 2019, the EMS Stewards of the Community awards will be held in nine states during the third week of May, with nominations and winners from 36 hospitals across the U.S.
Mountain Point Medical Center invited hospital staff members, fellow EMS providers and the community for nominations. Mountain Point Medical Center received nominations for EMS providers they work closely with and have come to know well. Among the nominees were Trent Jenkins of Saratoga Springs Fire and Rescue, Taylor Olsen of Saratoga Springs Fire Department, Jordan Hymas of American Fork Fire and Rescue and Mike Stevens of Lehi Fire Department and Saratoga Springs Fire Department.

“Given the nominees, it wasn’t easy to decide a winner,” said Maranda Davis, EMS director at Mountain Point Medical Center. All nominations were reviewed by a committee comprised of health care providers both locally and nationally. 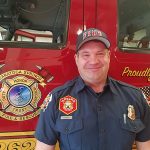 Trent Jenkins works full-time for Saratoga Springs Fire and Rescue and part-time for Lehi Fire County and was nominated by a fellow EMS provider. He is continually looking for opportunities to gain additional training and enjoys teaching and mentoring new EMTs. He provides compassionate care and — even on the most difficult calls when dealing with significant trauma or stressful pediatric patients — he has the ability to stay calm and consistently deliver a high level of care. 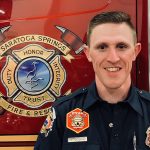 Taylor Olsen was nominated by his chief at Saratoga Springs Fire Department. Taylor has a passion for the job that becomes an example to all that he works with. Although fairly new, his skills as a medic are at a level of a peer many years to his senior. Taylor also has an ability to communicate with anyone regardless of age and reassure them in all of his interventions. On top of everything, Taylor has a great sense of humor, which his chief reports is a gift he provides to all. 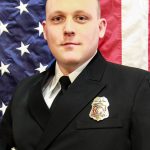 Jordan Hymas was nominated by his battalion chief at American Fork Fire and Rescue. When Jordan walks in the door for his shift, you can see in his eye and demeanor he’s at his “A” game and is going to be the “best of the best” for the next 48 hours. Jordan acts as a paramedic preceptor for American Fork’s Department and in 2018 was nominated by UVU as a top paramedic preceptor for their class. Jordan also has a great bedside manor (one of the best his chief has witnessed in 18 years) and is able to provide excellent written report and narrative to hospital staff.

Mike Stevens works full-time for Lehi Fire Department and part-time for Saratoga Springs Fire Department. He received nominations from his captain in Lehi and his chief in Saratoga. Mike is described as having a strong work ethic and dedication to improving patient care. He has proven time and time again that he has the ability to perform critical procedures in high stress environments with confidence and the level of skill to ensure the procedures result in a positive outcome. Along with being an outstanding paramedic, Mike has proven to be an excellent mentor, sharing freely his knowledge and expertise with others. As a mentor, Mike shows patience when teaching and counseling both new and experienced paramedics helping to instill confidence. He brings out the best in those he teaches. Mike has also taken on other roles at the Lehi Fire Department, where he only further serves the community. He has taken the lead in organizing the department’s honor guard and plays an integral role on the department’s physical fitness committee. One of Mike’s greatest passions — which speaks to the level of compassion he possess — is spearheading the Lehi department’s Sub for Santa program. Under Mike’s direction, the program provides Christmas for several less fortunate families within the community. 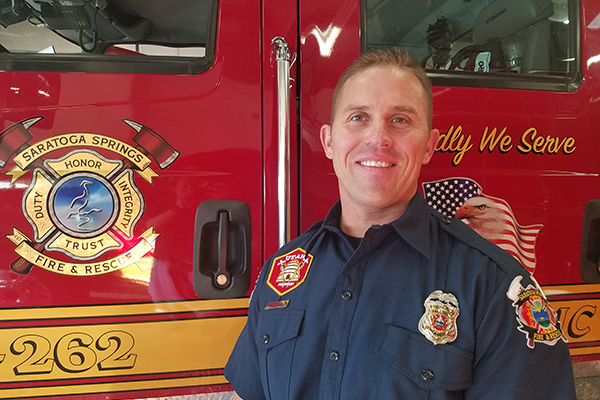 Mike Stevens of Lehi Fire Department will receive the EMS Steward of the Community Award on May 21, 2019.

Given Mike Stevens’ extraordinary commitment to his career, his drive to mentor other EMS providers around him and his passion for bettering the community in which he lives and serves, Mountain Point Medical Center is honored to name him as the 2019 recipient of the EMS Steward of the Community Award. Mike will be honored on May 21st at Rio Tinto Stadium.