Central Bank: Invested in Your Success 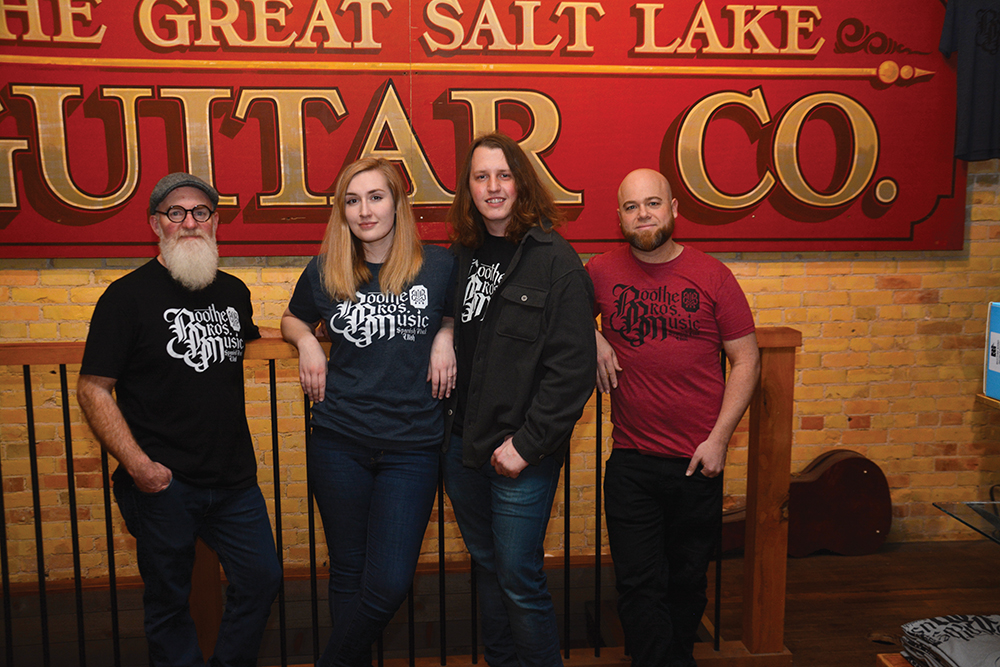 Boothe Brothers Music has been a business staple in Spanish Fork since originally opening in 1983. It has developed a reputation for superior service by experts who know and love music.

“We are dedicated to providing the best service possible,” says Curt Gordon, vice president of Boothe Brothers. “We get to know customers and then find an instrument that will bring them the best value.”

And they know what value music brings. The people who work there are musicians themselves — passionate, skilled musicians.

“Music is an art form,” Curt says. “This is about helping people create their art form.”

Dan Boothe was raised working in the store for his dad, Steve Boothe, and partnered with Curt to purchase the business from his father in 2017.

“They had been grooming us to take over for a while and we learned a lot from watching my dad and my uncle (Mike) run things,” Dan says. “We’re also excited to take things to the next level and expand into other avenues beyond Spanish Fork Main Street.”

The pair has already seen growth in the main store and through online sales.

Recently, Dan and Curt found out that The Great Salt Lake Guitar Co. in downtown Provo was for sale. While the timing wasn’t perfect, the business partners knew they needed to take action when faced with the opportunity to expand into the cultural heart of the valley.

“This opportunity came up and we couldn’t miss it,” Dan says. “It was maybe a little sooner than we wanted, but we jumped at it.”

Now, the Boothe Brothers Music sign that is so well known in Spanish Fork will be clearly visible across from the Covey Center in Provo.

“This is the hot seat of the county,” Curt says. “You have BYU and UVU close by. You have students moving here from all over. It’s a great, eclectic Victorian neighborhood. It has the right energy for our type of business.”

But jumping into expansion to a second location takes money and a banking partner that will help make the leap.

Enter long-time partner Central Bank. Since 1998, Boothe Brothers has used Central Bank for its business banking needs, and the long-term relationship made funding an easy process.

“We’ve had a great relationship with them for many years — especially the Spanish Fork branch,” Curt says. “They’re a block-and-a-half from our store, and everything they offer is modern and secure. They have great people and great resources.”

Central Bank staff members even brought the loan paperwork to Dan and Curt at the store so they wouldn’t have to leave their business unattended.

“They have made the process really convenient and made it so we felt like we could make this leap to a second location a few months — maybe even a year — before we were originally considering it,” Dan says.

The new location, which held a grand opening on March 15-16, has a full selection of instruments — from high-end orchestra instruments to beginner ukuleles — and the experts to help people find what they need. Boothe Brothers also has experts in instrument repair, which allows them to continue to take care of the customer after the sale.

“It’s at our core to help people,” Curt says. “We have great people who work with us and do that well.”

Since 1891, through good times and bad, wartime and peace, economic expansion and financial downturn, we at Central Bank have remained strong supporters of growth and development in Utah Valley.  And more than 128 years later, we’re still what we first set out to be in the beginning — an honest, stable, independent community bank interested in building the community based on strong partnerships and an optimistic view of what Utah Valley residents can do when they receive a little initial help.

Nobody holds a candle to the help we offer entrepreneurs. Our approach to banking is guided by personal relationships. Friendly and local, we offer a wide range of banking products and services — and decisions are made here.

At Central Bank, we empower dreamers and turn them into entrepreneurs. With our help, these entrepreneurs take ideas on scraps of paper and turn them into local jobs. For more than a century, Central Bank has supported this community by funding businesses here in Utah Valley. By investing locally, we keep more money in the valley’s economy.  When you bank with us, you create opportunity in the same community where you live and work.

In this BusinessQ feature, we celebrate one of our local business partners. We consider ourselves true partners in the entrepreneurial spirit for which Utah Valley is known. This partner is indicative of the relationship we forge with every business we build alongside motivated, hard-working local visionaries.