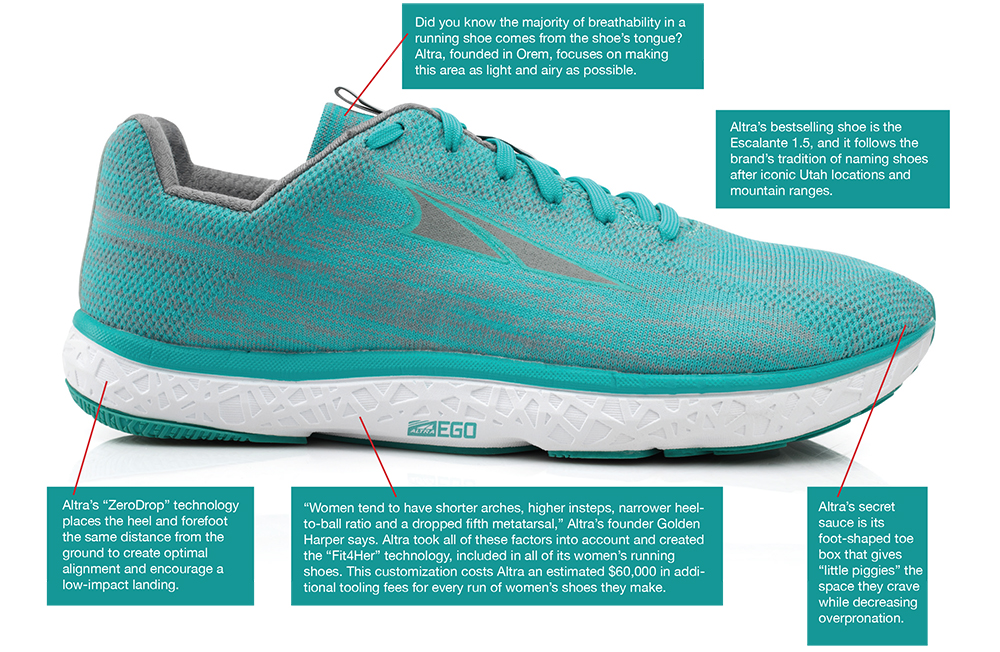 The best inventions often come from fixing a problem — and creating an entirely new product in the process.

Utah County-born Altra Running shoes are exactly that. In fact, “Altra” comes from the latin word “altera,” which means “to fix or mend something that is broken.”

“I noticed typical running shoes taper to a point at the top, but that is not the way our feet are naturally shaped,” he says.

Harper wanted to see what would happen if running shoes mimicked the shape of a healthy foot. He made his first prototype by heating up a pair of shoes in a toaster oven, taking them apart, and reconstructing them with a wider toe box.

In addition to giving toes more space, Harper wanted to fix another important problem — the height discrepancy between the front and back of the shoe.

“Most running shoes position the heel higher than the forefoot, which changes the way you walk and run,” he explains. “It’s not natural and it’s not good for the knees, hips and lower back.”

Harper put the heel and forefoot the same distance from the ground to encourage proper, low-impact running form.

While many shoe companies put form over function, Harper readily admits that at Altra, function comes before form.

“Some people look at our shoes and say they look like clown shoes, but we are OK with that because we know it is the best shoe,” he says.

Harper modified 1,000 pairs of shoes, sold them, and then paid the testers $10 to come back six weeks later and give their feedback. The test group reported a decrease in common running injuries, including plantar fascia, shin splints, runner’s knee, IT band issues, and lower back pain.

When it comes to launching a product out of Utah County, Harper says it is the best and worst place for new ideas.

“It’s awesome because there is so much innovation and people think outside of the box,” he says. “At the same time, there are so many great ideas here that it can be hard to find investors. It’s a competitive world.”