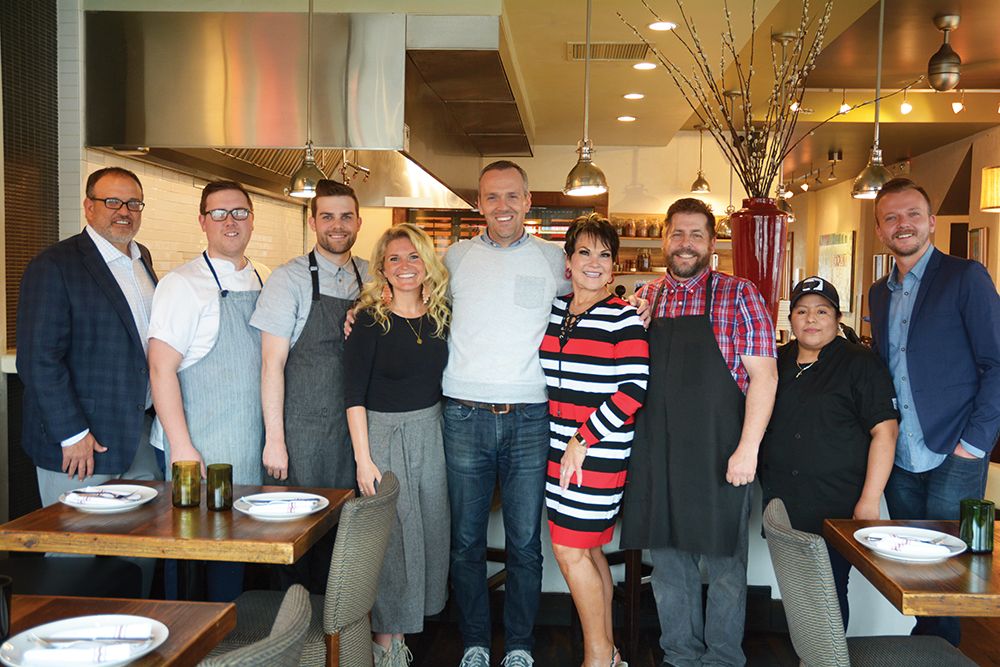 My restaurant reviews are always written from the point of view that every one and every place has a story. I want to look inside to understand the “why” of each establishment because it is always about more than just food. Probably no place in Utah County has more of a story and a “why” than the Heirloom Restaurant Group.

A couple months ago, I was dining with a friend at Provo’s Communal, which has been my go-to place for nearly a decade for connected dining and truly good food.  It was nearly closing time and we were the last in the place, when my good friend Kevin Santiago and his wife walked in for dinner. The staff seemed to know instinctively what he would order. I asked him if he came here often, and his reply sent me whirling.

What??? OK, I knew there was a story here worth writing and a piece for Utah County to understand about the restaurant revolution that is taking place south of Point of the Mountain.

I asked editor Utah Valley Magazine editor Jeanette Bennett for a bigger space in the magazine as this story was HUGE. And I also asked her to come to a giant interview I was arranging with the new owners of Heirloom Group and the executive chefs of each restaurant. As always, Jeanette was super supportive of me, and we were off on a new adventure in restaurant reviews for the magazine.

Kevin is not new to the food world with other ventures of 5 Star BBQ, Sweet Tooth Fairy, Cupbop and Sodalicious. His entrepreneurial skills are well known throughout Utah. However, jumping into the middle of existing restaurants that were all over the map with quality, profitability, and all sorts of different personalities of passionate owners was a whole different animal.

So my first question had to be “Why?” Why did a successful entrepreneur like Kevin jump into the food scene?

Kevin shared that every significant occasion in his life and family had been celebrated at Communal. He had an emotional connection with the location.

“Food is my love language,” he told me. “We bond through breaking bread together.”

Then he told me, “I woke up in the middle of the night and said out loud, ‘I’m gonna buy Heirloom Restaurant Group,’”

And so he did.

The first challenge was to bring together the original owners of Heirloom Group and navigate the waters of rebooting relationships. Colton Soelberg had left Heirloom to open CHOM Burger and create more needed family time. Joseph McRae was running Heirloom and had expanded the concept of the original Pizzeria 712 to a much larger operation. The original “why” for the organization was still intact: “To change how people eat in Utah.”

With Kevin’s new expanded vision, Heirloom serves everyone in every price point, and truly everyone can eat better. Kevin was assembling an unprecedented team of food professionals, and the spirit of team was brought together again. Kevin also brought new restaurants into the group to make this one of the most progressive and mission-driven restaurant companies in Utah.

During this Utah Valley Magazine culinary roundtable, I was in some sort of foodie heaven surrounded by owners and chefs who are as passionate about food as I am! Each member of the team feels a deep sense of personal ownership for their stewardship and brings their unique talents to their restaurants.

Adam Cold, the exec at Communal, brings his relationships with the local farmers in the area and believes the farm-to-table concept is what Communal is all about.

Kasper Valgren is the newest member of the team and executive chef at Station 22. When he arrived, he found a team with heart but lacked the training to execute. The gauntlet is thrown down and he is anxious to take his place among the heavy hitters at Heirloom Group.

Joseph McRae is still making things happen as the exec at Pizzeria 712 and brings the principle of excellence to everything he touches. He asks, “Is this my best?  Is this the best ricotta we can make? Is this the best crust?” He takes seriously that 10 years ago, this restaurant started the entire Heirloom Group culinary revolution in what was expected from restaurants in Utah County.

Sandy Bautista has been the exec chef since Black Sheep opened, but she has now been given the tools and resources to make it her personal best and wow, has she taken ownership! Black Sheep is back and the Hog Jowl Tacos are better than ever!

CHOM has also taken on the challenge of “best.” Colton wants this to be the premier burger place in Utah.

Kevin bought Blue Pablano and moved them to the old Mountain West Burrito location simply because in Kevin’s words: “They are the best al Pastor tacos in Utah.”

The food at Heirloom Group is in good hands but truly the most important piece to any restaurant is the service. Andrew Hansen has joined the group as director of hospitality. His job? “Make sure every meal served at one of our restaurants is a reason for celebration.” After meeting Andrew, I can assure you he will make it so.

The Heirloom team does not necessarily want to be the largest food group, but they do want to be the best. I asked Kevin if he is done expanding Heirloom. With a twinkle in his eye he said, “Our expansion is fueled by passion. We will see what passion is still inside our chefs yet to be expressed.”

Dining at these restaurants is pure joy. As someone who has worked my entire food career at excellence and passion of team, I recognize brilliance when I see it. I give a deep bow of gratitude to this entire team and the level of greatness they bring to the food culture of Utah.

Until next time, fill your life with scrumptious food from one of these gems and top it off with love.