How to Love Your Second Chances: Michelle Shepherd Reinvents the Stick Figure 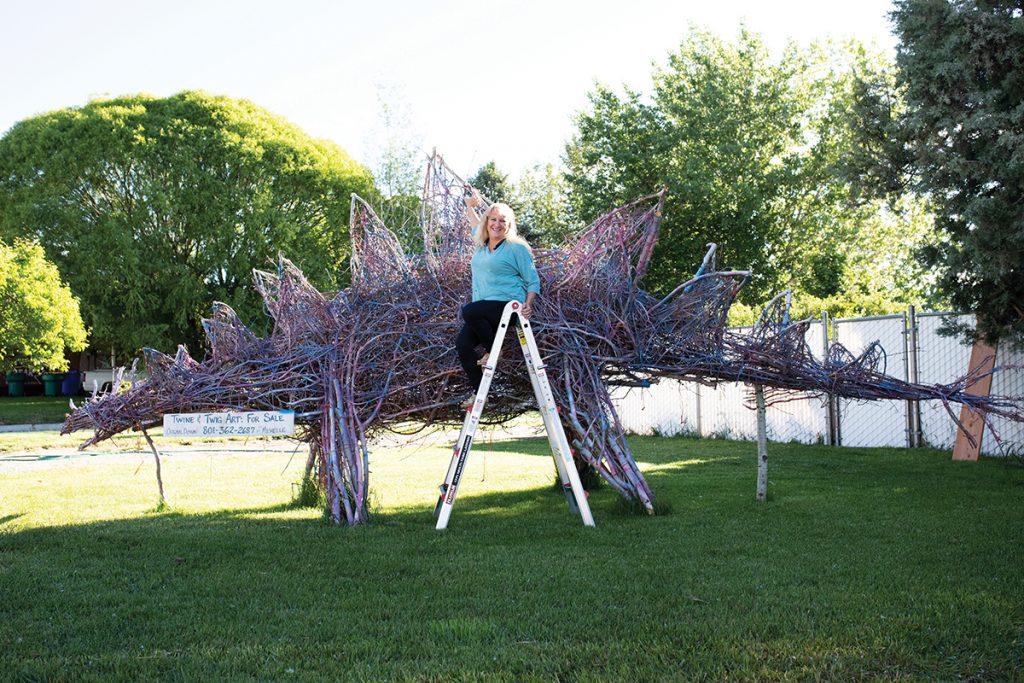 Michelle Shepherd creates larger-than-life-sized animals from tree trimmings both to sell and to give as gifts. Because she constructs them in her front yard, Michelle’s twine and twig creations can be admired from the Lehi street outside her home.

In spring of 2018, Michelle Shepherd’s trash transformed her art. She stepped out of her house to talk to her husband, who was trimming pear and apple trees. The remains of his yardwork stuck out of their trash cans like pillars of possibility. This 5-foot 2-inch former high school art teacher gazed up at the 8-foot sticks poking out of the garbage and thought, “I could make something out of this.”

Michelle dumped out the trash cans, grabbed some twine and began lashing sticks together until the framework for a 14-foot tall giraffe rose in her front lawn.

Before Michelle finished the narrow-neck creature, her plumber offered to buy her very first “twig and twine creation.”

Step One: Teach art to teenagers for 30 years

Michelle began her teaching career at Lakeridge Junior High in 1987. She had two children when she started and added her third three years later.

“Naively enough, I thought, ‘I can teach art and be a famous artist on the side,’” Michelle laughs ironically.

It took about seven years for her to feel like she knew how to teach. Until then, she’d often come home in tears, with brush strokes of stress and doubt on her mental canvas.

“I had to be about 10 times as mean as male teachers because I was small in stature and a female,” she says. “I had to learn how to be patient with teenagers. All they are is a hormone with feet at that age.”

After 10 years in the junior high trenches, Michelle became the first art teacher at Lone Peak High School when it opened in 1997. Over the next 19 and a half years, Michelle designed a career of going beyond expectation. She created the 15-foot tall paper mache knight statue that stands in the school’s common area. She organized a student art show every term and filled each with 1,200 pieces of student artwork. And she prepared approximately 60 kids for the AP Art exam each year.

Starting in 2003, a train of health issues began to dominate Michelle’s life: TMJ, migraines, pneumonia, back surgery, kidney stones. It came to a critical crescendo in 2016 when she had to retire in the middle of the school year, just shy of a 30-year career.

“I went from a marathon runner to being an invalid and a shut in. I just wanted to be done. I just couldn’t be in that much pain,” she says.

Miraculously her doctors found solution to her health concerns six months before her father unexpectedly passed away. Michelle was the only one of her siblings who was retired and able to care for their mother with dementia. She was her mother’s caregiver for 10 straight months until they found a home for her with full-time care.

Step Three: Tie it all together

Feeling like she received a second chance at life, Michelle unexpectedly achieved those “famous artist on the side” dreams. After she traded her stick giraffe with her plumber for work on the house, Michelle created a second “smaller” giraffe — only 10 feet tall. Next, she created a flamingo on the porch. Michelle “got a little carried away on the size” and it grew above the rain gutter to nine feet tall.

“I was going for a regular sized flamingo, but then it ended up being a flamingo on steroids,” she laughs.

Now Michelle has created two more flamingos, a frog, a turtle, a swan, an elephant and a stegosaurus. She has sold or gifted most of her 3-D stick figures.

Her twine and twig creations give Michelle a lot of street-credibility. At church, friends always ask what’s next and offer to bring her their clipping piles. Drivers honk at her while she’s balancing on a ladder lashing sticks to her latest project. One day she came out her front door to find a basket of flowers with a note thanking her for sharing her talents. She hung it on her porch to show the anonymous gift giver that she loved the recognition.

Michele attributes her ability to endure both health challenges and difficult art projects to her 30-year career in education.

“Being on stage with students was definitely a defining time of my life. I know I can do hard things because I taught junior high. It’s all about perspective,” she says.

She also attributes her vibrant personality to her career.

“I was really shy in high school, which people who know me now have a hard time believing” she laughs. “Because I became a teacher, I am forever changed. Now I talk to people in elevators and by the time I get to the third floor, I’m sharing recipes and crochet patterns.”

How to Stitch Together an Event: Cindy Cloward Invites the World to Garden of Quilts Previous post