Home Featured How to Reach Your Golden Age: Alina Fong’s Research Leads to Healing Others

How to Reach Your Golden Age: Alina Fong’s Research Leads to Healing Others 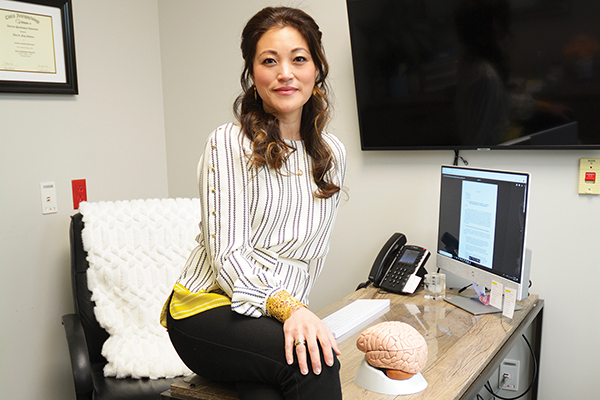 Alina Fong founded Cognitive FX in Provo to treat concussion patients and help them to return to normal brain function. Alina has plans to expand the clinic to Europe and other cities in the United States.

Alina Fong is building a bridge from Provo that wraps around the world. Along with Dr. Mark Allen, Alina opened up Cognitive FX in September 2014 to treat concussion patients with individualized regimens based on fMRI results. Before opening, Alina and Mark had studied neuroimaging technology in relation to concussion treatment for nine years. Alina now works as the clinic’s director, and Cognitive FX has treated over 2,000 patients.

“I can’t imagine doing anything else with my life — to see people who come so distraught, needing to be healed, looking for hope. They leave our clinic so changed and able to get to life again,” she says.

Step One: Value the brain

In 1995, Alina left her home in Hawaii to study at BYU, earning her undergraduate degree and then a Ph.D. in clinical neuropsychology. With her education completed, Alina began her career at the Utah Valley Hospital Neurotrauma Rehabilitation floor, helping patients heal from strokes and brain injuries.

“I understand what can happen to the brain with severe trauma, and I began to be drawn to concussion patients when I saw they were improving at a much faster rate,” she says.

At that time, limited research existed surrounding how to treat concussions, so Alina started to fill that void. Eventually, her interest in concussions merged with her expertise in neuroimaging. She spent years creating protocols to use fMRIs and neuroimaging technology to clinically treat concussion patients. Those treatments turned into the first version of Cognitive FX in Boston. In 2014, Alina and Mark moved the research and clinic to Provo to be closer to home. Now, Cognitive FX is booked with patients several months out, with people coming from around the globe.

“Each therapy is different because it’s all tailored to the patient’s fMRI and symptoms. The treatment we offer is individualized and is the fastest way to recovery. We are constantly researching to improve the treatment for our patients,” she says.

Although Alina’s medical brain child has seen more than 2,000 patients and has the largest database of fMRI studies of concussion patients in the world, the path to international expansion and recognition has not been without its moments of uncertainty.

“It’s not easy being a woman in the world of science. I feel like I’ve had to climb an uphill road from the very beginning,” she says. “I tried to envision the most ideal comprehensive concussion clinic I could, and I was told by several people, ‘I don’t think this is possible.’”

Despite the naysayers, Alina felt a pull to continue her research. She wanted to help people heal — and she wanted to prove everyone wrong. Those two desires carried her though days when giving up tempted her.

“I knew what Mark and I had was revolutionary. I knew it was different from what everyone else was doing at the time, and I also knew it was the right thing to do. I do feel like there has been a guiding hand. Our faith that what we’re doing is the right thing has helped push us along,” she says. “But the fight isn’t over. Now my battle is trying to open up as many clinics as I can and help as many people as I can.”

Even with an international waiting list and a career that feels more like a calling, Alina knows her most important job is to be a mom to her three daughters, ages 14, 10 and 6.

“They’re everything to me. This isn’t worth anything if I don’t have them,” she says. “I’m trying to raise them to be strong, independent, driven women of faith. I feel like as hard as my road is, it’s going to be harder for them as they get older.”

Amid the challenges of being a mom, a scientist and a clinic director, Alina chooses to love the moment. She’s excited for the future, yet enveloped in the adventure of the present.

“This job has offered me the opportunity to see the world and to experience different cultures,” she says. “I feel so fulfilled with my family and with my career. This is what I’ve worked for — this golden age of enjoying where I’m at and not regretting my past or always looking forward to something else. I’m just enjoying where I am. And yet I feel like I’m ramping up to this diamond age. ”

Cognitive FX is the only facility of its kind, and patients have come from almost every continent and almost all 50 of the United States.

Ironically, Cognitive FX has more patients from the Netherlands than the United States at the time of Alina’s interview with Utah Valley Magazine. The clinic has over 200 Dutch patients who have already come or are booked to come.

This demographic came about because two women from the Netherlands suffering from brain injuries learned about the treatments offered at Cognitive FX. After experiencing positive results in Provo, they wrote about their experiences and dozens of people from Holland began signing up for treatment as well.

“They just love Utah because of all the national parks. They come and make a vacation out of it. They do therapy then spend a month seeing Bryce and Moab. I feel like we’ve single handedly helped tourism in Southern Utah with all these wonderful Dutch people who come,” Alina says.

Women in Business: The A-Team at Gatehouse No. 1 Previous post

In the Bag: WANDRD Travel Bags Pack a Sleek Punch Next post