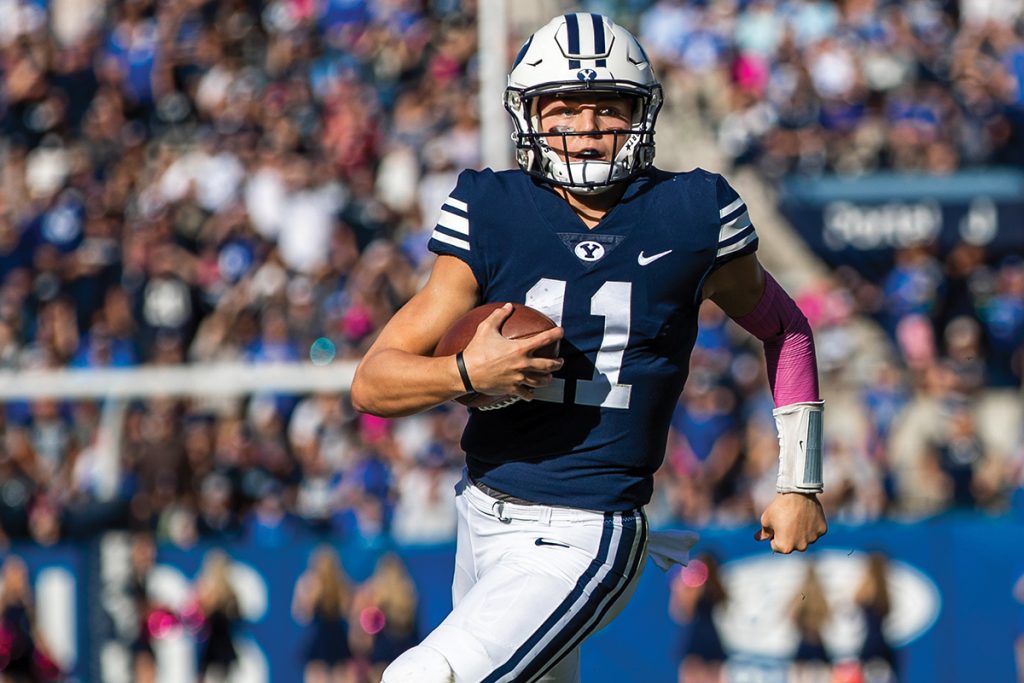 Sophomore Zach Wilson emerged quickly last year into the offensive leader for the Cougars, starting the last seven games of the season, enamoring fans with his arm and his legs, finishing the season with a team-high 1,578 yards passing — setting a BYU record for freshman passing efficiency with a 157.23 — and was fourth in rushing yards with 221. Wilson returns as the undisputed starter and should build on last year’s record-breaking season.

While Wilson will grab the headlines, the offensive line will be as strong as the Cougars have had in years. Losing only one starter from last year, the BYU offensive line is deep, experienced and still relatively young. Junior Tristan Hoge (right guard) and sophomores Brady Christensen (left tackle) and James Empey (center) each started every game last year and will provide leadership and continuity. Senior Thomas Shoaf, junior Kieffer Longson and sophomore Keanu Saleapaga each started at least two games last year at left guard and all return.

And the line has depth. Redshirt freshman Harris LaChance and junior Chandon Herring should also compete for playing time and push the returners.

With a more open offensive set, tight ends will be expected to get down field and catch balls. Junior Matt Bushman does that as well as any tight end in the country, leading the nation’s tight ends in yards per catch last season (17.62). Senior Moroni Laulu-Pututau returns after an injury made him miss eight games last season and will pair nicely with Bushman. Sophomore Joe Tukuafu also returns after a two-year hiatus from football.

Seniors Aleva Hifo, Micah Simon and Talon Shumway, along with sophomores Dax Milne and Gunner Romney, will stretch the field — vertically and horizontally — and be much-needed targets down the field.

The biggest question mark for the offense? Running back.

BYU has a stable of capable backs, but needs to avoid the injury bug to keep a lack of depth at bay. Sophomore Lopini Katoa returns after leading the team in rushing last year with 423 yards and eight TDs (5.57 yards per attempt) and is an early Doak Walker Award candidate. However, a pair of graduate transfers — Ty’Son Williams from South Carolina and Emmanuel Esukpa from Rice — made all BYU fans have a little nicer summer, bringing depth and experience to the group. Redshirt freshman Tyler Allgeier and junior Kavika Fonua give BYU some more backfield breathing room.

He returns for his sophomore year with reins solidly in hand. Assuming his surgically repaired shoulder holds up, his legs and arm will give Cougar fans plenty to cheer about.

Officially Wilson’s backup, he’s too good of a player not to find playing time. Watch for BYU coaches to find ways to get Hall in the game — probably in “wildcat” formations.

Watch for the Wilson-Romney connection to become more proficient as the sophomores continue to gel together. Romney will make big strides in production and build on his 13 catch, 162 yards and 2 TD effort from 2018.

1 And only school to play four power conference schools (Utah, Tennessee, USC, Washington) in the first month of the season.