Celebrity Lookalikes: 7 Locals With Doppelgängers Worth a Double Take

When we started the celebrity lookalike contest two decades ago, we thought it would be a one-time feature. Nineteen years later, our readers are still supplying us with doppelgängers worth a double take. Here is our latest collection of lovely locals with famous faces. 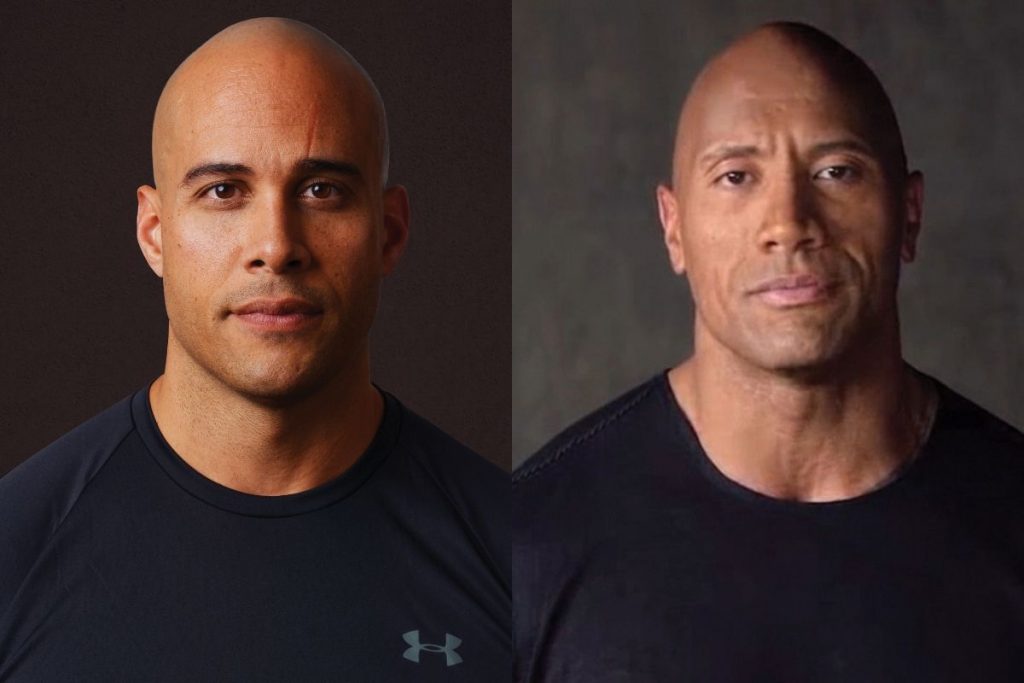 At first glance, the similarities between Dwayne Johnson (also known as “The Rock” from his professional wrestling days) and local entrepreneur Philip Niu are obvious. They are both Polynesian, tall, dark and handsome — but when you dig a little deeper, the similarities get more striking. They both grew up in Hawaii, they both played college football (Philip was a tight end for BYU, Dwayne played defensive lineman for the University of Miami), both of their football careers were ended by knee injuries, and they both have three daughters.

The celebrity comparisons started when Philip shaved his head to play a Lamanite in a film about The Book of Mormon.

Philip, who has taken up acting on the side, actually auditioned for a part playing Dwayne Johnson’s brother in the movie “Fast and Furious: Hobbs & Shaw.”

For now, Philip jokes that being a lookalike is mostly just letting people down when they realize it’s not him.

“It’s a compliment for sure, but it sucks to disappoint people,” he says.

Philip lives in American Fork with his wife and together they run Parachut, which can be described as an Airbnb for camera gear.

Who is Dwayne Johnson?

Dwayne Johnson is a retired professional wrestler and popular actor. In his 8-year wrestling career he was known as “The Rock.” He has been in films including “Jumanji” and several of the “Fast & Furious” movies. He was also the voice of Maui in “Moana.” 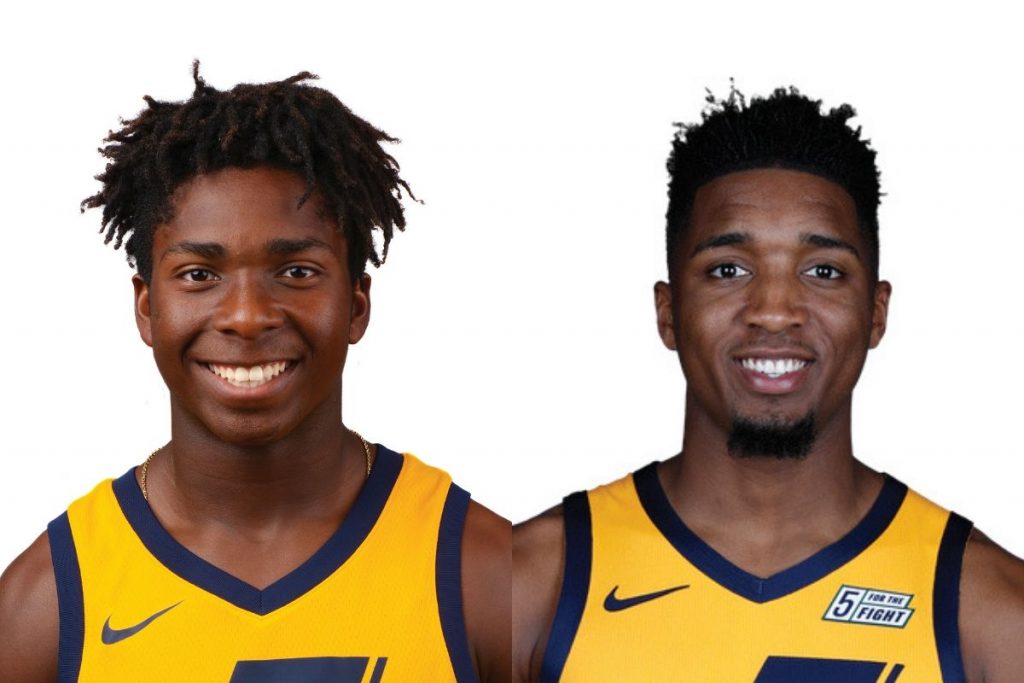 Lone Peak senior Shawn Wood might look like Utah Jazz guard Donovan Mitchell, but football is his sport of choice. The wide receiver was first told he looked like the sports star while working at Blue Lemon and has heard it many times since.

“It comes up most days and kids at school will jokingly tell me ‘Great game last night!’ after the Jazz play,” Shawn says.

Shawn’s closest brush with his celebrity twin was when Donovan signed his cellphone case at a preseason game last year.

“If I was Donovan for a day, I would travel and donate to charity,” Shawn says.

Who is Donovan Mitchell?

Donovan Mitchell is a guard for the Utah Jazz. He has previously played for the Louisville Cardinals and the Denver Nuggets. The New York native is also the winner of the 2018 Slam Dunk Contest. 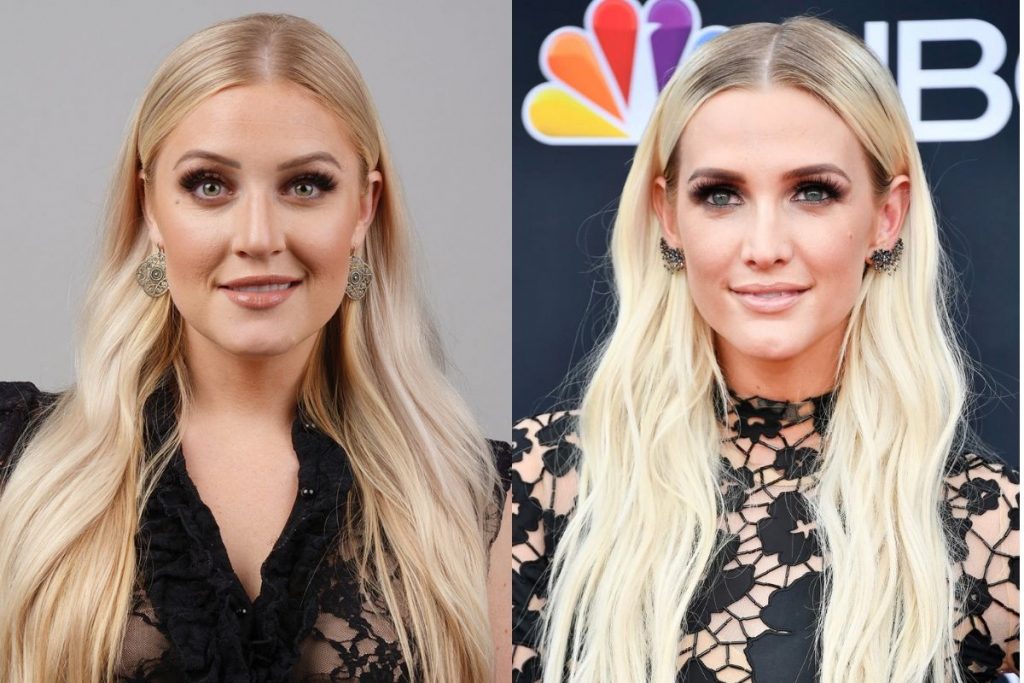 Jessie McArthur’s celebrity lookalike, Ashlee Simpson, is most well known for being the sister of singer and reality star Jessica Simpson. Jessie has a sister, too —  three of them actually, and one brother. She grew up in St. George and currently lives in Pleasant Grove with her husband of five years.

“I have heard that I look like her for a couple years now,” Jessie says. “Maybe as we age we look more alike!”

Jessie loves the beauty industry and works at a salon six days a week as well as being a rep for Torri Belle Cosmetics.

“I love getting to know people and learning about them and what motivates them,” Jessie says.

It was actually one of Jessie’s clients who nominated her as a lookalike. In addition to sharing a resemblance with Ashlee, Jessie also sings like her celebrity counterpart.

Jessie says that if she were Ashlee for a day, the first place she would head is straight to her closet.

“Then I would go shopping and make donations to charities,” Jessie says.

Who is Ashlee Simpson?

Ashlee Simpson is a singer, songwriter and actress. She is the younger sister of singer Jessica Simpson. She had a reoccurring role on TV show “7th Heaven,” and her own reality show, “The Ashlee Simpson Show,” She also played Roxie Hart in “Chicago” on Broadway. She is the mother of two children and is married to Evan Ross, son of Diana Ross. 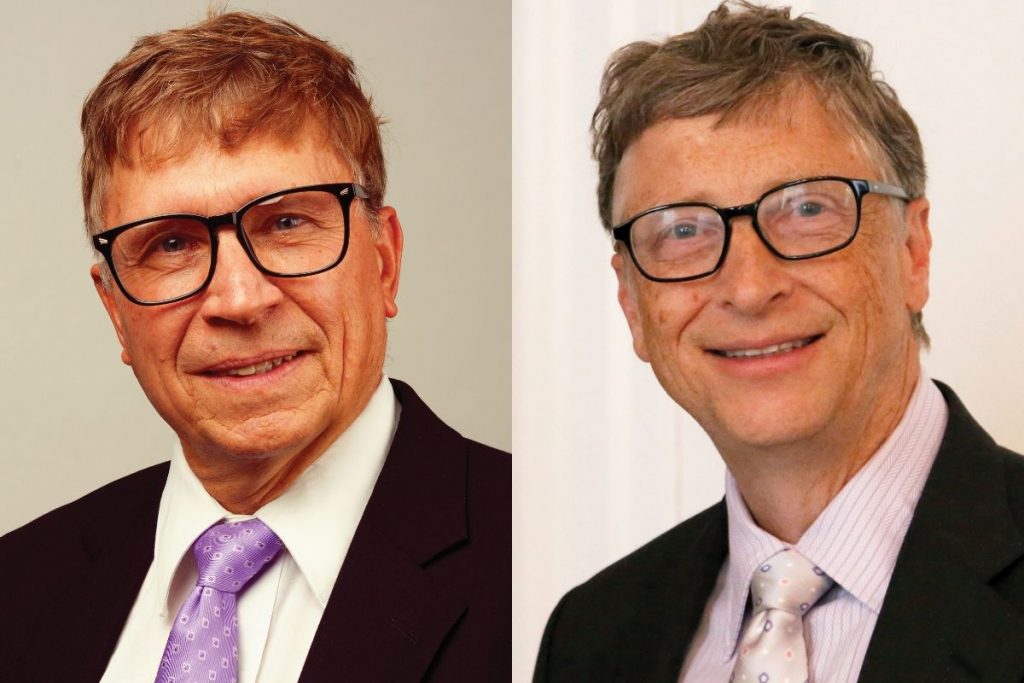 Gregory Lyman, who is now retired, worked in manufacturing and database management for many years and says he and Bill Gates share the kinship of being “geeks.”

“People I’m with every day rarely comment on the similarity, but when I travel, it’s not uncommon to have someone make the connection,” Gregory says. “One of the most embarrassing times was when a flight attendant announced over the intercom, ‘Well folks, I think we have a celebrity on board with us today. If this gentleman isn’t Bill Gates, it’s surely his double,’ and then everyone commented as I dragged my carry-on down the aisle.”

Gregory grew up in south Provo and has lived in Pleasant Grove for 40 years. He and his wife, Lynette, are the parents of six children and 22 grandchildren.

Who is Bill Gates?

Bill Gates is a business leader, investor, author and the principal founder of Microsoft. Bill and his wife, Melinda, are also heavily involved in humanitarian work and their foundation is one of the world’s largest private charities. 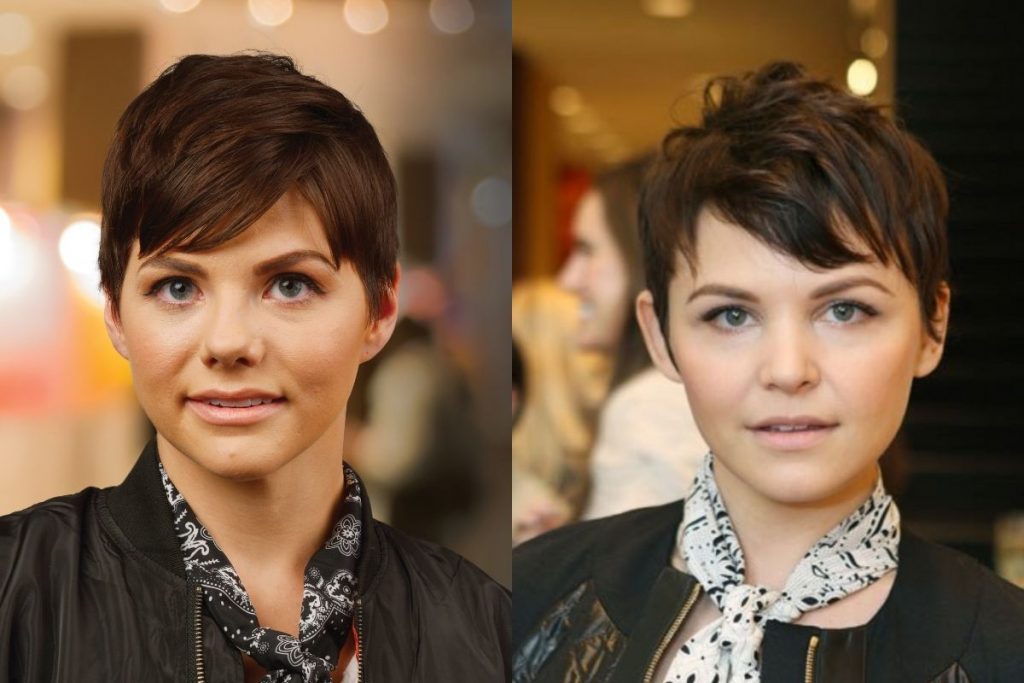 When Hayley Clark had chin length hair, a few people told her she looked like actress Ginnifer Goodwin. But when Hayley got her first pixie cut, suddenly everyone started see the resemblance.

“People come up to me all the time at church, the park, the splash pad or the grocery story and tell me I look just like her,” Hayley says. “It’s so flattering and also pretty crazy!”

Similar to her celebrity counterpart, Hayley is a woman of many talents. She grew up dancing and actually moved to Los Angeles for a while to pursue it as a career. When she moved back to Utah, she met her husband, Brandon (who owns food truck/restaurant Kitchen Eighty-Eight), and they had three kids in three years. She recently just launched a swimwear line called Basil Swim Co.

The similarities between Ginnifer and Hayley aren’t just skin deep — they both have two sons and their parents have the exact same names, Linda and Tim.

Who is Ginnifer Goodwin?

Actress Ginnifer Goodwin has appeared in the TV fantasy series “Once Upon A Time” and romantic comedies like “He’s Just Not That Into You.” She also voiced Judy Hopps in the Disney film “Zootopia.” 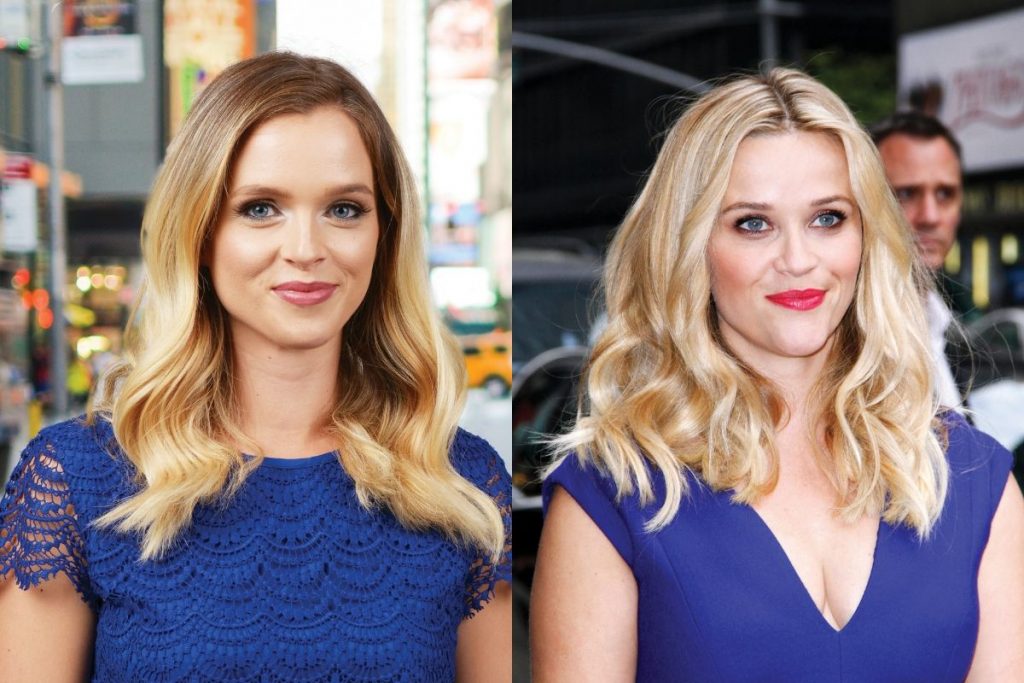 Laura Wade was first told she looks like Reese Witherspoon at 16 on a dinner date.

“It has not stopped since,” she says.

Laura Wade grew up outside of Washington, D.C., and now lives in Riverton with her husband, Jordan, and two children, Aubrey and Ezra. She has lived in nine homes over the past eight years and in every city someone has noticed her resemblance to the movie star.

“It gets mentioned a lot more when I’m in a new environment,” Laura explains.

In addition to looking like Reese, Laura also loves to cook (just like Reese does) and has lived in Tennessee, which is where Reese was raised.

Laura is a fan of Reese’s movies and her clothing line, Draper James. In fact, Laura says if she could be Reese for a day the first thing she would do is try on all of her dresses.

Who is Reese Witherspoon?

Reese Witherspoon is an actress, producer and entrepreneur. She won an Academy Award for her portrayal of June Carter Cash in “Walk The Line.” Other notable films include“Legally Blonde,” “Sweet Home Alabama,” and most recently the HBO TV drama “Big Little Lies.” 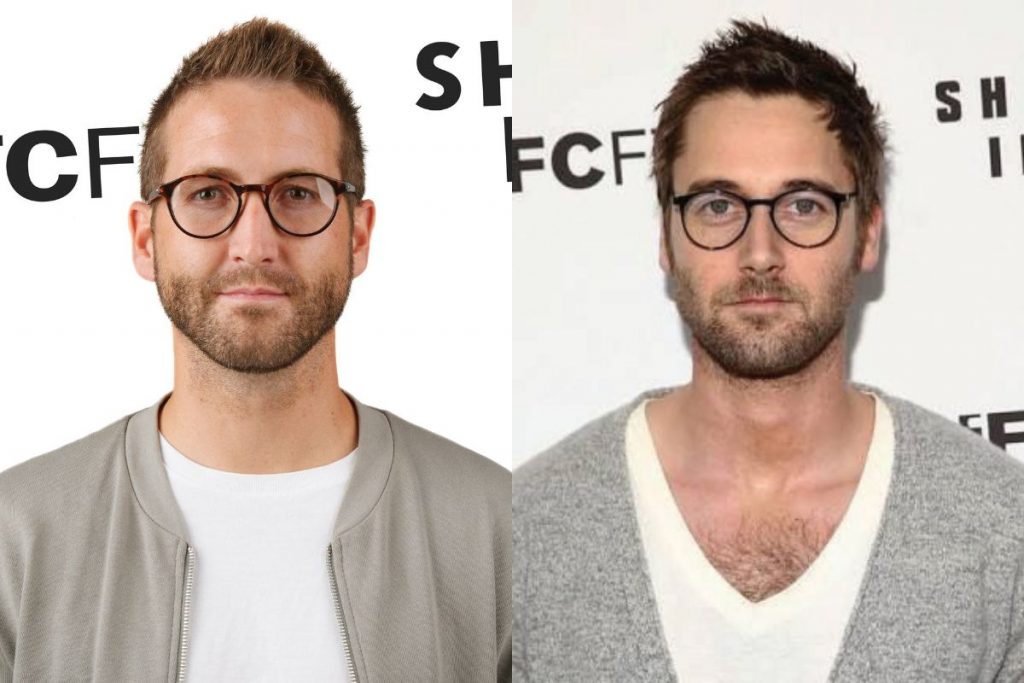 Lehi resident Shad Webb has been asked at least 20 times, “Has anyone ever told you that you look just like that guy from the show ‘The Blacklist’?”

“That guy” is actor Ryan Eggold and Shad says his wife thinks he is actually the better looking one. Plus, Shad is two years younger than his celebrity double.

When he isn’t working, he loves being outdoors and spending time with his wife and three children.

“If I could be Ryan Eggold for a day I would invest a bunch of money in commercial real estate in Utah!” Shad says.

Who is Ryan Eggold?

Actor Ryan Eggold is best known for his role as Tom Keen on crime drama series “The Blacklist.” He is also a main character on NBC’s medical drama “New Amsterdam.”