A Lifetime of Achievement: Blake Roney 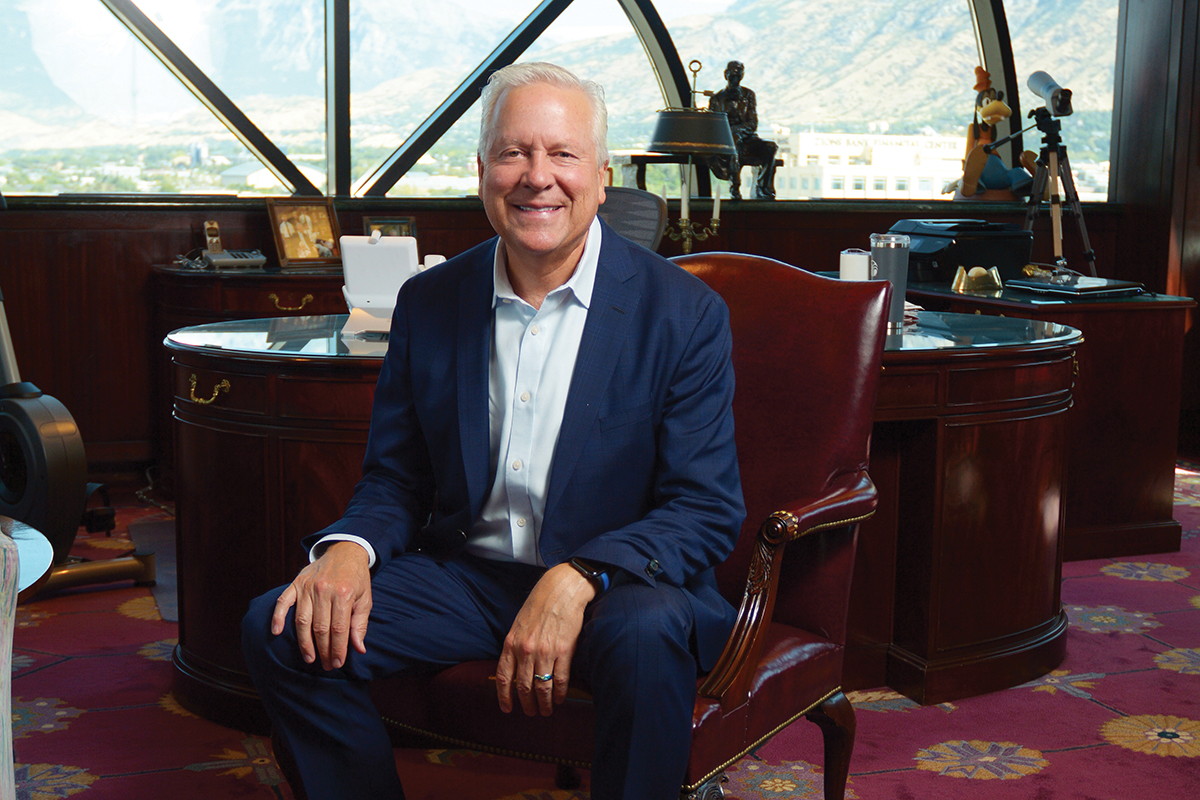 Blake Roney has gone public with a lifetime of entrepreneurial and philanthropic contributions to Utah Valley.

In 1996, Blake Roney and his partners were going through the process of taking 12-year-old Nu Skin public on the New York Stock Exchange. The “dog and pony” show had Roney and Steve Lund traveling around the country talking to the “smartest guys in the world” and then jumping in a limo and giving the same presentation to the next group of financial wizards.

“It started getting boring to me,” Roney told BusinessQ. “So I announced to the team that I was going to start singing my presentation. They looked at me like I was crazy. But I did it. I sang part of my next Nu Skin pitch.”

And the suits around the board room who heard his musical debut found him memorable. And they invested.

Roney’s sense of humor and unconventional approach is part of his signature leadership style during the 35 years since Nu Skin began with dreams of lotions, potions, high-rises and airplanes.

“It’s hard to put a finger on how it all happened because we just went to work every day and figured out how to help people and what to do next,” Roney says. “We used to be these young guys who were kinda successful in town. But now we’re not young anymore. Time passes. But so much good has come from what we created. And it’s been so much more fun than I anticipated in the beginning.”

In the beginning, the Nu Skin founders were using “all of the good and none of the bad” on their ingredient list. They also used that mantra for growing an employee base and corporate culture.

“We tried to do good from the beginning, but we didn’t talk about it very much,” Roney says. “But our causes and our mission have ended up being who we are. It’s the most important thing about us, and we’ve become loud about it, which has helped us succeed.”

In previous interviews, Roney had described his life like an Indiana Jones movie, with “scary things” lurking in the corner and a sword fight all day long until he escaped into his car and drove down Provo Center Street at the end of the day. His 2019 movie plot?

“It’s a little bit like ‘Groundhog Day,’” Roney says. “People say everything is different now because of millennials and social media. It’s not. People are still people. And problems are still problems.”

Roney says being called as an LDS mission president to France came as a bit of a relief as he could walk away from the “ninjas” in the hallway of Provo’s first direct sales company to go public.

“If you’re involved in any business on a high level, you’re going to solve all kinds of problems you didn’t oversee and you need creative solutions,” he says.

Another movie title he chooses to describe the entrepreneurial journey is “Frankenstein.”

“You create this baby and then it owns you,” Roney says. “And it tells you that you can’t go home and that you should feel guilty any time you are away. It takes great self-discipline to segment to also be a great father, a great spouse and a great friend. You have to redesign your life so you can still hit it out of the park. You create Frankenstein, but you can’t let it control you.”

Roney believes his key to accomplishing more than the average Blake is prioritizing. And family is at the top.

“There’s a sense when you’re in a startup that after you succeed you will have an awesome quality of life,” Roney says. “But that’s inaccurate. You have to form the life you want while you’re doing it. The end never comes, even if you have a big payday. I made sacrifices when my children were young, but as they grew I spent more time at home. It’s not because my business required less of me, but because my children required more of me. I wasn’t going to miss parent-teacher conference or football games.”

During one particularly long meeting with Wall Street execs, one of Roney’s kids called. “Can you come play?”

So Roney packed up and left the meeting.

“My employees were beside themselves because the building was on fire, and I was walking out to go play with my kids,” Roney remembers with a smile. “I preach family values in the business. I had to live it, too. There’s no value in getting rich if your family doesn’t like you anymore.”

If You Fail to Plan

In the early years, Roney would write down tasks on 3×5 cards and keep them in his shirt pocket. Common listings included playing with his kids, sourcing products and making important phone calls. Every evening, he would prioritize his tasks for the next day.

“And then the next day I do the top priority first, and then number two. It’s tempting to slip down to number 8 and 9 if they are simple, but then you aren’t getting the most important things done,” he says. “So at 6 o’clock, I would often walk out to head to a game, and my employees would say, ‘But everything’s bad. You can’t go now.’ And I would say, ‘I would be dishonest if I didn’t follow my plan.’ And the building would still be on fire in the morning. It never stops burning.”

One of Roney’s most visible community investments has been the Shops at Riverwoods.

“It’s a beautiful property and a long-term project for my family to manage.”

Roney requires his children to earn a master’s degree before they can come to work for one of his entities.

“I don’t want anybody hanging around just getting a check. They have to be contributors or they wouldn’t feel good about themselves,” he says.

Roney’s positivity and belief in himself and others has its genesis in the first hard days at Nu Skin. He knew Lund could find a lawyer job if the company folded. But Roney was the president. “Nobody’s hiring those,” he says. “If we fail, I don’t have a job in the morning. So everything was scarier for me than it was for him.”

But the scary part now is self-imposed. For Halloween one year, Roney took Lund’s furniture that had always looked like a coffin to him and put a full-sized photo of Lund inside and on display. But the fun was two-sided.

Early on, Nu Skin was know for its policy of dressing up for work. Lund and Roney even walked into the company party at Seven Peaks wearing suit coats. With some pre-planning and subpar acting, they pushed each other into the pool and sent the message, “From now on, you can dress however you want at work. Suits and ties aren’t required.”

At age 61, Roney’s life no longer includes day-to-day responsibilities in his spacious Nu Skin office, decked with the first iPhone (Nu Skin originally used that name for an early-Internet phone), Olympic memorabilia from when Nu Skin was the first to donate as the Winter Games re-emerged from scandal, and footballs signed by Chad Lewis.

His 3X5 card of to-do lists now include having his hands, brains and heart in multiple downlines. Private equity. Traveling most weekends as an area authority for The Church of Jesus Christ of Latter-day Saints. Grandpa.

“I parachute into everybody else’s business and go, ‘I wouldn’t do it that way. Goodbye,’” Roney laughs.

While his background in business prepared him for leadership in church and community, it’s not apples to apples. He’s not selling lotion to church congregations, grandkids or nonprofits.

“I have to be careful not to manage people or to start acting like a CEO,” Roney says. “But my leadership roles have been helpful in terms of understanding people, their way of thinking, their goals and their desires. I like people. I try to be a happy, humble helper wherever I go.”