Super Striker: Hermann Trophy Candidate Elise Flake is True Blue, Through and Through 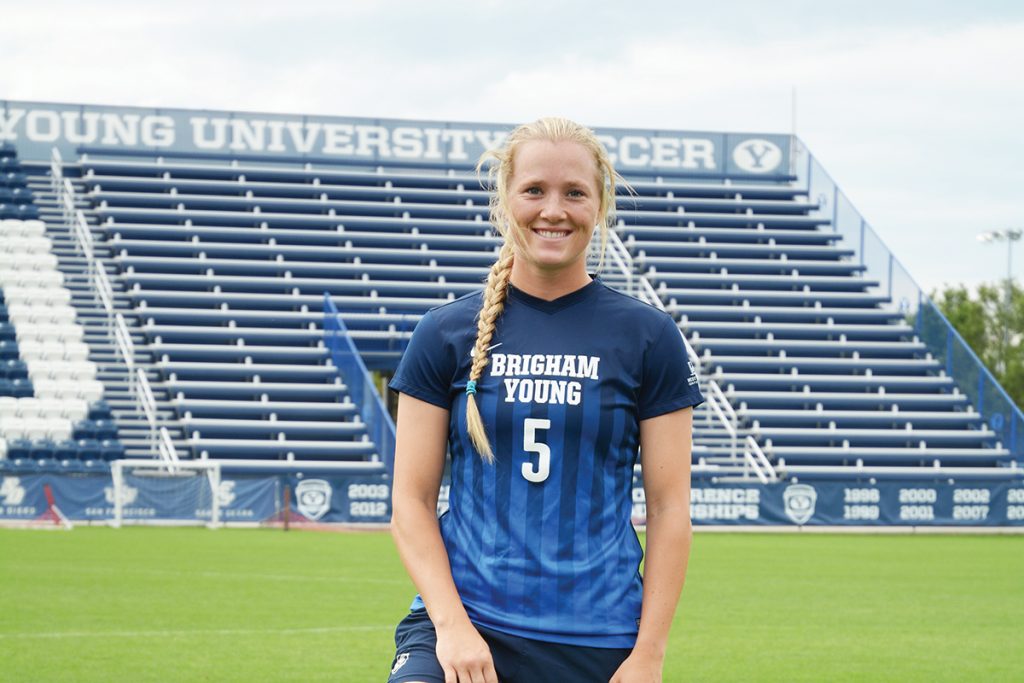 “My uncle made a poster where my face was Photoshopped on the BYU soccer team photo and I hung that poster on my wall,” she says.

Luckily for the Cougars, the poster was prophetic. After a junior season that saw Elise lead the team with 14 goals and five assists while playing in all 19 games, Elise joins teammate Mikayla Colohan on the 2019 Hermann Trophy watch list, a trophy given to the best women’s soccer player in the nation.

However, despite personal accolades, the Maple Mountain High graduate wants team goals to supersede any trophies on her mantel.

“We were obviously pleased to win the conference championship last year, but bummed to lose in the first round of the NCAA tournament,” she says. “We set our sights further for this year.”

It’s a forward-looking view Elise learned through a lifetime of soccer. A native of Mapleton, she started playing rec soccer and quickly began to excel. A school friend encouraged her to try out for a club team. Eventually, she made her way to the elite Utah Celtic club team coached by Robyn Bretzing, where she played for six years.

Her Utah Celtic roots followed her to BYU, where she roomed with Utah Celtic teammate Lizzy Braby.

“My freshman year was different, but I embraced it,” Elise says. “It was all new and exciting. Lizzy and I were roommates and got really close as we went through all of that together. Now, we can help the freshmen as they come in.”

Elise joined a solid Cougars forward group complete with stars like Ashley Hatch and Nadia Gomes, so she embraced her role as a spark off the bench and learned from those ahead of her. She still played in 17 games and scored her first collegiate goal against Denver in her ninth appearance.

Since then, putting the ball in the back of the net has become an Elise specialty and something the team will need more of this year, with a tough schedule that includes two pre-season Top 20 teams in Texas A&M (No. 12) and conference foe Santa Clara (No. 13).

But outside the lines, Elise appreciates the chance to play close to her family and friends and to be just minutes from the town she grew up in.

“My family is able to watch me play,” she says. “I also love playing at a place with so many great people who care about the team and us as individuals. We have a lot of support here.”

In fact, playing under the lights at South Field keeps things hopping. BYU is routinely among the top teams in home attendance, and the family-friendly atmosphere draws fans from all over.

“This stadium is amazing,” Elise says. “Playing here is like no other place. It helps us play better, and everyone on the field and in the stands has a great time.”

A favorite hangout “My brother is a year older than I am and played football, so a typical Friday night in high school would have found me at the football field watching him. I also enjoy going to the hot pots up Spanish Fork Canyon. Now, I spend a lot of free time playing Spikeball. It’s a blast.”

Favorite local restaurant “My family loves Cafe Rio. We will sometimes all just share different salads. If my dad has his way, though, we will probably be at Outback Steakhouse.”

Why BYU? “My family is 100 percent BYU. I think I would have come here whether I played soccer or not.”

From Marriage and Fatherhood to Playing on Both Sides of the Rivalry, Austin Lee Comes at College Football with a Wider Approach Next post