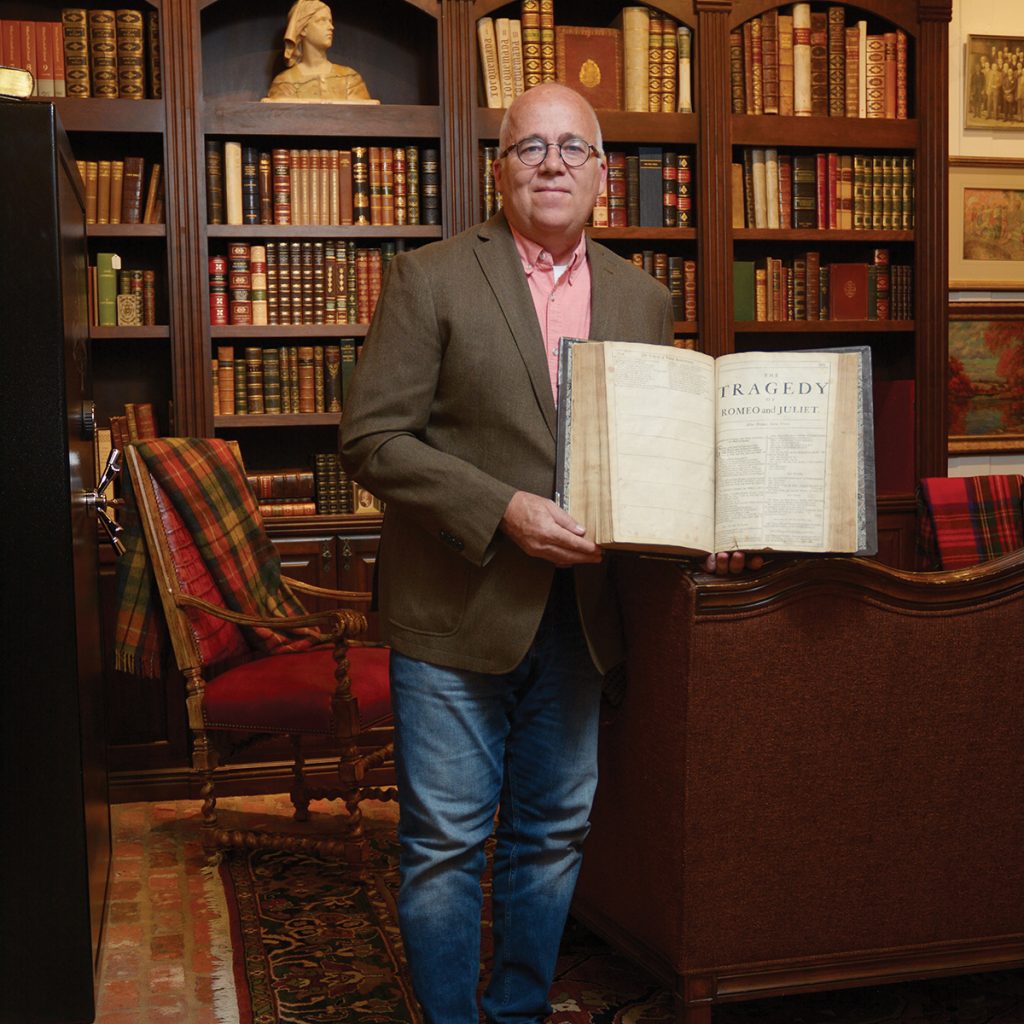 Sometimes Reid acquires books by chance in little British bookstores or he hunts down a specific copy. And sometimes he bids high at an auction, which is how he got this Shakespeare Folio. “This is one of the ‘ooh and ahh’ books when people first see it,” Reid says. “It looks like Harry Potter’s book of spells, but it’s one of the early copies of Shakespeare from the 1600s. This is actually the first edition to have all of Shakespeare’s plays.”

Reid Moon is a professional treasure hunter. His collection is never complete, although he has everything from a 1746 copy of Handel’s “Messiah” with an inscription from King George, to an original copy of Charles Darwin’s “Origin of Species.” He has collected documents from Mother Teresa, letters by Albert Einstein and artifacts from the JFK assassination — as well as movie props from recent classics like “Lord of the Rings,” “Hunger Games,” “Jurassic Park,” “Titanic” and “Harry Potter.”

This history guru, antiquarian and owner of Moon’s Rare Books started his career by taking over his father’s bookstore in Dallas. He went from selling new releases to out-of-print books to rare books as the world transitioned from pre-internet to Amazon-topia. Reid sold his Dallas store in 2012 to pursue collecting exclusively. He then spent much of his time on the road in pursuit of treasured books and artifacts.

“Almost every trip involved a stop in Utah. I realized if I were based in Utah, that would cut down on my travel, especially since one of my strong specialties is early Utah history and early church history,” Reid says.

“Our goal is to acquire books, documents, artifacts and photographs that have a story. And that’s what we share,” he says.

Visitors walk into a museum-like experience, as Moon’s resembles an old English village. Casual browsing usually turns into an informal tour from employees. The displays change almost every week, so visitors experience brand new history new each time they come in.

On the weekend nights when Reid isn’t racking up his annual average of 100,000 miles, he holds “show and tell” sessions. He’ll open the 400-year-old door into the back room and show books and artifacts one by one to whomever wants to listen.

Reid hosts over 150 of these presentations each year and takes seriously the “tell” part of the presentation, sharing the story behind each item.

He tells his stories with meticulous flair, usually leading to a grand reveal at the end of what book he chased around the country or who owned the book originally.

“That’s what gets people sucked in. It’s that surprise at the end that leaves them with more satisfaction,” he says.

When preparing for a show and tell, Reid sets aside some items, anticipating what people will ask for. So when a visitor challenges, “Do you have anything from the Founding Fathers?” he can reach into the safe like a magician reaching into a top hat and pull out a religious book owned by George Washington.

Beyond the Paper and Binding

Most people who enter the doors of Moon’s Rare Books can’t afford to spend thousands of dollars on one book. It’s not a shop for impulse buys, and Reid is just fine with that.

“Really, 99 percent of our time is just spent sharing the stories. The sales occasionally happen — enough to pay the bills and that’s that.”

When sales do happen, 10 percent goes to humanitarian projects. Reid served his mission for The Church of Jesus Christ of Latter-day Saints in South America, so he feels a strong pull to do humanitarian work in that corner of the world. He works with Generations Humanitarian and visits twice a year. The support of the bookstore feeds almost 700 children every day in two orphanages in Peru and six drop-in centers in Colombia.

“If we weren’t feeding them, they would not be eating,” Reid says. “We want to be responsible citizens of the world. If our bookstore is able to do well, then we want proceeds to help other people. And this is how we have found a way to help the most.” 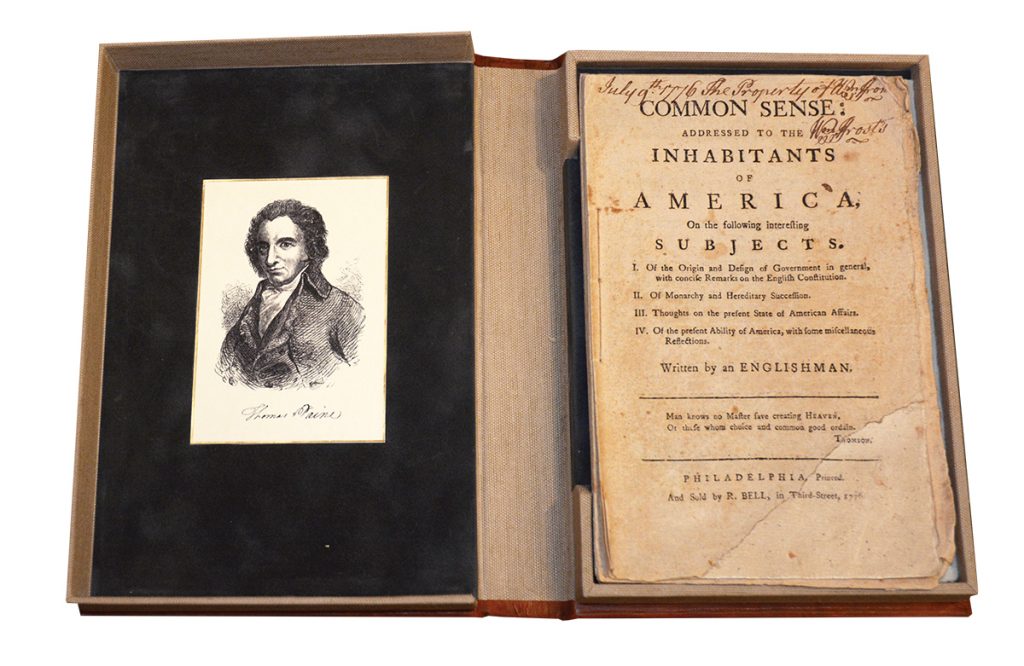 Revealing an original copy of the book that changed the course of American history is one of Reid’s beloved showstoppers. (It was practically in the room where it happened.)

This copy of “Common Sense” was owned by a Boston merchant named William Frost who didn’t sign his name in the cover until after the Declaration of Independence.

Reid specializes in documents from early American history, which comes in handy when school groups enter his doors.

“For us to be able to show documents and books from the period of the Founding Fathers is quite impressive for these young students. It brings history to life,” he says.

Brigham Young’s Copy of the Book of Mormon, 1876 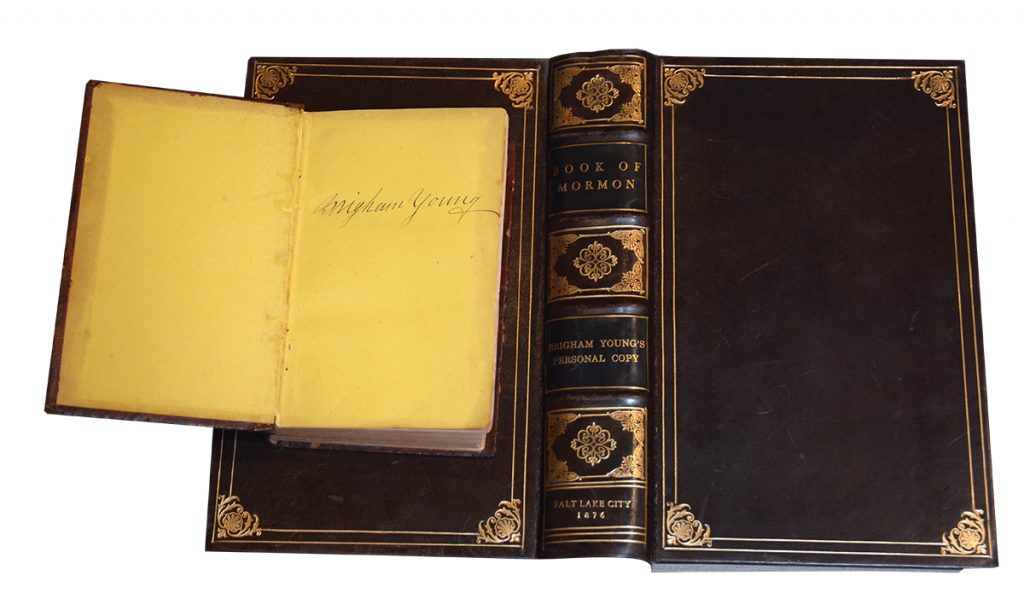 This copy of the Book of Mormon was printed in Salt Lake City in 1876 and is the last one Brigham Young owned before passing away in 1877.

Reid’s Book of Mormon collection includes more than 4,000 copies representing every edition ever printed. It’s quite possibly the largest collection of the Book of Mormon in the world. He also owns books from the libraries of 13 of the 17 prophets of The Church of Jesus Christ of Latter-day Saints. 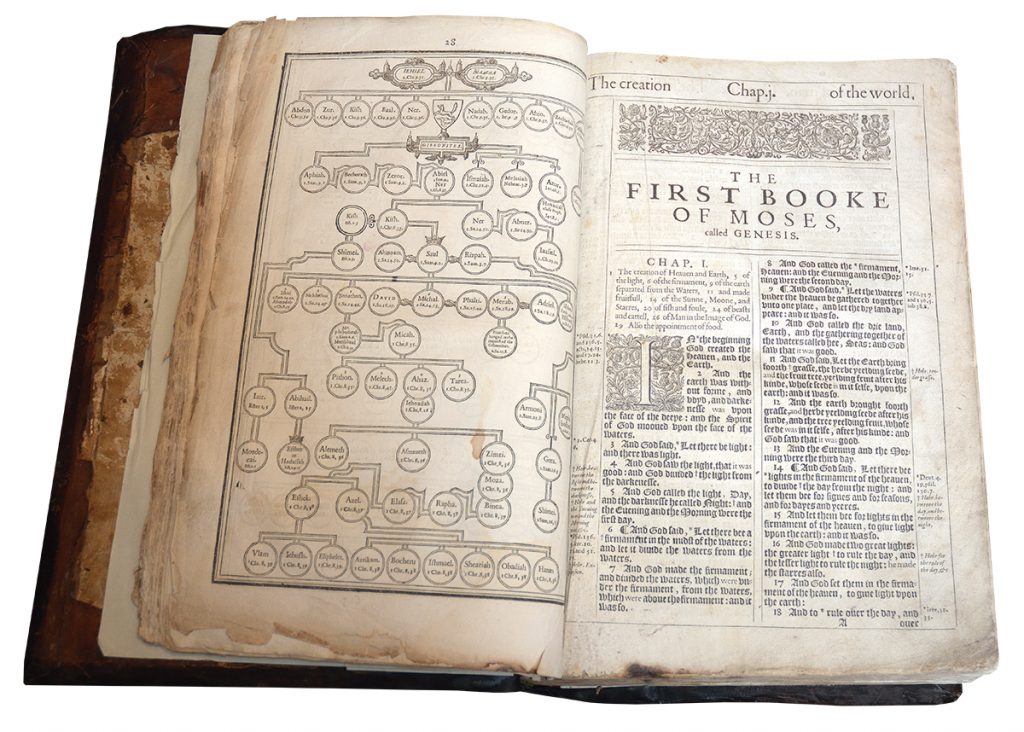 Also in the back vault of Moon’s Rare Books sits a first edition of the King James Bible from 1611. The biggest book and smallest book Reid owns are both copies of the Bible.

“We have a Bible that weighs 70 pounds and is two feet tall, but we also have a bible that is the size of a ladybug,” he says. 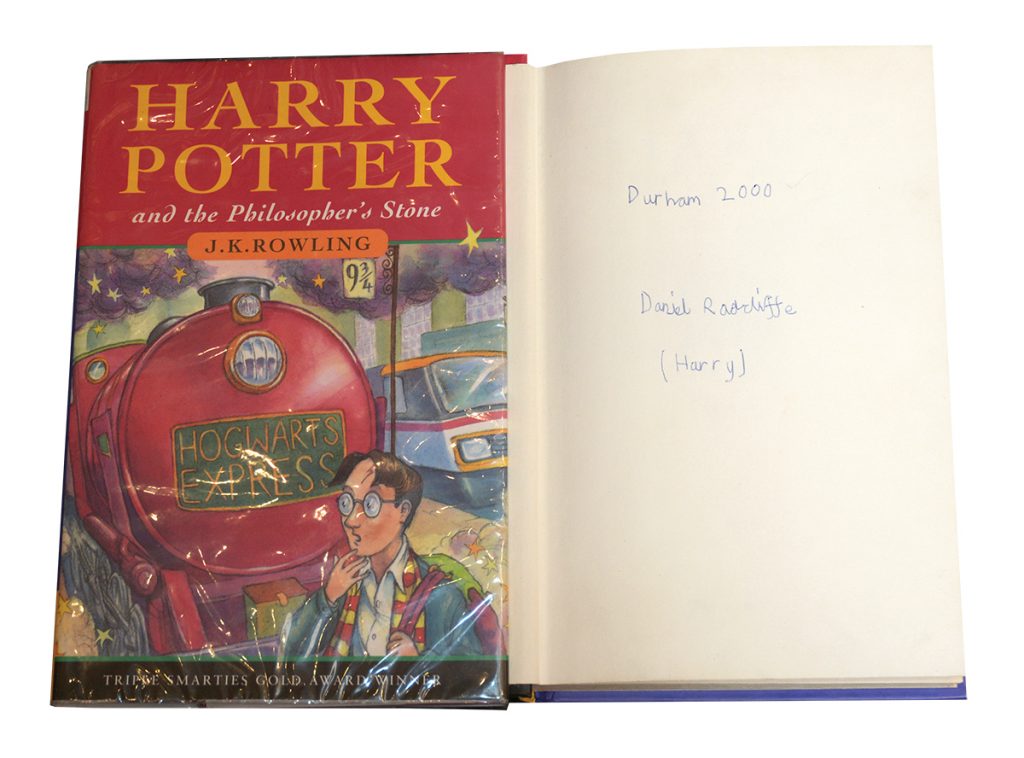 This 1997 first edition of Harry Potter and the Sorcerer’s Stone is made more valuable by the signature of an 11-year-old actor, Daniel Radcliffe. He signed it while filming the first movie and wrote the name “Harry” in parentheses as if no one would recognize his name.

From Marriage and Fatherhood to Playing on Both Sides of the Rivalry, Austin Lee Comes at College Football with a Wider Approach Previous post

On the Mend: The Conservation Lab at BYU Repairs Curated Treasures Next post