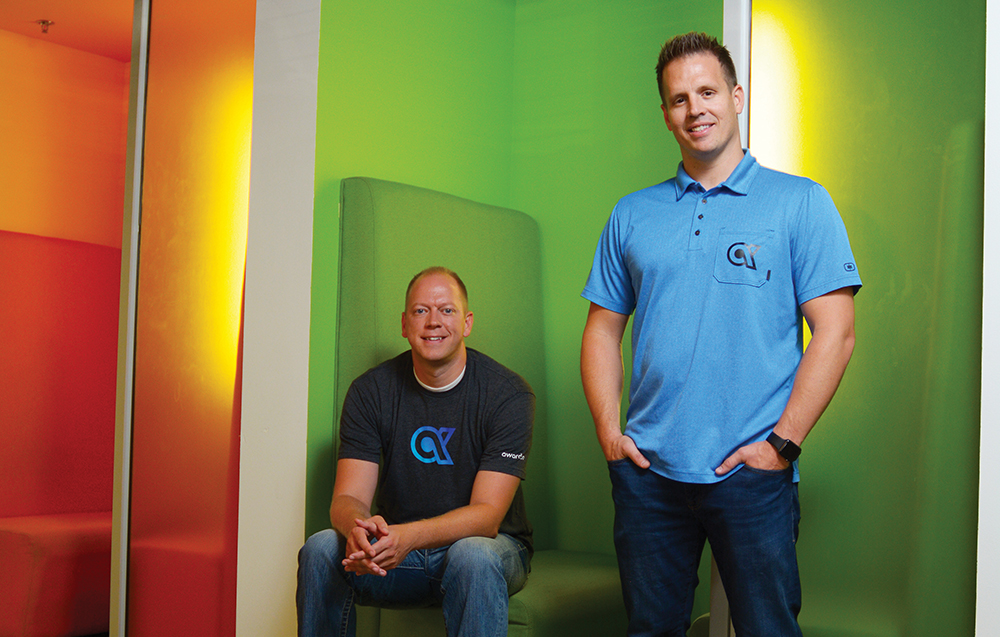 GIVE THEM ALL THE AWARDS. The UV50’s No. 1 Fastest-Growing Company — Awardco — has some serious name recognition. This Orem business has redefined an industry and created “trophies” fit for the 21st century employee. Powered by a partnership with Amazon Business, Awardco boasts more than 1 million users, a 96% satisfaction rating, and nearly $9 million in sales for 2018. It works in 100+ countries (from here to the Amazon, naturally), ranked No. 25 on the 2019 Inc. 500, and two years ago was named a Startup to Watch in this right here UV50 contest. (Award 500 points to BusinessQ, please.) Now, founder and CEO Steve Sonnenberg talks wins, losses and the pathway to better bosses.

In 2011, my business hit a wall. I lost everything, and I needed a rebound. Big time.

Growing up in Chicago, my father worked in the employee recognition space. He was an independent sales rep for companies like Jostens and worked with big corporations like McDonald’s and Motorola. It was your typical shop with traditional rewards — plaques, rings, trophies. He was successful, and I grew up wanting to do what he did. But I wasn’t going to do it the way he did it.

I was a computer science major in college. It quickly became clear that this old school recognition industry needed some new school technology.

I decided to build a recognition program around Amazon and other online retailers. I teamed up with my cousin Mike Sonnenberg, who also studied computer science. He had been working for a number of local tech companies and was one of the original developers of Jane.

I approached Amazon with my great idea. They said no. We built it anyway.

We built our platform to give employees choices. We wanted to create a way for companies to let employees choose rewards they actually cared about.

We streamed Amazon products onto the Awardco platform where employees can recognize and reward monetary points. For example, Vizio — who was an early adopter of ours — would have their managers reward points. Employees would redeem. We would manually fulfill the orders. The software was simple to use. There were no markups. And it worked! The model was legit.

The problem? Sales came in rapidly, and with our manual fulfillment we couldn’t keep up with the growth. Another hiccup? A client like Vizio would push a lot of money through, and we would get flagged as “fraud.” There were a number of growing pains we had to work through.

At the time, Awardco was still a side hustle. I had a job at Qualtrics and Mike had a job at Reading Horizons. I would take Awardco calls on my lunch breaks and spend every spare minute trying to get it off the ground.

In 2014, we were finally ready to take the leap and go full time. Mike and I were joined by Tanner Runia, who I met working at Qualtrics. He has become a founder in every way that matters.

We got a call from Amazon in 2015. “What are you doing over there?” they said. “You’re funneling a ton of business our way!” Next thing we know, we’re at an Amazon boardroom in Seattle presenting Awardco for the first time.

By the end of 2015, we integrated with Amazon Business. We worked together to automate the ordering, integration, and fulfillment processes. So not only did we build the dream, we could finally scale.

Our next focus was global expansion and integrating with Amazon warehouses around the world. We’re now in more than 100 countries, and our footprint is large — and getting larger. We have millions of employees using the platform, and we work with organizations that have 10 employees all the way to some of the largest companies in the world.

In 2018, we entered into an official partnership with Amazon Business.

We offer more than just our partnership with Amazon Business — hotels, eGift cards, event tickets, prepaid credit cards. You can even upload your own swag store. We’ve got companies covered.

The non-cash incentive market in the U.S. is a $90-billion space. Our goal is to take half of that incentive spend: $45 billion. And we’ll do it. That’s what we’ve built here.

This was truly a case of the “naive entrepreneur.” It’s only naivety that let’s you think you’ll be able to integrate your business with Amazon. Now I meet almost daily with Amazon Business to talk about the future, and the biggest company in the world gives us all the resources we need. Amazing.

My dad is proud of me — but he doesn’t understand the company. The technology is lost on him. But if you want professional custom jewelry and plaques, hit him up in Chicago. No one does it better.

After trying to save my company in 2011, my family and I were starting back at ground zero. I somehow convinced my amazing wife to let me purchase the Awardco name for $5k on a credit card. I’ve seen the lows of the lows. And in the hardest time of my life, Awardco was born.

On the Mend: The Conservation Lab at BYU Repairs Curated Treasures Previous post