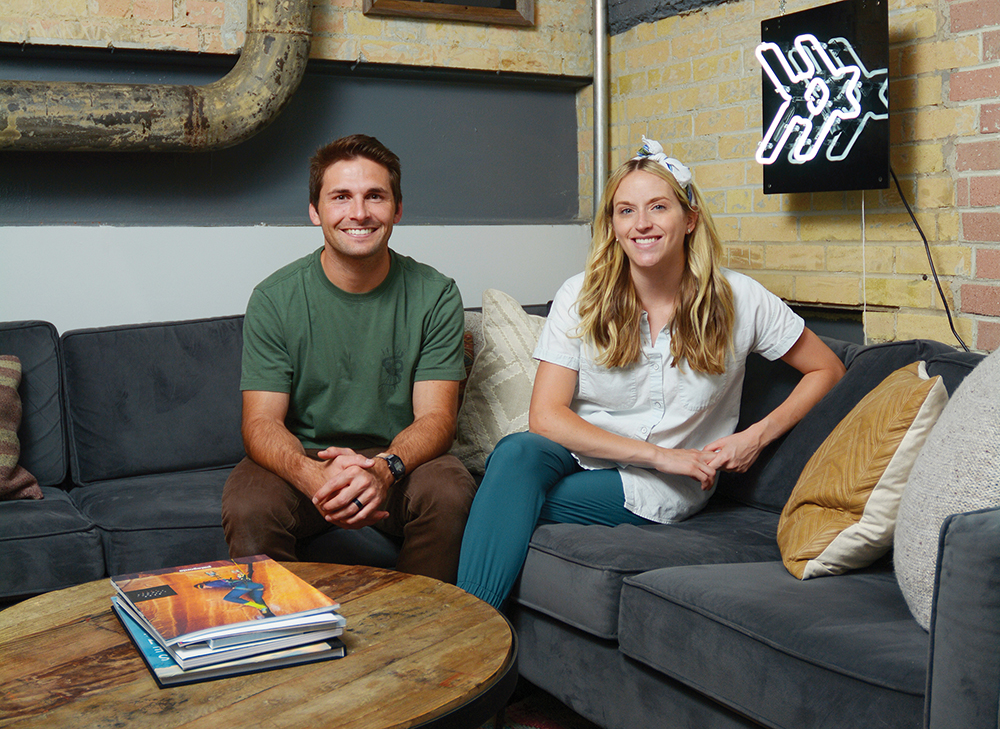 Colby and McKenzie Bauer have had three babies — two young human daughters and one bouncing bundle of Threads. “We’ve had this business baby from day one, and running Thread Wallets has definitely made parenting easier,” says McKenzie Bauer. “As business partners, we learned how to be committed and loyal, and how to work through disagreements and disappointments. No matter what goes wrong, the sun always rises the next day, and the world doesn’t end. But if you’re not committed to each other, it will divide you.”

What’s on your wallet? Colby and McKenzie Bauer are right on the money. Their company, Thread Wallets, offers minimalist wallets with personality to the max. So long, boring and bulky! Sports, travel, nature, art, adventure — there’s a design for every person and pocket. Speaking of adventure, in four short years, the Bauers have weaved their business from Hawaii to McKenzie’s childhood bedroom to a Provo office with 14 dedicated team members. Thread Wallets did $4 million in sales in 2018, has 156k Instagram followers, and has nearly 5,000 five-star reviews. Credit where credit is due. Here, McKenzie and Colby share their story and street Thread.

COLBY: Our story starts in high school. I was on a flight with my dad and best friend. We were drawing some unique designs, and I told my dad I wanted to put them on T-Shirts and hats. You know — every kid’s dream.

“You should actually do this,” my dad said. And all of a sudden my vision became a reality. We sold them at local skate shops. It was so cool to see strangers wearing my shirts.

Fast-forward to college. I was going to follow in my dad’s footsteps and graduate in financial advising at BYU-Hawaii. I was at a fork in the road: Get a job, play professional soccer, or start a business.

Minimalist wallets were getting popular at the time. But there were hundreds of them online — and zero of them were expressive. They were all just boring.

I designed an elastic wallet and sewed it up on McKenzie’s sewing machine. Then we looked into sublimation printing to see if we could print on the elastic. We could! And that’s when I saw the massive potential. The possibilities for expression and personality were endless.

MCKENZIE: I remember him pulling into my driveway — so stoked — and throwing me a wallet with the poop emoji printed all over it. We had just started dating, and I was like, “Cool, cool, cool.”  (laughs)

We got married. Then we did a crappy Kickstarter to raise enough money to buy a printer. We printed a thousand wallets, and then we headed back to Hawaii to test the waters.

COLBY: Which brings us back to that fork in the road. We prayed about it, and we decided to come back to Utah and give the business our best shot for six months.

We launched our second Kickstarter. Raised $35,000. Then we launched our website a few days later. We made $16,000 that first weekend — and that money was eye opening to us.

MCKENZIE: We filed for a patent on the wallet. We doubled down on influencer marketing, and we were living out of my parents’ house.

COLBY: There were wallets everywhere. We did production, fulfillment, everything — all out of McKenzie’s childhood bedroom. There were fumes from the heat press. It kinda smelled. And her parents didn’t say a word.

MCKENZIE: Yeah. Huge shout-out to my parents. They were so patient.

COLBY: This was also the man who told me he’d kill me if I mistreated his daughter. And I believed him.

MCKENZIE: You should have. I’m his only girl.

COLBY: And then he came home every day to watch us fulfill our cute little wallet orders and think, “Who did my daughter marry?” (laughs)

MCKENZIE: But, really. If we failed, what were we out? The power of being broke drove us. It fueled our marriage and our business. We learned to truly lean and rely on each other.

COLBY: We eventually moved to a two-bedroom house. We still couldn’t keep up. We were sewing and printing everything one by one. So we got an office at a strip mall with white walls. It was a little like an insane asylum, but it was still better than our house.

MCKENZIE: Once we started outsourcing, we could start scaling. It was a business-changer — for both our stress levels and growth of the business. We were able to focus more on marketing, creative, and strategic hires. The shift was staggering.

COLBY: We now have a team of 14 people who are super invested in the brand. We moved into this office in 2017, and we’ll be moving into a bigger office soon. Right now the goal is to dominate the wallet market. But in the future, we will be the brand for all-things carry accessories — wallets, phone cases, backpacks, you name it.

COLBY: Oh, and by the way … seeing your products carried by complete strangers? Still completely cool.