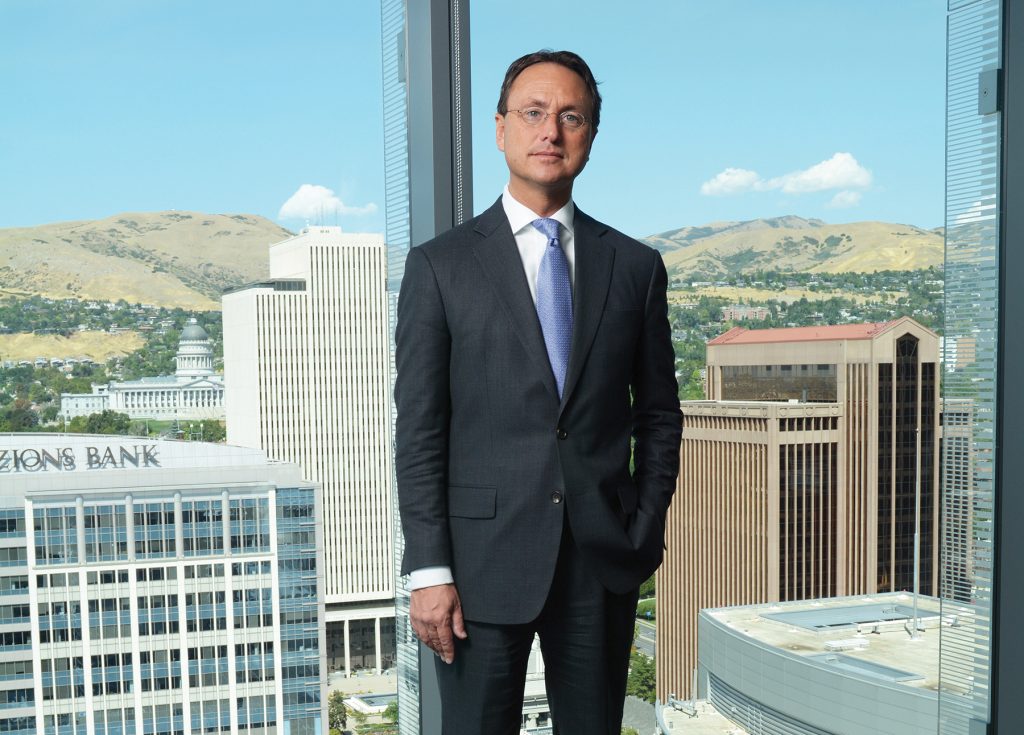 Before Brandon Fugal grabbed a Mountain Dew and sat down for our interview, he showed me a dozen rare artifacts related to The Church of Jesus Christ of Latter-day Saints, including a first edition Book of Mormon and a leaflet from the Book of Commandments that two sisters tucked under their skirts to hide from the mobs. Directly behind this 7-figure religious show-and-tell was Arnold Schwarzenegger’s jacket from The Terminator and badges from the set of The X-Files. Fugal’s child-like excitement spans from historic to pop culture, from religious to paranormal, from real estate to red tape. Through Colliers International, Fugal has built his career on slopes made of silicon — and rebar. His name is on more signs along the Wasatch Front than Domo, Homie and RC Willey combined. You know his phone number, now hear his story.

I graduated from Pleasant Grove High in 1991. I was an unconventional student body president. I wasn’t a jock or a straight-A student. I had my own rock band and radio show. I wore a suit one day a week just to screw with people’s heads. I haven’t changed since high school.

I was conflicted as a teenager. I wasn’t sure if I should devote myself to a career in business or focus on music. My band was called Peter Dragon, and we wrote Depeche Mode-type music. We played at the 49th Street Galleria and other places.

As a senior at PG, my favorite movie was “Wall Street” starring Michael Douglas. It’s iconic. I developed a deep fascination with business and which types of personalities were the key decision-makers.

I had a leadership scholarship to what is now UVU. I scheduled my classes in the early mornings so I’d have the rest of the day to focus on my career. I was listing properties and building a business when I was called to serve an LDS mission in Hawaii.

As my mom and dad were driving me to the MTC, we drove past one of my office building listings on University Avenue. I had them stop and take my picture right there at 2696 North University in my suit and tie.

I consider myself deeply spiritual. Not a day goes by I don’t reflect on my mission, where I was the only missionary who had a brick phone and kept up with business back home. It didn’t say “no cell phones” in the handbook at that time.

My faith continues to guide me. But I swear more than anyone in the office. I’m unconventional and  somewhat irreverent. I’ve endeavored to keep my child-like curiosity and excitement for business and life alive. But it’s true what people say about me. I don’t own a pair of jeans.

In the beginning, I was starving to death. Anyone who tries to launch a career in this space has to be patient. There’s a long sales cycle associated with transactions. It’s not uncommon to go years without making a living. Many of the most iconic buildings that dot our landscape took years of negotiation and paperwork.

I launched my own brokerage in 1998 called Coldwell Banker Commercial at age 25. I was a bit of a novelty. But now I’m the old guy at the table at age 46. That sucks. I don’t feel old. I feel like I’ve been running a sprint my whole life trying to accomplish as much as possible, not only in my business pursuits but also with my hobbies and other interests. I believe my best years are ahead of me.

Our company is now Colliers International. We have the largest research and data division of any commercial real estate firm in Utah. With our offices in the new Grove Tower in Pleasant Grove, we are positioned for even greater growth and influence in the business sector of Utah County. As of this morning, we control 84.64 percent of the market share in Utah Valley. I’m not aware of another commercial real estate office in the country that commands more influence in a major metro than our firm.

I remember when Josh James and John Pestana — two visionaries in Utah County’s history — launched MyComputer.com and evolved to Omniture. I’ve been part of the journey as these incredible men are now leading Domo and ObservePoint. I remember when Ancestry was a tiny company in 2,000 square feet behind the Orem Post Office. I have witnessed the greatest renaissance of our time in real estate and business creation. Right now is the age of collaboration and of leveraging information and intelligence. This hockey-stick curve we’re on is amazing.

To me it has been important to combine aviation with commercial real estate. To give my clients a bird’s eye view of the market, I take them up in a state-of-the-art black helicopter. It’s total badass. My brother is our full-time pilot and the finest aviator in Utah. I look at the helicopter and jet as tools critical to decision-making but also as time machines to envision the future. We do have to be judicious in our use of aviation because it’s not cheap, but it can be invaluable in helping executives develop strategy as they see options from above.

My story, in many respects, is a story of the development of the Wasatch Front that prepared for the rise of Silicon Slopes. I have grown up along with the market, even though I couldn’t have imagined the growth of Silicon Slopes and the transformation of our skyline. It’s been a privilege to have a seat at the table.

Tall Tale: Heather Gneiting has come a short way down I-15 from Pleasant Grove High to BYU Next post