Home Sports BYU Tall Tale: Heather Gneiting has come a short way down I-15 from Pleasant Grove High to BYU 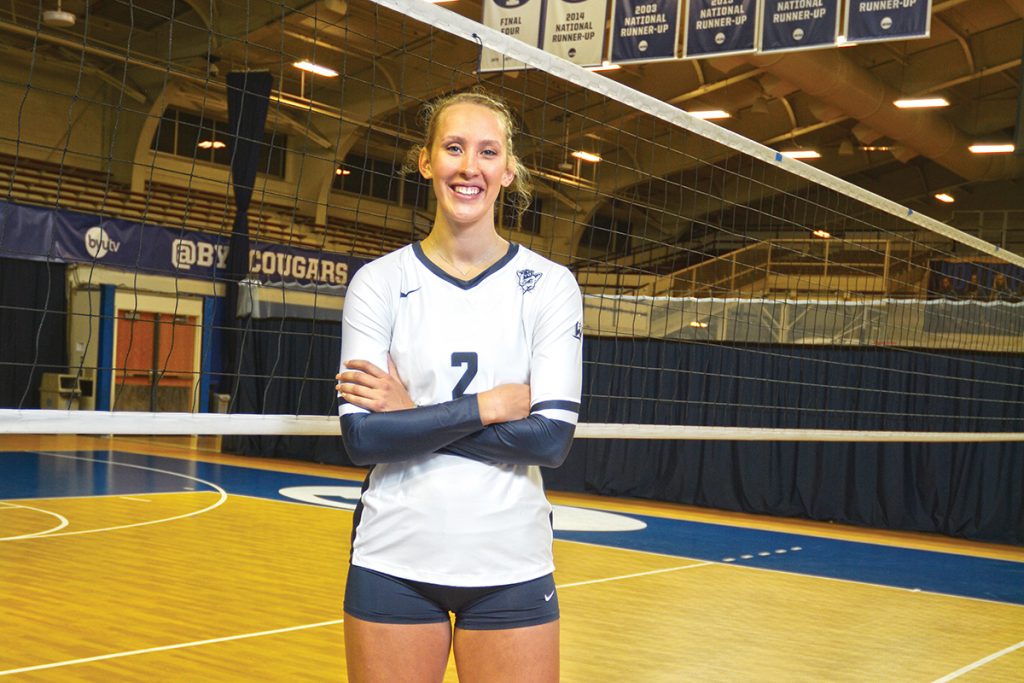 Heather Gneiting has a hard time sneaking past anyone. The 6-foot-4 superstar middle blocker for the Cougars makes a statement when she walks into a room.

Even as a freshman entering the coaches’ offices at BYU, she sent expectations soaring.

“They asked about my goals as we started the season,” Heather remembers. “I mentioned wanting to learn my role on the team and improve each game. The coaches said, ‘We think you could be the national freshman of the year.’ That opened my eyes to the possibilities.”

After a season that saw the Cougars go to the Final Four and Heather take a progressively larger role with the team each match, she was floored when she got the official news.

“I was lifting weights and Coach Olmstead pulled me aside and told me I’d been named the AVCA’s NCAA Freshman of the Year,” Heather says. “I was super grateful to be recognized, but it really is a team award.”

A team award no other Cougar volleyball player has earned.

It also opened international doors for the Pleasant Grove native. She spent the summer traveling — first to Japan with the U.S. Collegiate National Team and then to Mexico with the U.S. Women’s Junior National Training Team — representing the red, white and blue and gaining experience to bring back to the Smith Fieldhouse.

“In Japan, the teams are so good at ball control and their serve and passing games are amazing,” Heather says.

The experience with the junior national team opened her eyes to little things a player can bring to an elite team.

“Our coach (Texas coach Jerritt Elliott) reminded all 20 of us that we were on the same level, so those who would make the team would stand out as far as attitude and teamwork.”

Now, as her sophomore year begins, Heather knows she needs to take an even larger role if BYU is going to sniff the success they had last year.

Besides Heather, the Cougars will be led by senior libero Mary Lake, senior outside hitter McKenna Miller and junior middle blocker Kennedy Eschenberg — all four of whom are returning All-Americans.

Favorite hangout “When I was in high school, we would go up to Tibble Fork all the time and go paddle boarding.”

Favorite local restaurant “Taco Amigo in Pleasant Grove. My friends and I would go there so much — especially when they had their peach shakes, usually around the start of September.”

Why BYU? “There is a family atmosphere on the team. Plus, the coaches are open and approachable. They develop players. They could see my potential when I couldn’t.”